Remarkably, George Friedrich Handel’s 1727 opera Richard the Lionheart (Riccardo Primo) is receiving its US premiere in this 40th Anniversary season in a felicitous and eminently singable English translation OTSL commissioned for the occasion from Lee Blakely and Damian Thantrey.
I am not sure what the rest of the opera world is doing for virtuosic singers this month since they all seem to have converged on the stage of the Loretto Hilton Theatre for this memorable production. OTSL has assembled a brilliant cast of vocalists that more than meets the interpretive challenges of this rich and diverse Handelian score.
In the title role, counter tenor Tim Mead is a revelation. His is a major operatic talent. His pliable, meaty vocal gifts are wedded to a trip hammer technique that not only accommodates unimaginable rapid-fire delivery, but can also bend to the requirements of limpid, bel canto singing of the first rank. As an interpreter, he is meticulously stylish but also quite fearless. 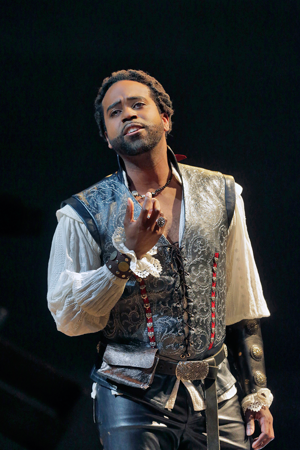 Tai Oney as Oronte
Mr. Mead’s take-no-prisoners presentation of his Act One closing aria was one of the most exciting, raw moments I have experienced in many a day. He is a consummate technician, to be sure, but Tim also takes risks. He lets it all hang out. His abandoned emotional investment in the moment worked the audience into a cheering frenzy at curtain. Later, he paired with Costanza in a languid, extended duet of romantic lyricism that bordered on the erotic. With this totally winning traversal of Handel’s Richard, Tim Mead has served notice that he is a new star in the operatic firmament.
As Costanza, Susannah Biller was every bit his equal. Having only ever experienced her accomplished Adina in last summer’s Elixir of Love I had no idea that she was capable of such depth and daring. As one of the “dueling divas of the day” in this opus, the role of Costanza has much of the pained, limpid, melancholy singing at which Ms. Biller certainly excels. But there is much more in reserve in her arsenal.
When real spunk and fire are required, she can deliver the goods with astonishing results, refulgent tone, and apparent ease. The duet I already mentioned was a highpoint, the emotional and musical core of the production. But Susannah also made the most of her opportunities to shock and awe with confrontational outbursts when her soprano found even more delicious fullness.
Her rival (and “diva challenger”) Pulcheria was no demurring seconda donna, no. Devon Guthrie took the stage with consummate professionalism and knocked our socks off with pyrotechnical vocal displays that make the New Year’s Eve fireworks in Sydney Harbor pale in comparison. And while we were sitting there duly dazzled, Ms. Guthrie changed gears and showed an effortless affinity for comedy and dramatic commitment alike. Her aggressive, flashy soprano reminds me of the colorful Simone Kermes, without the eccentricity.
I can remember a time in a galaxy far away when the world’s counter tenor roster began and ended with Paul Esswood. How times have changed. It is a case of an embarrassment of riches that the Richard the Lionheart cast list also includes the likes of countertenor Tai Oney as Oronte. Mr. Oney sports a sound technique and spotless coloratura delivery, but what I especially liked was his personalized, dusky timbre. His handsome bearing is icing on the cake of such distinctive artistry. 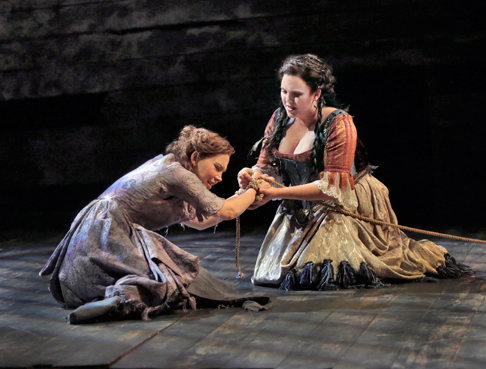 Susannah Biller as Costanza and Devon Guthrie as Pulcheria
Brandon Cedel excels as the calculating Isacio, his virile, resonant baritone rolling out effortlessly through the house. Mr. Cedel is a skilled villain and his poised vocalism made us love him in spite of himself. This is a gorgeous, mellifluous instrument. Even in the least flashy role of Berardo, Adam Lau makes a substantial impact with his full throated, robust baritone. He is one of the most sympathetic characters in the opera, and his vocal performance was emphatically in a league with his colleagues.
The physical production was a thing of sublime achievement. Jean-Marc Puissant has devised sets and costumes that give significant pleasure. I loved the simplicity of the raked platform with the textured ground cloth. I loved the presence of the “artistic” ship wreck upstage in Act One, and the re-invention of that concept in subsequent scenes. Act Two might have provided a rustic hut for Peter Grimes had it not also included a royal throne. In fact, each scene uses “the shipwreck” as its visual inspiration. Puissant’s evocative, luxurious costumes were grounded in the century of the opera’s premiere, rather than the Crusades of Richard’s experience.
The peripatetic Christopher Akerlind designed lighting that was in complete service of the direction and the dramatic moment. The lantern effect for the love duet alone was worth the price of admission. Gorgeous atmospheric illumination from first to last. As always, Tom Watson’s wigs and make-up were so good as to be taken for granted. Mr. Watson is a real company treasure. 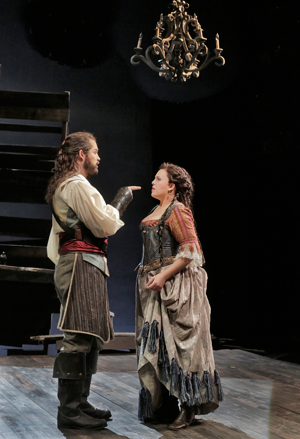 Brandon Cedel as Isacio and Devon Guthrie as Pulcheria
Director Lee Blakely has contributed a vision seeming so spontaneous as to be invisible. But make no mistake, Mr. Blakely has made some bold and innovative decisions. I loved the uses of levels to convey power struggles. The character relationships are richly detailed and commendably specific. How about that incestuous kiss dad Isacio forces on daughter Pulcheria in Act One? The audience shifted in their seats uncomfortably. Electric!
Grant Lewellyn led a taut performance that gave much musical satisfaction. Some judicious cuts may not please all purists, but the flow and running time of the show benefited greatly. Maestro Lewellyn exerted supreme control over his forces, and conducted a commendable, dramatically and musically compelling performance of Handel’s Richard the Lionheart.
My only quibble in a night that went from strength to strength is that the exit of soloists immediately after they had finished singing a few of the arias prompted the audience to applaud over the remaining orchestral playoffs. I would very much like to have heard those pieces through to musical conclusion. But that is a small (and fixable) consideration in a totally enjoyable evening spent reveling in the discovery of a ‘new’ opera.
James Sohre