Celebrating its fortieth anniversary, OTSL’s current season has favored us with a stunning new production of a late 20th Century masterpiece, Emmeline by composer Tobias Picker and librettist J.D. McClatchy. The piece was commissioned by Santa Fe Opera where it premiered in 1996. Having garnered glowing reviews and international attention, Emmeline was mounted to similar acclaim at New York City Opera in 1998. And then, like Evita’s corpse, it inexplicably disappeared. . .
Or almost. There was a scattering of scaled back performances, but the current revival is the first major full scale production in seventeen years. I would hope that the persuasive performance I experienced in the Gateway City might inspire other companies to similarly embrace its manifold riches.
First, Mr. Picker has fashioned an accessible, melodic score that nonetheless crackles with contemporary musical commentary and post-modern invention. The orchestral writing is lush one moment with undulating layers of overlapping neo-romantic strings, then jagged and impulsive the next with jittery winds skittering nervously above and around a cantus firmus.
Folk melodies are hinted at, although only Rock of Ages is a real quote and at that, it is ornamented with a disturbing subtext, a parody of a rather hysterical country fiddle. When tragedy looms there is an imposing, heart-sickening stretch of ominous themes intoned in quadruple (quintuple?) octaves that pierces the soul. 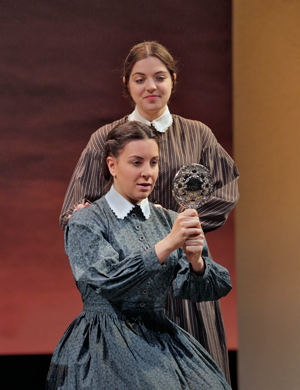 Nicole Haslett as Sophie and Joyce El-Khoury as Emmeline Mosher
Best of all, this is Picker’s most accomplished vocal writing. Mr. McClatchy’s lean, mean libretto has nary a false move, and the composer responds with appealing, straight forward declamations that are natural yet pleasing to the ear and appropriate to the situation. When things get more heated, the composer uses the text as a springboard to craft escalating lines of arching intensity, mounting musical tension, and cataclysmic dramatic resolution.
In later operas (An American Tragedy, Dolores Claiborne) I sometimes felt Picker occasionally unnecessarily taxed the vocalist to, and sometimes beyond their limits. Not so here. Every phrase of Emmeline seemed apt, inevitable, and well considered.
In the pit, George Manahan commanded a compelling reading that found every soaring statement, every telling nuance in place. The Maestro elicited superb colors from his band and found an unerring balance with the stage. He ably partnered the drama at every moment, nay, he prodded it forward, in a thrilling reading that was by turns edgy, serene, searing, soaring, contemplative, and bombastic. Mr. Manahan has a reputation for drawing inspired work from instrumentalists and vocalists in such “new” works, and he united his forces in a spellbinding ensemble.
The title role is a tour de force for a soprano, and the original Emmeline, Patricia Racette found her career kicked into high gear with her Santa Fe success. I have no doubt the same should happen with the current star Joyce El-Khoury. She is luminous in the part. (Ms. Racette was in attendance opening night at OTSL to cheer on her successor.)
Ms. El-Khoury had it all. She is possessed of a substantial lyric voice that has spinto leanings. Her sound technique allows her to encompass every diverse requirement of the score. She has an attractive and appealing stage presence, and her stage savvy allowed her to completely immerse herself in the emotional journey of the unfortunate girl. And oh, the things she is called upon to communicate!
Emmeline is first used by her poor family. She must leave home and become the bread winner by working in a de-humanizing mill. When her loneliness leads her to become impregnated by her married employer, the family derides her. She never sees the child that is taken from her at birth. She matures into an aloof caretaker of her ineffectual parents, but then a young man unexpectedly enters her life, and they eventually marry. Emmeline soon discovers in horror that she has had an incestuous relationship with the son she had never known. Abandoned, she remains resolutely steadfast in her motherly love for her son. Such is the stuff of great tragedy. 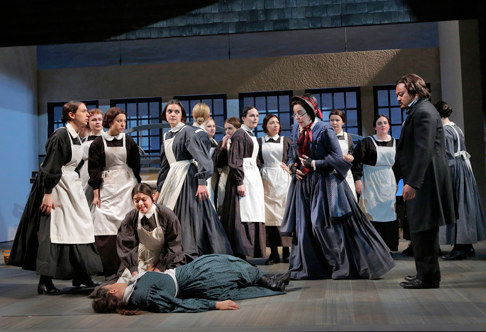 Nicole Haslett as Sophie, Joyce El-Khoury as Emmeline Mosher, Renee Rapier as Mrs. Bass, and Geoffrey Agpalo as Hooker
This dramatic evolution afforded ample opportunity for Ms. El-Khoury to regale us with the full gamut of a singers arsenal: gleaming phrases poured out above the staff, invectives hurled with fire and conviction, plangent utterances of despair, melting professions of radiant romantic happiness, and introspective pianissimo singing that touched the soul. Joyce El-Khoury’s Emmeline is the gold standard against which all future interpreters will be measured.
As her strapping son Matthew Gurney, tenor John Irvin was appealingly boyish and irresistibly charming. He used his secure, brightly focused lyric tenor to create a most engaging portrait. Mr. Gurney exhibited a fearless precision as he executed each and every high-flying outburst that the composer devised for the impassioned lad (some seemed scored where only dogs can hear!), while also commanding a warm and appealing sweetness as the situation required.
Meredith Arwady as the manipulating and judgmental Aunt Hannah proved once again to be a force of nature. I have always admired her, but this is her very best work to date. The part is tailor-made to her gifts, which includes those rock solid, sternum rumbling chest tones. Ms. Arwady’s top voice, on this occasion, was just as thrilling. It glistened with laser intensity. The voice is a seamless whole, and this performance may be one of those magic occasions where you have witnessed a major singer hitting the very top of her game.
Wayne Tigges is always a reliable and conscientious performer, and he does not disappoint as the seducer Mr. Maguire. Like Cornell MacNeil, he has such an imposing, steely instrument that I am always surprised by his ability to suddenly change gears to apply a sudden supple use of vocal colors and shading. The role lies high for him (or anyone else), but Mr. Tigges negotiated the angular leaps with skill, even if his baritone can tend to a bit of unruliness approaching the passaggio.
The entire ensemble cast proved to be of the highest standard. RenÈe Rapier made her mark as Mrs. Bass, the school-marmish owner of the boarding house. Ms. Rapier sang with clarity and finesse, and communicated a completely realized character (thanks in part to Tom Watson’s effective wig and make-up design). Mill girl Sophie was assumed by Nicole Haslett who sported a shining, fresh soprano in a fiery and sympathetic performance. She was complemented by a nice turn from Lilla Heinrich Sz·sz as millworker Ella, who offered a limpid, pure vocal characterization. 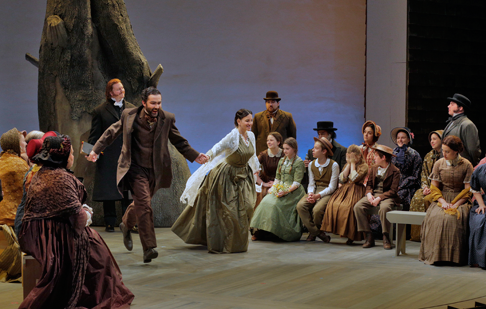 John Irvin as Matthew Gurney and Joyce El-Khoury as Emmeline Mosher
As the mean-spirited sister Harriet, Felicia Moore was every inch the woman-we-love-to-hate. Her solid singing was tinged with spite and provocation. Pastor Avery was well-served by Daniel Brevik’s ample bass. Erik Van Heyningen’s pleasing baritone shone in the brief phrases allotted to Simon Fenton. Matthew Lau’s characterful baritone struck just the right note as the hapless father Mosher. As Hooker (the factory foreman, not a lady of the night) Gerdine Young Artist Geoffrey Agpalo just flat out nailed the part, as much for assured temperament as for spot-on stratospheric outbursts of steely tenor tone. Mr. Agpalo won a deserved ovation at curtain call for his impressive contribution.
In fact, the afore-mentioned supporting cast was peopled with former and current members of the Gerdine Young Artist Program, one of the company’s glories and a major training ground for performers who often move on to world-wide careers.
An episodic, highly theatrical piece like Emmeline is red meat to director James Robinson, who excels in making riveting, poetic theatre from such source material. Allen Moyer’s well-chosen set pieces were spare and evocative. The paucity of stage clutter suggested the limited means of the characters and the dehumanization of the industrial revolution (the three imposing looms were awesome!).
The company’s new turntable was immediately justified as a worthwhile purchase as Mssrs. Robinson and Moyer put it to effective use beginning with the opening reveal of the family gathered at a funeral. As cast and scenery spun into different positions the effect not only suggested a cinematic cross-fade, but also visualized the shifting emotional states of the leading character. Christopher Akerlind’s haunting lighting design perfectly captured the expansiveness of the bucolic milieu as well is the claustrophobia of societal pressures. James Schuette’s masterful costumes did much to establish time, place and character. The subtle color difference that sets Emmeline apart from the other mill girls in their work dresses is only one of many lovely touches.
But ultimately, it was Robinson’s vision that made Emmeline come leaping to vibrant life on the stage. He ensured that every moment was truthful and focused. His stage pictures evolved naturally. Each transition was carefully choreographed to keep moving the story forward. One beautiful touch was to have Matthew and Emmeline circle the stage and walk past each other repetitiously, pausing to flirt, as the passage of time (and their developing love) was indicated by the yearning orchestral passages.
If there is a better case to be made for the tragedy of poor Emmeline, well, I am not sure my heart could stand it. Opera Theatre of Saint Louis has delivered another definitive performance, one that is a perfect fit for the intimate Loretto Hilton theatre. Is there any space more congenial to experience the immediacy and import of a riveting operatic performance?
Forget about the Arch. Forget about the Cardinals. Emmeline is currently “the” reason to visit Saint Louis.
James Sohre