Possible answers multiply. San Francisco Opera music director is the Italian conductor Nicola Luisotti who will have held sway. Perhaps San Francisco Opera concurs that it has not had success with its recent premieres by American composers so thinks a journey back to the wellspring of opera might be a good idea.
A further and more palatable idea is that Two Women is potentially a rare story that supports operatic treatment. It is, at least in the eponymous Vittorio De Sica film, a story that has not been artistically explored — the sharing of the sublimely delicate moment when a girl becomes a woman (well, let us forget about Salome for the moment). The De Sica film explores this passage, this dramatic moment, in subtle and startling psychological terms laden in existentialism. The film is a masterpiece. Indeed ripe for opera.
The sound world of composer Marco Tutino supports such atmospheres. Tutino is a colorist who offers surprise after surprise in his score for Two Women, timbres that are hardly new — the bass clarinet for example — but were strategically placed to evoke heretofore unfelt sensations. Without creating an explicitly individual style Tutino avoids any derivative definition, though one might say that his conservative twentieth century sound has its roots in the verismo of Giordano but remains open to incorporating later techniques when called upon, like his very effective use of minimalism.
The opera Two Women or its Italian title La ciociara surely rides the coattails of the De Sica film so to be able to gain Italian and international attention. Comparison is therefore unavoidable, appropriate and in fact enlightening.
The De Sica film is derived from a novel, La ciociara (1957) by Italian novelist Alberto Moravia (Ciociara is a region of bleak and rocky hills south of Rome). Two Women was the title given the English language translation of La ciociara. The libretto for the opera Two Women is derived from a script by one Luca Rossi, it in turn derived from the Moravia novel. 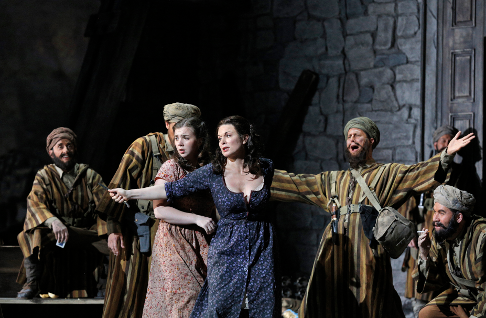 The two women and their Moroccan rapists
Unlike the film which focuses on the complex psyches of the two women and absolutely nothing else the libretto delves into the Italian or rather human psyche that in wartime abdicates principle to collaborate with whoever or whatever is powerful at the moment. The libretto creates villains, from the Nazi commander to his local collaborators and to the Moroccan mercenary thugs who rape the two women. A powerful sense of evil is created that is pitted against the survival of the two women and their young male soulmate. That the daughter achieves womanhood in a singularly brutal fashion becomes the secondary, and less important story.
Though it is a thoroughly Italian event the only Italian in the cast was mezzo-soprano Anna Caterina Antonacci as the mother (who by-the-way gives Sophia Loren a run for her money as the costuming intends). Her daughter was sung by American ingenue soubrette Sarah Shafer. While vocally appropriate — a warm, lower voice for the mother and a higher, much brighter voice for the daughter — the two heroines were not physically matched, troublesome in the often cinematic circumstance of this production. 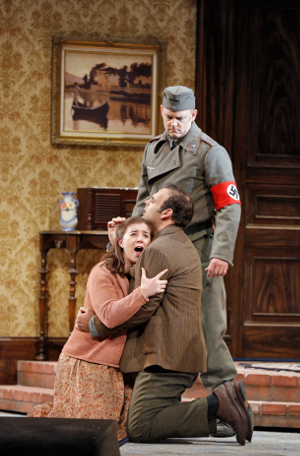 Sarah Shafer as Rosetta and Dimitri Pittas as Michele with Nazi soldier
The young, pacifist school-teacher who infatuates both mother and daughter was sung by American tenor Dimitri Pittas (enough of a look-alike for Jean-Paul Belmondo from row P). The two villains were San Francisco Opera’s Scarpia, Mark Delavan as Giovanni and SFO’s Hoffmann villain, Christian Van Horn as the Nazi commandant.
Marco Tutino also created the libretto for his opera. It was staged by an all-American team (or at least all English speakers). The staging was a combination of cinematic scenes, docudrama of the advancing American forces in the liberation of Rome, the storybook fantasy of a verdant hilltop village in the arid region south of Roma as a sort of paradise, cut-out sets ‡ la American musical and, yes, even moments of old fashioned opera.
The action unfolded in a series of vignettes that incorporated this potpourri of styles culminating in a complex, indeed impressive number (it is a numbers opera) where the action flip flopped between the rape of the women and the murder of Michele (the Belmondo role). Effective also was the scene of the Italian pop-crooner allowing composer Tutino to indulge in musical collage before he imagined a fairytale ending for his opera — a vision of the dead Michele walking toward the dream hilltop village.
The opening night audience accepted the opera as an old fashioned melodrama booing the villains, cheering the damsel (forgetting for the moment that she perhaps was not saved after all), and of course warmly thanking Mme. Antonacci and Mr. Pittas for ably holding their own against their cinematic competition (Loren and Belmondo). Comments overheard as the crowd left the theater were less enthusiastic.
As usual Maestro Nicola Luisotti forced his superb orchestra front and center, and it surely sang out all magic possible in Marco Tutino’s score. Interestingly and uncharacteristically the maestro allowed the singers to be actors in this drama rather than his musical puppets.
Said and done, the real opera remains the De Sica film. It creates one hundred minutes of pure lyricism, never descending to the cliches of movies or theater, or in the case of the opera Two Women to the cliches of musical theater.
Michael Milenski