I could not for the life of me understand what the problem might have
been. What I saw was a thoughtful, highly accomplished, post-Beckettian staging
of, well, perhaps the most Beckettian of operas. I could certainly understand
that some people might not have liked it, but not only did the terms in which
it had apparently been criticised seem almost incredibly extravagant; I could
not help but think that those who would not have liked it would in any case not
much have liked PellÈas et MÈlisande itself. (And besides, there is
a world of difference between not ‘liking’ something and thinking it
worthless — or at least there should be; it took me two or three years to
‘like’ Elektra, something for which I hold the Solti recording
largely responsible, but it never occurred to me that the work was not a
masterpiece.) 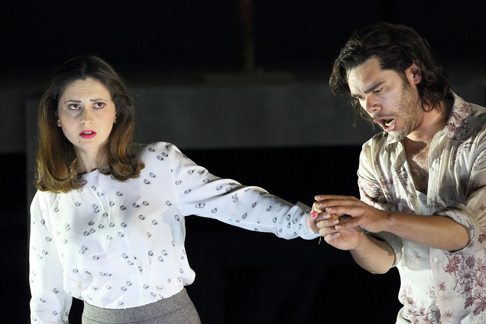 Christiane Pohle’s provocative — in the best sense — new staging takes
place, like the opera, in what we might call, with slight trepidation, lest we
be consigned to Pseud’s Corner, a liminal zone, located at the intersection
of the meaningful and meaningless. (For anyone interested in vaguely modern
drama, which seems, sadly, to exclude vast swathes of opera audiences, the
claim should not seem too outlandish.) What could be more instantly evocative
of contemporary — to us, at least — anomie and ennui than a ‘stylish’,
soulless hotel reception? Staff and guests continue their work, or whatever it
is they do, sometimes stepping into ‘character’, sometimes remaining
‘background’. Just as they might in a royal household, one might add. Much
is absurd, or so it seems to onlookers, yet it absorbs, even if it does not
fulfil. Sometimes it seems to intersect more obviously with the drama,
Debussy’s drama, than others, but even when it appears to be dissociated, it
somehow focuses one’s attention upon what is ‘happening’, or as so often
in this opera, what is not. Spectators on the one hand remain just that, yet on
the other are drawn in. We cannot quite say how or why, just as the characters
cannot, when indeed they can say anything at all. Questions are posed,
occasionally answered, more often provoking another, seemingly unrelated
question, or stillness and silence. I have not seen a staging that more closely
corresponds to the singularity of Debussy’s drama, and yet which also retains
its distance, seemingly — wisely — saying, if this is not for you, then
PellÈas, the score and libretto, the memories you might have: they
remain intact. This is, or could be understood to be, metatheatricality in a
sense both old and intriguingly new; Pohl’s production allows one to take
what one will, if only one is prepared to think or even just to experience.
Sadly, some, perhaps influenced by what ‘opinion-formers’ had told them,
elected to laugh (derisively, at least so it seemed) or even noisily to walk
out. If they wished to leave, they might at least have had the decency to wait
until the interval.

For some reason, or none, I had it in my head that Philippe Jordan was
conducting. I mention that, since I initially assumed that Jordan’s Wagnerian
experience might be the reason for the orchestra sounding more than usually
Wagnerian. It transpired that Constantinos Carydis was in fact the conductor,
yet the echt-Wagnerian sound of the Bavarian State Orchestra
persisted. It was, moreover, not just the sound, but the motivic texture that
so strongly recalled Parsifal, Tristan, and, to a lesser
extent, even the later Ring operas. What often sounds closer to vague
similarity here edged closer at times even to plagiarism. But, as Stravinsky
noted, lesser artists borrow, whilst great artists steal. There are, of course,
all manner of ways to play PellÈas, and doubtless this was shaped in
good part by the orchestra’s heritage, but this was fruitful and, again, in
the best sense provocative. It could not have been much further distant from Esa-Pekka
Salonen’s recent, magnificent Philharmonia concert performance , but had
its own, different validity. Carydis judged well the ebb and flow and at times
brought the score closer to conventional operatic drama than one often hears.
Hearing the orchestra given its head thrilled as it disconcerted, not least in
combination with what one saw. There is of course more Wagner in Debussy than
Debussy allowed, just as there is more Wagner in Beckett than Beckett allowed.
Escape is not an option — or rather it is doomed to fail, if sometimes to
fail better. 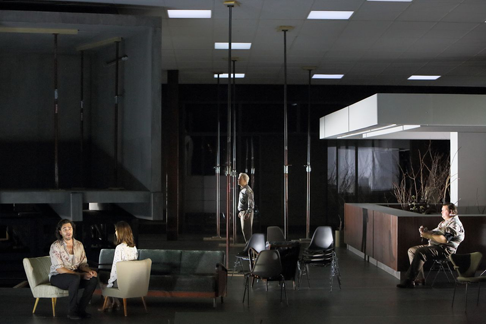 Vocal performances were generally excellent, as were the singers’
responses to Pohl’s often difficult demands. (At least I assume they were
hers: this did not seem improvised.) Elliot Madore and Elena Tsallagova offered
a truly disconcerting — that word again — pair of lovers, their
childishness (weird smiles) married to, indeed productive of, erotic frissons,
almost as much as their command of the vocal lines. Madore’s relatively dark
tone contrasted intriguingly with Tsallagova’s bright, almost doll-like
delivery; both performances contributed to, rather than merely reflecting, our
understanding. Markus Eiche’s Golaud seemed initially a little too gruff, and
his French was not always quite what it might have been, but his portrayal grew
in stature, truly moving by the end. Perhaps that had always been the plan; it
certainly made me think. Alastair Miles’s Arkel properly bewildered. (Is that
not what more or less everything in this opera should?) Was he victim or in
some sense initiator? He refused the either/or, and delivered his text with an
understanding that seemed at times almost to pass all understanding. Okka von
der Damerau’s GeneviËve commanded the stage in a similar yet different way
— again, as befits the character. Her vocal shading was not the least of the
performance’s pleasures, even if we did not hear so much from her as we might
have wished. Young Hanno Eilers was quite the best boy Yniold I have heard; one
could often have taken dictation from him, verbally or musically. Still more to
the point, his fear made perhaps the most powerful dramatic impression of all.
A pointless question, arguably like any relating to this ‘pointless’ opera,
but it was difficult not to ask: what does Fate hold in store for him?

Was I perhaps more receptive than I might have been, on account of prior
reception? I do not, cannot know; perhaps I was, but that, like so many
questions in this opera, is really one for a psychoanalyst. But I do not think
I was entirely guilty of finding things that were not there; or, if I was, I
was guilty in the productive spirit in which work, production, and performances
were also guilty. For this, in the well worn clichÈ, was more than the sum of
its parts, ‘intentionally’ or otherwise, so long as one agreed to be one of
those parts. I have not stopped thinking about what I saw and heard; sadly,
many seem never to have started.