There was a great deal to admire in this performance, but I fear that asking
for more than to admire it on the work’s own terms would have been to ask the
impossible. A tale of operetta-ish Jane Austen — or is that of
Jane-Austen-ish operetta? — the libretto unfinished (and set as it was
written by Strauss, out of respect for Hofmannsthal), it is not a work that
makes it easy for one to care about its characters, nor indeed for their
plights, such as they are. Its outings other than in Strauss’s Germanic
heartland, and sometimes even there, veer dangerously close to that dubious
operatic phenomenon: the ‘vehicle’ for a star soprano. Yet Arabella herself
remains a curiously blank canvas on to whom men, and to a certain extent women,
project their fantasies. That is not in itself an unpromising idea, if one can
steer clear of misogyny: after all, one can say the same, up to a point, about
Lulu. But is Strauss’s — or indeed Hofmannsthal’s — heart really in it?
Is this ultimately more than an unsuccessful rehash of certain themes in
Der Rosenkavalier? Again, I remain to be convinced. 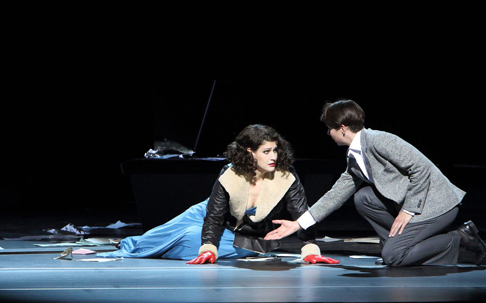 Enough of doubts, anyway, at least for the moment. This was a splendid
performance. The Bavarian State Orchestra was on excellent form throughout,
Strauss’s orchestral sound perfectly captured, with enough clarity and, at
times, irony to guard against the sentimentality that is perhaps more of a
snare in this opera than any of his. (And yes, I include Rosenkavalier
in that.) Philippe Jordan clearly knew the score and communicated its twists
and turns admirably. Waltz and other rhythms were well pointed, phrases taking
their place within a greater whole to highly convincing effect. My only real
misgiving was that very difficult end to the final act. One should certainly
feel the accelerando and its frankly sexual implications, but here, as
so often, the gear change seemed unprepared. It is perhaps only fair to point
out that it is something very few conductors manage to
pull off. (Sawallisch, Keilberth, and Bˆhm spring instantly to mind, but then,
without an encyclopÊdic knowledge of the discography, I am floundering. I seem
to remember Christoph von Dohn·nyi, always a fine Strauss conductor,
convincing here too at Covent Garden; he certainly did in the score as a
whole.) Jordan’s achievements here were real — and greatly appreciated, as
were those of this magnificent orchestra. 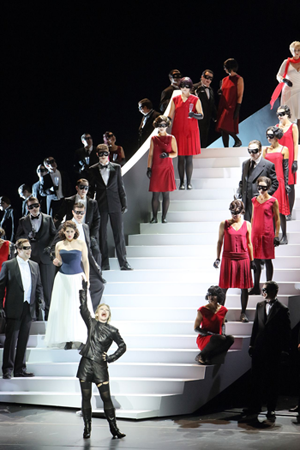 Anja Harteros had been due to sing Arabella in that 2008
performance, but cancelled; this time, she was present, and that made all
the difference. (Her substitute had, sadly, left a great deal to be desired.)
Harteros, like Karita Mattila at Covent Garden in 2004 made the most of the
role, turning Arabella into as convincing a flesh-and-blood woman as one could
imagine, without distorting unduly the frustrating ‘purity’ of the role.
This was a graceful and — in the final scene — sexy portrayal, sung with
consummate ease, beauty, and indeed commitment. One could not have asked for
more. Thomas Johannes Mayer contributed equally to the sexual frisson at the
end. His performance as Mandryka was dark, even on occasion demonic, fully
living up to the high hopes Hofmannsthal seems to have entertained for the
character and — who knows? — might actually have accomplished more fully,
had he lived. Mayer’s
Wagner singing is by now well known; he is clearly an equally fine
Straussian. Hanna-Elisabeth M¸ller’s Zdenka was lively, spirited,
unfailingly well sung: everything one wishes for in such a trouser(-ish) role.
Doris Soffel’s Adelaide provided an object lesson in ‘secondary’
character portrayal, making far more of the compromised mother — not least in
her second-act amorous encounter with Elemer — than one would expect. Kurt
Rydl complemented her perfectly as Waldner: again compromised, but with life
and honour in him when called upon. The couple’s way with Hofmannsthal’s
text was surely second to none. Joseph Kaiser made for an attractive Matteo
indeed, as much vocally as on stage, a plausible possibility for Arabella, had
she been interested. As for the Fiakermilli, surely the most irritating
character, if one can call her that, in all Strauss, Eir Inderhaug did a good
job, without elevating the coloratura quite into something one could simply
enjoy for its own sake, there being little else to detain one’s interest. 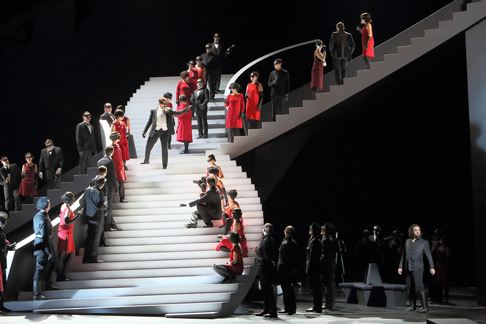 I say that, but director, Andreas Dresen, did what he could. In what is
otherwise a relatively conventional, though that is certainly not to say dull
or unthinking, production, the Fiakermilli’s presentation as an S&M
Mistress of Ceremonies can hardly be missed. Dresen sees her, as a programme
note made clear, as the initiator of the night’s amorous events, ‘the
anarchistic element’, testing the guests’ boundaries. It is an interesting
idea, even if there seems to be a limit to how emphatically the work, at least
as it stands, can support it. Still, it is part of the task of a good
production to present such possibilities and to see where they will lead. In
general, Dresen seems content to draw out the characters — as, indeed, he
would claim to be doing with the Fiakermilli — and that he does with skill,
without turning them into something they cannot really be. Psychological
realism and exploration not unreasonably trump the search for a
Konzept, although I should be curious to know whether a more
challenging staging would deepen appreciation of the work, or simply disrupt
it.Mathias Fischer-Dieskau’s set designs, Sabine Greunig’s
costumes, and Michael Bauer work together to stylish effect indeed: black,
white, and red were the order of the day: the Austrian triband with eagle, I
suppose, although not of course the colours of the Austrian Empire of the day.
I am not sure that the colours necessarily signify anything, though, or even if
they do, that there is further meaning to be discerned. Not unlike the opera,
one might say.