Yes, Tristan is just a shortened title, so we should not
necessarily read anything into the disappearance of Isolde, but, whilst we
clearly value both lovers and both singers portraying those lovers more or less
equally — great Tristans perhaps more so, given their ridiculous rarity —
it struck me as perhaps particularly perverse to have been referring to my
seeing Tristan at the Munich Opera Festival, when, like so many in the
theatre, I had been going especially to hear and, yes, to see Waltraud Meier.
For these two performances in Munich, of which the one I heard was the first,
have been announced as her farewell to the role. ‘Waltrauds Abschied’,
then, I sentimentally called my visit, in dubious Mahlerian homage to a last
performance that was actually to be a penultimate performance. I could, after
all, hardly say I was off to hear Isolde — or maybe I could, even
should, have done. 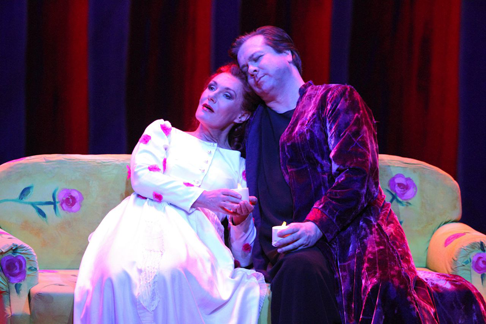 Of course, when I asked, ‘what do we call Tristan und Isolde’,
I was not necessarily just referring to the title. There is no need to frown
upon those calling it an opera; I am sure we have all done so at some point, or
ought to have done so. But, as with all of Wagner’s dramas, it distances
itself from the norms of opera and, perhaps still more so, the opera house. I
am perhaps over fond of deploying this quotation from Boulez, but it so often
seems to hit the nail upon the head. Whilst at work on the Ring at
Bayreuth, Wagner’s great conductor-composer successor observed: ‘Opera
houses are often rather like cafÈs where, if you sit near enough to the
counter, you can hear waiters calling out their orders: “One Carmen!
And one Walk¸re! And one Rigoletto!’ What was needed,
Boulez noted approvingly, ‘was an entirely new musical and theatrical
structure, and it was this that he [Wagner] gradually created’. It might
then, not be entirely wrong to suggest that Wagner’s works deserve shielding
form the opera house, at least as it currently exists. (Let us leave Bayreuth
and its never-ending travails to one side for the moment.) However, by the same
token, Wagner’s Handlung —his own term, ‘action’, a Teuton’s
rendering of ‘drama’, admirably supersedes debates concerning nomenclature
— is surely at home in Munich, if anywhere at all. For ‘Waltrauds
Abschied’, then, and what I calculated must be at least my twentieth
‘live’ Tristan — sorry, I cannot yet bring myself to call it
Isolde — there was something fitting to experiencing it for the
first time in the house in which it had received its premiere, 150 years
previously (10 June 1865).

Moving on a little from what we call Tristan und Isolde, what do we
think it is ‘about’? Wagner was pretty clear, and I have tended to take him
at his word, or at least some of his words. In 1859, summarising the work’s
concerns for Mathilde Wesendonck, he omitted not only King Marke’s
forgiveness, but also Tristan’s agonies at Kareol. True action,
Handlung,had been irreversibly transferred to the noumenal
world: ‘redemption: death, dying, destruction, never more to waken!’ But as
Peter Konwitschny, in a brilliant programme note, argues, quoting Heiner
M¸ller, himself director of a renowned Tristan, ‘Ein Werk ist immer
kl¸ger als sein Autor.’ (‘A work is always cleverer than its author.’)
Such, one might have thought, was a truism, and for many of us it is, although
not for those strange people who seem to think it not only no cleverer but
actually more limited, referring to the tedious mantra of a ‘composer’s
intentions’ , whilst actually having no more interest in them than their most
wild-eyed caricature of so-called Regietheater would. For them, the
questionable taste of a questionable memory of their first exposure to a work
seems to suffice. Handlung? Madame Tussauds, more like. (‘Museum’
would be too generous, given its connotations of learning, culture, and
stewardship.)

Back, however, to Konwitschny. He makes the somewhat startling claim — at
least to me — that Tristan is ‘ein sehr hoffnungsvolles St¸ck’
(‘a very hopeful piece’). As ever, it depends what one means — and it
depends what one means by love, death, and so many other things. But
Konwitschny, arguably taking his cue from the score, from Isoldes
Verkl‰rung, declines to see desolation, although, certainly not taking
his cue from Wagner, he seems to tend more to Liszt’s conception of a
Liebestod. And so, following our heroic couple’s shuffling off their
mortal coils, sombrely dressed in black at the foot of the stage, below the
other Handlung — if indeed that qualifies as such — we return to
the raised level of that other Handlung, and see Marke and Brang‰ne
visiting their graves. Love, ‘whatever that means’ — and we may
understand that as part of Wagner’s ongoing internal battle between Feuerbach
and Schopenhauer — may partly have won out, which sounds pat, but does not
feel so. Perhaps we have experienced Wagner’s Gef¸hlswerdung des
Verstandes (‘emotionalisation of the intellect’). More optimistically
still — and it is surely a useful corrective at least to consider the
non-pessimistic aspects or possibilities of the work — we might consider the
words of Wagner’s fellow radical 48er, Arnold Ruge, writing of an envisaged
religion of freedom, ‘the entire world of humanistic ideals, the entire
Spirit of our times, must enter the crucible of feeling, out of which it must
again come forth as a glowing stream and build a new world.’

Perhaps the most striking thing about Konwitschny’s production, first seen
in 1998, is how it creeps up upon one; indeed, how its owl of Minerva truly
only seems to take flight at dusk. The first act takes place, relatively
conventionally, on a ship, doing pretty much what Wagner asks, and doing it
rather well, although the colourful curtain, presaging aspects of the second
act, has perhaps called into question our preconceptions before we are aware of
their status as preconceptions . The realms of light and day, phenomenon and
noumenon, make their presence felt after the taking of the potion through
Michael Bauer’s excellent lighting: a distinction that continues, greatly to
the enhancement of the drama. One certainly feels the tragedy in Tristan’s
death upon Melot’s sword, but equally, one feels, knows that that is not the
only story. The world of Tristan’s past, played to him on old video reels,
complements what he tells us, without — this is crucial — overpowering it,
as too many overtly psychological, even psychoanalytical readings do.
Tristan is not ultimately about the hero’s childhood; it remains
concerned with metaphysics, in one way or another. And the release provided by
Isolde’s last song is certainly married, not in an easy way but certainly in
a fruitful way, with those final scenic aspects mentioned.

We came, of course, at least most of us did, above all for Meier. It is a
tribute to the performance and production alike that she did not overshadow but
indeed flourished. It would be unduly perverse, though, to overlook her
contribution. Over the years in which she has sung Isolde, she has offered
many, developing virtues, whether related to production, musical performance,
or even the stage of her career. Here, everything seemed in more or less
perfect balance — or, better, fruitful dialectic. Attention to words was
second to none, likewise stage presence. Sustaining of a vocal line, however,
was equally impressive. Suffice it to say, she did not play Isolde; she was
Isolde.

Robert Dean Smith also gave the finest performance I can recall from him,
and not just as Tristan. It was as tireless a performance as I can recall from
anyone, without the disadvantages that often entails of sheer persistence
trumping vocalism. The sheer refulgence of RenÈ Pape’s King Marke had to be
heard to be believed; Markes rarely disappoint, but Pape achieved far more than
not disappointing. Alan Held was a thoughtful, dramatic, even at times
impetuous Kurwenal: all in character, impressive indeed. Michelle Breedt’s
Brang‰ne was just the right foil for Meier’s Isolde; this was a confidant,
beautifully sung, in whom one could — confide. Dean Power’s Young Seaman at
the start was as sensitively sung as any I can recall. Kevin Conners offered a
powerful embodiment of the Shepherd — Konwitschny’s two English horn
players on stage an unforgettable image — and even the Steersman, Christian
Rieger, made a fine impression with his all-too-brief line. Francesco Petrozzi
presented ultimately inconsequential malevolence, as he should, in the role of
Melot.

As Wagner wrote to Eduard Devrient of his ‘most musical score,’
Tristan has, and in performance should have, ‘the most vivid
dramatic allusions totally at one with the dynamic of its musical texture’.
That is asking a great deal of any conductor, orchestra, and cast. (And that is
before we even consider that this is emphatically not a concert work, whatever
dark hopes we might entertain upon seeing an unsatisfactory staging.) Philippe
Jordan presented Wagner far more impressive than I have heard from him before,
whether in Bayreuth or in Paris. The Handlung was as much in the
orchestra as on stage, arguably more so, which is just as it should be. Pacing
rarely, if ever, faltered, and details were presented without overwhelming
(crucial woodwind lines in particular). The splendid Bavarian State Orchestra,
whose praises I have been singing all week, excelled itself here. Dark of tone,
yet clear and transparent where necessary, it was, in the pit that so much of
Tristan und Isolde was truly brought to that life which its director
argued so forcefully was of its essence.

Photos from premiere of production in 1998