This compact opera by Daniel Cat·n is composed to a text by Juan Tovar, that was gleaned from the Nathaniel Hawthorne story as well as a stage adaptation by Mexican Nobel Prize-winning playwright Octavio Paz. Since it is such a complex piece, it is worthwhile paraphrasing the synopsis from the program:
From his room window, Giovanni, a young medical student, observes the beautiful Beatriz in the locked gardens of her father Dr. Rappaccini, a scientist experimenting with poisonous plants. Giovanni ignores the warning of his mentor Professor Baglioni and sneaks into the gardens to meet Beatriz, who has been rendered poisonous to objects and people. They fall in love and eventually Giovanni begins to exhibit the same traits as Beatriz. He is given an antidote by Baglioni, which he and Beatriz agree to take. In the end, however, Beatriz grabs the vial and drinks the antidote alone, which proves to be fatal to the heroine. She dies at Rappaccini and Giovanni’s feet.
Is there any doubt that there is operatic potential in this premise? To a large degree, the creators and production team have realized substantial musical and dramatic achievements. The piece as originally conceived was a two act opera and premiered as such. Wisely, this fragile tale was subsequently pared back to one 75-minute act, and Mr. Tovar’s lean book provides a perfect springboard for Mr. Cat·n’s inspired musical palette.
If Stravinsky had set out to create an Impressionistic opera score, perhaps by way of Ginastera, it would not be unlike whole stretches of this score. A very effective reduced orchestration (by the composer) features two pianos, two players deploying massive banks of percussion instruments, and harp. All were exceptional, with pride of place being accorded to the superlative (uncredited) harpist. Conductor Dean Williamson led a sensitive, propulsive reading with admirable attention to details.
The first forty minutes or so feature excellent text setting and animated, highly-charged exchanges of dialogue, with pauses for moments of solo introspection. The rippling harp, the piano scoring (by turns churning and stinging,) the incisive percussive accents, all created a unique aural world, a mesmerizing atmosphere for this creepy environment. That said, by the time Giovanni finally burst into a melismatic arioso, I was all the happier for a “tune” after so much mood painting “effect.” The amplification of singers and “pit” was well handled and subtle enough, although I wish the sound of the voices had been coming from the front and not the sides. 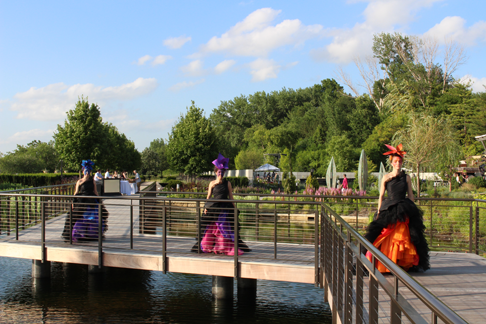 A Scene from Rappaccini’s Daughter
Adam Crinson’s set design was on the whole very effective, with a tiered structure strategically placed in the gardens like a Latin Gothic retabla, implying a collage of omens and misfortunes. Giovanni’s room is on the second level, accessed by a staircase stage left and a ladder stage right. Beneath this platform is a colonnade of supports creating a focused pathway for ominous, extended entrances. The structure is fronted by a raked, astro-turfed platform with a tree dead center. A love seat is on the ground, center, and (I think) a table and/or chairs are on the ground stage right.
I say “I think,” because actors would disappear from view there (except to the first row) since the audience was seated on the flat ground (not raked). Director Octavio Cardenas was successful overall in creating this special world, but he and Mr. Crinson inflicted more than a few sightline problems on the proceedings.
The stage center tree was tall enough to block any performer on the top level if they lay on the bed or knelt on the floor behind it, which happened with alarming frequency. The exposition between Giovanni and Baglioni took place out of sight as they sat (knelt?) on ground level, at the very moment the Surtitles decided to misfire (in what was a sporadic evening for those projections). At the moment of Beatriz’s death, she is not “at the feet” of Giovanni and Rappaccini, but rather standing profile in front of the tree, and I could not see Giovanni or Rappacini’s reactions. Also, I did not wholly understand the significance of the bits of costume pieces that were picked off Beatriz as she stood there “dying.” It didn’t read to me.
These are easily remedied shortcomings in what was otherwise an engaging evening. Connie Petersen and Anita Yavich’s costumes were simply magical. In a lovely stroke, Mr. Cardenas added three extras to the cast, mute “trees” that were lithe women evocatively attired in stylized tree “dresses,” complete with wildly creative make-up and wigs by Brittany Crinson (for Elsen and Associates). The trio of Flower Voices may have owed more musically to Wagner’s Blumenm‰dchen, but their fanciful look leaned a bit more to Little Shop of Horrors.
The director made masterful use of the “trees” and the “flowers” to create varied, meaningful and artistic stage pictures. Given the limited resources available with temporary light towers, Nate Wheatley designed pleasing lighting effects, and managed a good even wash in spite of the prevalence of side lighting. The twinkle lights in the tree (which fade to black as Beatriz dies) contributed a simple, telling effect. Director and designers also took good advantage of the natural staircases and paths of the Botanical Gardens and did a good job integrating the performance into the environment (and vice versa).
Best of all, DMMO has assembled a cast of top tier vocalists to introduce this rarity to Festival-goers. As the ill-fated daughter of the title, Zulimar LÛpez-Hern·ndez offered radiant singing as Beatriz. Ms. LÛpez-Hern·ndez is possessed of a lustrous soprano, with a rich middle register and a capability of glinting thrust in the role’s higher reaches. While she can also float effortless pianissimi, her exciting delivery is just on the verge of spinto territory. She is an artist to watch.
The role of Giovanni is the evening’s biggest “sing,” as he never leaves the stage. Happily, young Mackenzie Whitney made a strong case for the infatuated lad with his pliable, impassioned tenor. Throughout the evening, Mr. Whitney revealed fine variety in his declamations, be they defiant, entranced, romantic or delusional, and his handsome figure lent credence to the story. His top voice was happiest at mezzo forte where he caressed some key phrases with creamy tone. When the volume called for a bit more heft, Mackenzie (only) occasionally lost the spin and settled for a straighter toned solution. Still, his was a commanding role assumption.
David Adam Moore subdued his strapping demeanor to create a sinuous, threatening presence as Dr. Rappaccini, the quintessential mad scientist. In his characterful long coat and shoulder length wig, he seemed to be channeling Johnny Depp. Belying the menace of his character, Mr. Moore sang with a gorgeous, warm, even baritone, that perhaps could have incorporated a bit more snarl. As Baglioni, Steven Sanders’ securely sung Baglioni was a decidedly effective contrast to the lyrical Giovanni. Mr. Sanders’ Wagner-Lite delivery showed off a meaty tenor that was at once superbly controlled, unctuous, and officious. In the smaller enigmatic role of Isabela, Melisa Bonetti commanded a wonderful presence in the lower middle voice but also easily soared heavenward with a well-schooled top.
As the Flower Voices, Apprentice Artists Rachel Blaustein, Kristen Dininno, and Emma Sorenson were uniformly fine. In one of the score’s best ensembles, the three combined with Giovanni to luxuriate in an extended passage of layering phrases and the quartet wove an effect that was alluring, haunting and inevitable. What a shame that this splendid cast has only two performances. As successful as was this premiere, I can only imagine how much richer the experience would become as the performers really get comfortable with this complex score, become effortlessly fluent in its vocabulary, and discover even more specificity in these rich characters.
This was undeniably a commendable first night, a brave choice, and a persuasive rendition. It was a joy for this opera-goer to discover a “new” work, especially as so conscientiously performed in such a gorgeous botanical garden. I hope DMMO can find other opportunities to use this setting that is so conducive to spending a perfect summer evening.
James Sohre