Svadba means marriage in Serbian, a slavic language. There are apparently marriage customs that straddle slavic cultures, one of which is the preparation of the bride’s hair for the marriage day, like Konstantin Makovsky’s enormous The Russian Bride’s Attire (1889) that hangs in San Francisco’s Palace of the Legion of Honor.†This is simply that.
The opera Svadba follows in the footsteps of the famed Bulgarian State Television Female Vocal Choir so evidently there is a tradition of women’s songs and singing that is strangely absent from Western European and American high art.
That Svadba is an opera is a question in itself. It may be more of a painting as there is little if any dramatic development. Mainly there is exposition of subject, like your eye following the story told in the fixed images — a painting. There is of course much physical motion, thanks to the fine efforts of two U.S. trained artists, stage director Ted Huffman and choreographer Zack Windkur who set abstract movement for each of the seven moments of this female version of what in the U.S. is an all male stag party. 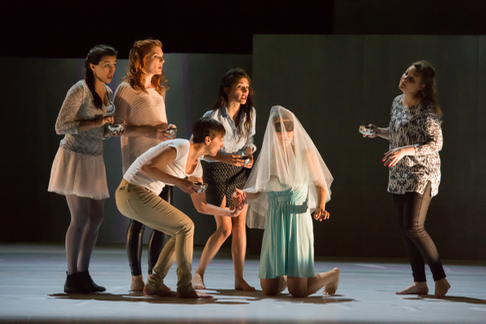 The six singers of Svadba
Photo copyright Bernard Coutant
Like immersing yourself in a painting the subject matter of Svadba is of less importance than the delight you find in the way its story is told. Composer Ana Sokolovic created these seven moments with the six female voices, but they are not always a cappella. There were strategic dings of a bell, an electronic tape or maybe a synthesizer, plus noises the six singers created with the few props as well as stomping, clapping and tongue clicking.
The sound world was enormous using the tones of trained voices that mostly moved in soundscapes of close intervals, though of course there was much rhythmic invention of syllables that were both nonsense and Serbian. To our Western ears the formulated voice sounds were all abstract (the sounds were so involving that we ignored the sparse supertitles). When there were melodic moments they were in the modal scales of slavic folk music, and this alone created a long ago and far away atmosphere.
There were two strategic and quite beautiful moments when the voices collided on the first inversion of a triad chord, and the grandiose final moment when the voices resolutely landed on a perfect fifth! It was good music.
The subject matter is essentially slavic folklore though its relevance surely has long disappeared. The metteurs en scËne, perhaps the composer as well chose to update the imagery to contemporary dress and action. I found this disconcerting given the specifically dated subject matter. Or maybe there currently are some strange customs among Serbian women who live in Canada.
The six singers were superb musicians with beautiful voices. These 55 minutes were splendid indeed.
Our evening continued across town at the recital hall of Aix’s Darius Milhaud Conservatory of Music, part of Aix’s magnificent performing arts campus. Unlike the ill conceived auditorium of the next door Grand ThÈ‚tre de Provence (it is round), this recital hall is appropriately shaped (oblong) and has a very fine, live acoustic. 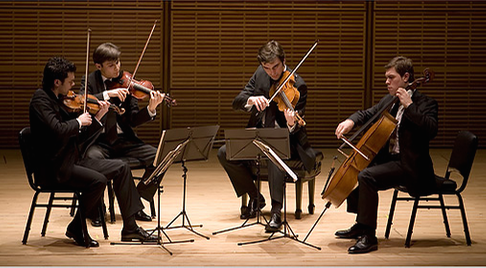 The Modigliani Quartet
The Modigliani Quartet performed Beethoven’s 4th string quartet (Op. 18), Ravel’s famed Quartet in F Major, and relevant to the evening’s slavic focus, the Hungarian Ernˆ Dohn·nyi’s 1926 third quartet (Op. 33). What this fine quartet has to do with Modigliani, if anything, is an open question. There is no question however that it is a quartet with attitude. Each of the three works were ambitiously attacked to the degree that you feared it was not humanly possible to keep up such volume, speed and intensity for the extended duration of four movements. It was.
Like the six women of Svadba the four men of the quartet moved in soundscapes, achieving a sweeping lyricism that ignored the musical structures of the printed page, frustrating however some listeners with this lack of apparent structure. The unique sound of this quartet is symphonic, the four instruments precisely matched in a very wooden tonal color (the instruments are not credited in the program). The unison breathing of the four men was made very apparent either through the transparent acoustic of the room or the aural concentration the quartet motivated in the listener. It was big playing by four young virtuosos.
The Dohn·nyi is an edgy and anxious piece, the second movement alternating huge, nervous variations on a chorale theme with quiet (here played pianissimo) moments. The final moments of the last movement well echoed the extreme excitement of the intense Svadba scenes before it roared in tonal edginess to a horserace finish. It is big music, good music.
There was a time when the Aix Festival was at odds with its host city, Aix-en-Provence. Under the stewardship of StÈphane Lissner (1998-2006) the festival floundered artistically though Lissner did succeed in developing a close and cooperative relationship with the citizens of Aix. The festival has indeed regained its artistic footings with the current leadership of Bernard Foccroulle and importantly it has not lost the willing cooperation of the Aix citizenry so ably gained by Mr. Lissner.
To the degree that just now the citizenry of Aix starred in Jonathan Dove’s Monster of the Labyrinth, rendered in French as Le Monstre du labyrinthe. Like Svadba Dove’s Monster is really a concert piece, but unlike the extreme technical demands of Svadba Dove’s Monster was intended to be performed by a community chorus challenged only by the minimal musical demands if not by its considerable length.
Scores, maybe hundreds of Aixoises — men, women and children — had learned the whole thing (a considerable amount of music) by heart, obviously devoting considerable time to rehearse their moves around the Grand ThÈ‚tre de Provence.
Monster had its world premiere on June 20 at the Berlin Philharmonic in Berlin, performed next by the London Symphony in London on July 5 (yes, you get it — conducted everywhere by Simon Rattle), and at the Aix Festival on July 8 and 9 again with the London Symphony, though in all cities the orchestras included student, community or semi-professional players.
The music is primarily brass fanfare and huge choruses in a series of scenes that take the youth of Athens to Minos to be consumed by the Minotaur, only to be saved by the young Theseus. It is a piece for amateur performers, their communities and their families, not an work to be savored by opera aficionados and dissected by critics. 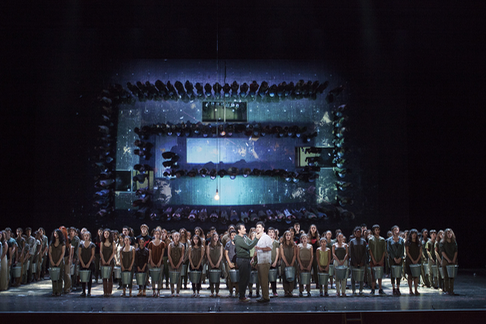 The projected maze, staging by Marie-Eve Signeyrole
Photo copyright Vincent Beaume
Of critical interest in Aix however was the staging by Marie-Eve Signeyrole who last winter gave us an excellent Eugene Onegin in Montpellier. Mlle. Signeyrole’s signature technique is the inclusion filmic action, meaning that she uses an enormous cinema screen as backdrop on which she projects what is happening on stage from various perspectives, and most dazzling from above. Note that this worked perfectly for creating Dedale’s maze. Not only memetic of the stage actions the projections include original material, like the Theseus Minotaur battle enacted by two hugely enlarged, i.e. digitally amplified origami puppets.
The staging was of consummate charm, the masses of choristers moving graciously through the minimal stage elements and finally throughout the auditorium. Upon entering the auditorium we had been given a piece of paper. After the minotaur had been eliminated there was a full stop of everything and the was stage emptied. We were now instructed by 6 year-old boy (alone on the vast stage) how to turn the piece of paper into an origami ship so we could all get back to Athens.
The final celebratory chorus was sung by the choristers surrounding us in the auditorium, Sir Simon Rattle having turned to conduct the dispersed chorister and all of us in a final anthem while we (all of us) proudly held our ships on high.
Oh my.
Michael Milenski