It may not have the crackling tension of Tosca, the profound sacrifice of Butterfly, the appealing chinoiserie of Turandot, or the memorable tunes of La Boheme. But taken on its own colorful, often boisterous terms, Fanciulla can touch and delight.
The collaborators at Des Moines Metro Opera have obviously and lovingly believed in every measure of this work, and have mounted a winning new production that is nigh unto perfection.
At its center, its beating heart is the tremendous performance of Minnie by Alexandra LoBianco. The soprano not only has an exciting spinto voice, but she is able to weight each phrase with just the right dramatic intent. Upon her first appearance, I worried that her diminutive stature might hamper her effectiveness in carrying the show. My fears were unfounded.
Ms. LoBianco’s voice conveys all the stature a great Minnie requires: a creamy instrument that oozes charm and allure, a rock solid technique that is even from top to bottom, and an unerring theatrical savvy that can color dramatic utterances with conviction and yes, deeply felt emotion. I found myself tearing up in her penultimate scene as she begs her beloved “boys” for Dick Johnson’s life. Her connection to each of them was so meaningful, her singing so throbbing with urgency that I was quite undone. This was a true star turn from an artist at the top of her game.
Every inch her match, Jonathan Burton poured out impassioned, emotionally generous phrases as Dick Johnson (Ramerrez). Mr. Burton has an exciting squillo in his full-bodied tenor that is riveting. But Mr. Burton can also exude a persuasive charm as he croons gentler phrases and caresses them with a knowing legato. The pairing of these two artists was a cause for jubilation and their interaction created a musical frisson that was impossible to resist. 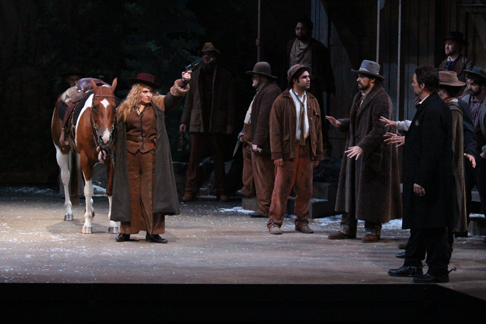 Strapping, handsome Kristopher Irmiter was a powerful and incisive Jack Rance. The celebrated Poker Scene found him in total control of a full palette of vocal effects and conflicted, turbulent emotions. Mr. Irmiter’s imposing baritone is dark and commanding, and his Rance was virile and compelling.
The huge cast of (almost exclusively) male singers is so uniformly excellent that it is hard to single anyone out. That said, Steven Sanders was a solid, clarion-voiced Nick. Christopher Job’s substantial baritone was deployed in fine service to Ashby’s characterization. I thought that Joshua Jeremiah’s individualized, slightly grainy baritone was completely winning as a memorable Sonora. Lanky Tyler Alessi contributed a solidly sung Beppo. And Andrew Potter proved to be a sensitive, appealing Larkens.
Director David Gately has created a vibrant staging that was not only grounded in truthful, meaningful relationships, but also filled the stage with well-motivated, seemingly spontaneous movement. I totally bought into Mr. Gately’s vision of this specific theatrical world, and admired his choices without reservation.
He was greatly assisted by his gifted design team. R. Keith Brumley has contributed a marvel of a realistic set, one that provoked much positive intermission chatter. From the folksiness of the expansive saloon that spilled onto the thrust area, to the isolation of Minnie’s contained cabin, to the tightly focused tableaus of the final act, Mr. Brumley provided an attractive environment unerring in its practicality and atmosphere.
The homey costumes provided by Utah Opera were all exactly the right “look” and greatly enhanced the actors’ efforts in creating realistic characters. And Barry Steele’s detailed lighting design added immeasurably to the effectiveness of the drama. His subtle gradations of area effects and color choices in general washes were masterful in their effect.
Conductor David Neely elicited a spirited reading from the orchestra, who seemed to revel in one of Puccini’s most diverse and luxuriant orchestrations. The attention to detail from the solo wind instrumentalists was complemented by richly satisfying playing from the banks of strings. The instrumentalists went from strength to strength and the overall arc that Maestro Neely was able to effect was as powerful as it was inevitable.
If you didn’t feel the hair rise on the back of your neck, or feel a chill down your spine at least once during this superbly realized performance, you were clearly at the wrong address. This Fanciulla was the operatic art form at its most persuasive.
James Sohre