In the title role, Sara Gartland is serving notice with a star-making performance of the first magnitude. Ms. Gartland not only has an incisive thrust to her robust, soprano, but also she has a charismatic and persuasive dramatic delivery that commands our attention. There is no requirement of this demanding role that eludes her artistic fulfillment. She is able to first suggest an irresponsible, even cruel girlishness with ease, encompass the sufferings of a young mother betrayed in love, and ultimately assume a tragic stature worthy of a classic Greek heroine.
On the way, the soprano displays a full arsenal of effects. Her assured technique allows her to sing evenly throughout the range. Her unerring phrasing and sense of musical line is colored with underlying dramatic intent and infused with subtext. She exhibits meticulous control of even the softest, tenderest phrases, and then turns around on a dime to ravish our ears and stir our souls with throbbing forte exclamations riding easily over the full orchestra, that are laden with heartbreaking intent. Her great Act II prayer scene was a study in variety and total immersion in the musico-dramatic effect. And Sara was in fine company.
Brenda Harris proved a force of nature as a stoic, inscrutable Kostelni?ka Buryjovka. Ms. Harris has a searing, laser-intense soprano that it is a perfect match for the unmovable stepmother. Yet when the character has to make life-altering decisions, she is able to modulate her delivery to color her voice, embody anguished deliberation, and finally, the mortification of guilt. This was a consistent characterization that first hung onto sanity with fingertips of steel (and high notes to match), then descended into unutterable tragedy as she unwound before our eyes, bringing a touching vulnerability to her vocalism. Ms. Harris and Ms. Gartland may be the two anchors that grounded this performance, but there is glory to be shared. 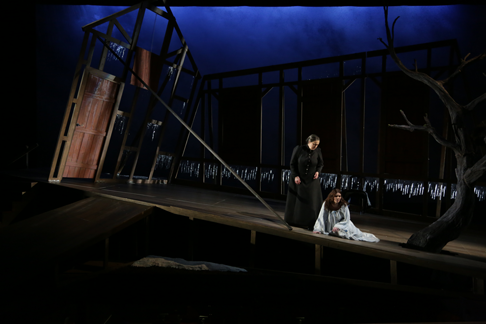 Brenda Harris as Kostelni?ka Buryjovka and Sara Gartland as Jen?fa, her stepdaughter
As the feckless äteva Buryja, Joseph Dennis brought such a fresh, gleaming tenor to the part that it almost belied his status as the town wastrel. But Mr. Dennis, boyish and gangly in his brush cut, suggested the philandering ne’er-do-well with ease all the while exuding a naughty charm that made the plot believable. In the great Act Two scene where the weakling rejects Jen?fa for good, it is to his great credit (and affecting singing) that we at once despise him and pity him.
Richard Cox proved to be a coiled spring of a hot-headed Laca Kleme?. His focused, intense tenor was so powerful upon first utterance that I thought he may have been amplified. His is an impressive, substantial tenor, rock solid in its delivery but malleable in its deployment. Mr. Cox devised a characterization that was first quite terrifying in its volubility, then devolved into almost a Baby Huey like vulnerability that was enormously persuasive. Never before have I felt so completely that he is a changed man, and one that Jen?fa could love. A towering achievement.
If there is a more treasurable artist than Joyce Castle, I am not sure who it is. Her portrayal of Grandmother Buryjovka is another master’s class in how to be a totally involved performer. Ms. Castle has created a total vocal and dramatic portrayal that is highly personal and richly detailed. Her plummy voice not only has great presence, but even in long stretches on stage when she is not singing, she is also always ‘in the moment.’ Her presence enriches every scene she is in.
Kristopher Irmiter’s imposing baritone made for an impressive Mayor; as the Mayor’s Wife, Mary Creswell sang with assurance and potent comic timing. Shannon Prickett made the most of her stage time, bringing a fresh voice and dramatic spunk to the spoiled daughter Karolka. Brittany FouchÈ was enchanting and sang winningly in the trouser role of Jano.
Director Kristine McIntyre exerted a sure hand over the proceedings, and the unique thrust stage space with its (almost) bisecting pit did not hamper her development of character relationships or crowd control. In fact, it seemed to liberate her, and she filled the stage with crackling confrontations, mournful soliloquies, and delightful motion. In the party scenes, she was ably abetted by choreographer Kyle Lang who devised lively folk-like dances that were as varied as they were cleanly executed.
R. Keith Brumley’s austere set design provided a perfect environment for the piece. Mr. Brumley crafted a series of intersecting, overlapping tiered platforms that spilled off staged and surrounded the pit, constructed of rude, weathered planks. It aptly suggested the simple, rustic life, all the while giving the director an enviable number of levels, an opportunity that Ms. McIntyre capitalized on handsomely. The large spinning mill wheel that was upstage for Act One, gave way to a skeletal structure of a farmhouse in Act Two, and produced a coup de theatre in Act Three as the walls came crashing down as Kostelni?ka’s deception falls prey to the truth.
The costumes were obtained form Utah opera and coordinated by Connie Peterson. They were perfection. The homely street wear was complemented by colorful folk costumes that lent authenticity and a momentary respite of joy. Barry Steele’s lighting design was another asset, and he partnered commendably by indulging the director’s isolation of characters and moments, with well-considered and -cued area effects. The suggestion of exterior light coming through windows as they are opened, the coolness of the chilly night, the glow of warmth from of the heroine’s recovery room, the cheer of the celebratory scene in Act One, all were beautifully enhanced by Mr. Steele’s plot.
In the pit, Music Director David Neely showed an assured hand, and the musicians responded with a glowing, committed rendition. The solo work by the concertmaster was commendable, and the percussive effects of the xylophone and tympani were effectively penetrating. Lisa Hasson’s chorus was well tutored and sang with elan and balance. The entire musical effect was stirring and heart-rending.
If I could have one wish, it might be for just a little more raw drive from the pit. The impact of the evening was significant, but I wonder if a hint of edginess might take it even higher.
James Sohre