A far cry from Christopher Alden’s controversial 2012 Midsummer Night’s Dream at the ENO where 0beron is the headmaster of a boys school and Theseus is his former lover, Robert Carsen’s 1991 production of Le Songe d’une nuit d’ÈtÈ for the Aix Festival floats high above the sexual and social complexities of Shakespeare’s raciest play.
The Carsen production however has become a classic because of the simplicity of its exposition, the intellectual innocence of its concept and the maximal minimalism of its execution. Thus twenty-five years later the Aix Festival has brought this splendid production back to its theater of origin, the ArchevÍchÈ in a co-production with the OpÈra de Lyon where it was staged in 2008.
The excellent Orchestre of the OpÈra de Lyon was in the ArchevÍchÈ pit with its music director Kazushi Ono to illuminate this complex 1960 Britten score, sculpting its lovers, whispering the mysteries of its fairy world, and teasing its rustic actors and opera itself. As often in Britten human actions are played out in an atmosphere of innocence, created just now in Aix by 20 boys from London’s Trinity Boys Choir.
Director Robert Carsen has often collaborated with designer Michael Levine (notably for Boito’s Mefistofele, another Carsen production that has achieved classic stature). The Midsummer Nights Dream exploits a favorite Robert Carsen texture — cloth. The entire stage is a bed complete with huge pillows covered with a brilliant saturated green coverlet. The night sky is another huge mass of saturated color — blue. 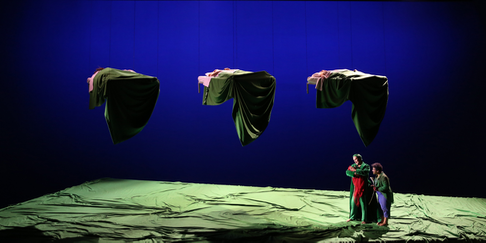 Two pairs of lovers in beds, Tytania and Bottom in far right bed, Lawrence Zazzo as Oberon, Miltos Yerolemou as Puck
Photo copyright Patrick Berger courtesy of the Aix Festival
The fairies are dressed in identical blue and green suits, their hands covered in brilliant red gloves, a color that betrays the hidden and maybe dangerous mysterious of the fairy world. The coup de thÈ‚tre is when the fairy world instantly vanishes (whooshed into the lofts by cables) and the blank golden lighted stage has become Athens. No hidden digital magic, just overt mechanical human ingenuity — and it is sublime theater.
Nothing could be simpler, and that is the Carsen brilliance. Here this simplicity transforms the absurdities of Shakespeare’s 17th century world into the absolute normal for Britten’s premonition of the psychedelic ’60’s, no questions asked. It is a distilled theatrical language that was new to the operatic stage in the ‘90‘s. It has withstood the test of time, and for this Midsummer Night’s Dream it once again it effectively stripped away layers of insignificant complications to reveal an unusual innocence in the complicated artistic soul of Benjamin Britten.
The Aix Festival provided a splendid cast led by the green wigged Oberon of American counter tenor Lawrence Zazzo who boasts a male colored alto voice that he used to musical perfection. Tytania was sung by French soprano Sandrine Plau in a shimmering and smooth high voice that made her magical. Bottom was sung by British bass Brindley Sherratt with welcomed authority and wit. Central to the success of this edition of the Carsen production was the Puck played by well known actor Miltos Yerolemou (Star Wars VII – the Force Awakens, Game of Thrones, Wolf Hall) whose 5’3” height left him in the world of boys but whose forty-some years added what seemed to be innocent depravity.
One has come to expect excellent casts at the Aix Festival, and this expectation was upheld throughout the huge cast.
A Peter Sellars production is expected to be off-the-wall, as was his ZaÔde (2010) at the Aix Festival (a remount of the 2006 Lincoln Center production) where a huge sheet metal wall was pounded on throughout the performance. Just now the maximally gifted, perpetual adolescent (he is 57 years old) has remounted his 2012 stagings for Madrid’s Teatro Real of Stravinsky’s Persephone and Tchaikovsky’s Iolanta. Once again it is all about walls, this time though they are full stage flat backdrops that rise and fall throughout the two brief operas, lighted in various hues and intensities.
Usually Mr. Sellars collaborates with off-beat (though firmly in the publicly-supported-art mainstream), culturally diverse designers (like for Perm Opera’s [and ENO’s] recent Indian Queen). But for this production Sellars’ set designer was George Tsypin, an designer fully vetted by virtually every mainstream stage director who toys with advanced theatrical ideas.
We entered the Grand ThÈ‚tre de Provence to an a vista set — a few black door frames construed center stage topped by primitive bird heads. We left more than three hours later and it was still sitting there, only by then all of the usual maskings that created the stage picture had disappeared revealing the fully open stage space, Mr. Sellars and Mr. Tsypin stubbornly reveling in this hackneyed image. 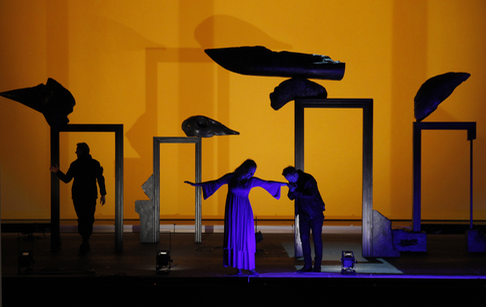 Maxim Aniskin as Robert, Ekaterina Scherbachenko as Iolanta, Arnold Rutkowski as VaudÈmont
Photo by Pascal Victor courtesy of the Aix Festival
Mr. Sellars has long held a fascination for Oriental theater forms thus the black covered stagehands of Noh theater were transformed into concert-black dressed choristers who assisted in the storytelling in both operas, construing themselves in geometric shapes from time to time on the stage to sing while they made the uniform, formalized arm motions typical of the abstractions of Asian theater.
Like ZaÔde, neither Persephone nor Iolanta are masterpieces, all the better for Mr. Sellars theatrical explorations, here light and dark. In Iolanta it was transcending blindness into sight, in Persephone it was the light of earthly life to the darkness of hell, and back again and back again.
Iolanta, Tchaikovsky’s last opera, is more in the music theater genre than it is opera, its simple story (blind girl regains sight) told in a series of songs and a couple of duets that forlornly replay the great Tchaikovsky moments. Mr. Sellars mostly kept his actors standing in the doorways and relegated his romantic leads to mostly lying still on the floor when not rolling on the floor. 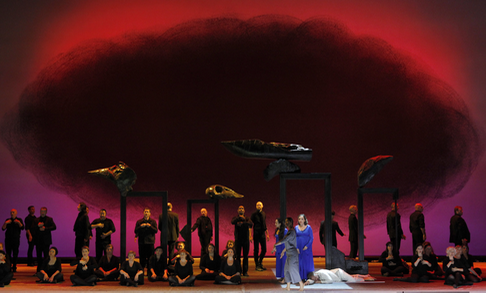 Dominique Blanc (in blue) as Persephone, Paul Groves (lying) as Eumolpe, dancers left of principals, plus chorus
Photo by Pascal Victor courtesy of the Aix Festival
Persephone (1933) comes from Stravinsky’s neo-classic period where much use is made of formalized tableau. It is circus-like theater of catatonic rhythmic repetition according to Stravinsky contemporary Theodor Adorno (a philosopher and aficionado of Schˆneberg). Considering Persephone from this point of view it becomes a perfect vehicle for Mr. Sellars’ theatrical genius.
When not done as a concert performance Persephone is danced, a sort of pantomime. Mr. Sellars used four Cambodian dancers who naively imitated AndrÈ Gide’s narrated and sung poem. One recalled the two Cambodian dancers who wandered aimlessly around the stage for the duration of his 1997 Salzburg staging of Le Grand Macabre.
Russian conductor Teodor Currentzis did not conduct the performance I attended due to illness. It was ably conducted by his assistant, and maybe it was this inexperience that hindered any sense of musical sweep to the evening. Mo. Currentzis is director of the Perm (Russia) Opera (about 800 miles east of Moscow) and is now a frequent collaborator with Mr. Sellars.
The strong voiced, Russian speaking cast for Iolanta sang loudly in fine Russian un-nuanced voices and style. The lone foreigner was American bass Willard White who was the tale’s elegantly voiced Muslim doctor. American tenor Paul Groves was splendid as the Eumolpus, priest of the Eleusinian Mysteries (Persephone abducted into Hades by Pluto). The musical highpoint of the evening was the lovely Tchaikovsky a cappella prayer sung by the chorus of the OpÈra de Lyon. It is very rare to hear a 48-voice choir of trained operatic voices singing beautiful, soft music. Simply stunning.
The 2010 Aix audience had no patience for Sellars’ ZaÔde. The 2015 audience greatly appreciated this boring double bill. Maybe you had to be French.
Michael Milenski