Captions
indicated the singer’s name and aria title; images were projected onto the
backdrop to set the ‘context’; rudimentary lighting weakly strove to
establish mood. There were no surtitles. What was there to distinguish
proceedings from one of Simon Cowell’s TV talent shows? Watching this
conveyor belt of vocalists, I wondered why a young singer would put his or
herself through a sort of operatic cattle-show which offered little chance to
show one’s range and diversity or to achieve any ‘meaningful’
communication with the audience.

But, as Operalia’s founder Pl·cido Domingo remarks, even for the most
gifted the world of professional opera is complex and challenging, and
sometimes ‘very distressing to the point that sometimes a remarkable talent
can pass by unnoticed’. Operalia was established in 1993 ‘to discover and
help launch the careers of the best young opera singers’ — singers ranging
from 18 to 32 years of age, of all voice tessituras and from every country in
the world. And, it seems to be fulfilling its ambition to give vocal talent a
leg-up, with singers such as Nina Stemme, Joyce DiDonato, Rolando VillazÛn,
Erwin Schrott Brian Asawa, JosÈ Cura, Joseph Calleja, Ailyn Perez, Olga
Peretyatko and Sonya Yoncheva coming to prominence at the competition in the
early stages of their careers. Moreover, if the superficiality of this vocal
parade was somewhat unedifying, then there was at least some compensation in
that, having reached this final stage of the competition, all were in a sense
winners — and that the contracts will not necessarily go to the official
award recipients but to those who make an impression on, not only jury members
such as Anthony Freud (General Director of the Lyric Opera of Chicago),
Jonathan Friend (Artistic Administrator at the Metropolitan Opera), Joan
Matabosch (Artistic Director at the Teatro Real in Madrid) and Jean-Louis
Grinda (Director at the OpÈra de Monte-Carlo), but also on other scouting
impresarios and record producers. 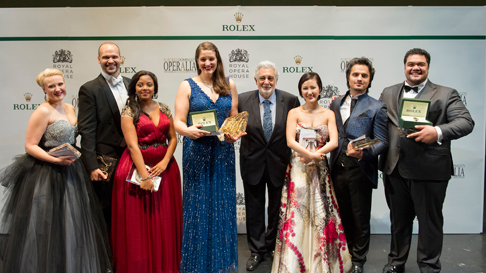 Placido Domingo with the winners of Operalia 2015

Previously held in various cities around the globe, the Operalia Finals
reached London for the first time this year. After three days of preliminary
rounds involving 40 contestants drawn from 21 countries, the 11 finalists
gathered at the Royal Opera House for the concluding round. Each participant
sings one aria, accompanied by the Orchestra of the Royal Opera House conducted
by Domingo (the event was live-streamed by Medici TV). Born in Madrid to
parents who were stars of the zarzuela, Domingo has also established a Zarzuela
competition in honour of his parents and to encourage singers to work in this
art form; 5 of the 11 singers also presented an aria in the Zarzuela
competition.

Much clearly depends on the soloist’s choice of aria; somewhat
disappointingly, but not surprisingly, all bar one of the singers selected from
the French and Italian nineteenth-century repertoire. The exception chose
Wagner.

And aria-choices did prove influential. The two First Prizes, for Best Male
and Best Female Singer, went to Romanian tenor Ioan Hotea and Norwegian soprano
Lise Davidsen. Davidsen had to wait until the end of the roll call to perform
‘Dich teure Halle’ from Tannh‰user but this clearly had no effect
on her nerves, and she thrilled with a towering performance of majestic power
and penetration. Her plush sound was pin-point accurate and her technical
assurance unwavering, though it was rather a stand-and-deliver performance.
Davidsen has made a habit of winning prizes of late, including the LÈonie
Sonning Music Prize, Danish Singers Award 2014 and the Kristin Flagstad Award
2015. She was also, just a couple of weeks ago, a triple winner at the 2015
Hans Gabor Belvedere Singing Competition in Amsterdam, where she picked up
Second Prize as well as the Prize of the International Media and the Audience
Prize. On this occasion, she also won the Audience Prize (a Rolex watch —
courtesy of the sponsors) and the Birgit Nilsson Prize) for performances in
German repertoire by Richard Strauss and Richard Wagner).

Hotea’s ‘Ah mes amis’ from La Fille du regiment confirmed
both his courage and his ability to firmly nail the nine top-Cs. In
Donizetti’s showpiece and in the Zarzuela competition — where his
performance of Seranno’s ‘La roca fria del calvario’ from La Dolorosa
won him his second First Prize of the evening — Hotea also used his
bright shining tenor to engage the audience and convey role and situation,
something which both of the American baritones participating, Edward Parks (who had the tough job of opening the competition and was awarded Third Prize) and Tobias Greenhalgh found more challenging in ‘Largo al factotum’ (Rossini, Il barbiere di Siviglia). New Zealand tenor Darren Pene Pati
made a big impact with his honey-toned rendition of ‘Tombe degli avi miei’
from Lucia di Lammermoor: with his endearing, relaxed voice and
engaging manner, Pene Pati was the foreseeable and worthy recipient of the
Audience Prize for Best Male Singer.

The remaining male participants, French tenor Julien Behr — who sang
Gounod’s ‘Salut! Demeure chaste et pure’ from Faust with charm
but without strong impact — and South-African bass-baritone Bongani Justice
Kubheka — who struggled with some of the upper notes in ‘La calumnia’
(Il barbiere) and occasionally lost his grip on the orchestral
safety-reins (though Domingo was not particularly helpful to his singers) —
did not quite have the necessary technical arsenal at their disposal.

In ‘Il dolce suono’ from Donizetti’s Lucia Korean Hyesang
Park revealed a sparkling soprano more than capable of scaling the coloratura
heights; she worked hard to establish character too, though I found her posing
and gesturing rather mannered — particularly so in the zarzuela ‘No sÈ que
siento aqui’ (Fern·ndez Caballero, Ch‚teau Margaux). Hyesang Park
carried off both Second Prize and the Zarzuela prize, but I could not
understand why she was permitted to perform the whole of Donizetti’s mad
scene, cabaletta and all, which at 20 minutes or so gave her a platform equal
to that of all four preceding participants combined, and thus the opportunity
to show her vocal diversity. If there is no rule on the length of aria, then
perhaps there should be.