Beginning in 2011 with
‘reflections on’, ‘homages to’, and ‘meditations with’ J.S. Bach, the festival has subsequently explored the work of
Purcell and Rameau, among others, and in June this year turned its attention to the Scarlatti père and frère.

In 2012, it was Monteverdi with whom contemporary musicians, scholars and dancers conversed. And, it was concerts and concepts from that 2012 programme
(including ‘Monteverdi to Tango’, ‘Orpheus Goes Postmodern’ and ‘On the Limits of Tonality: Monteverdi meets
Schoenberg’) which Ticciati brought to the Wigmore Hall, for a weekend of performances and discussion. In this final concert, entitled ‘Voices
from Afar’, Ticciati was joined by cellist Leonard Elshenbroich and the singers of VOCES8. With Monteverdi’s sestina ‘Tears of a lover at
the tomb of the beloved’ (from his Sixth Book of Madrigals) establishing the context, the musicians presented four modern works — by Arvo
Pärt, John Tavener and Pēteris Vasks — which made a persuasive argument for the ways in which the past continues to be an inspiration for
the present. 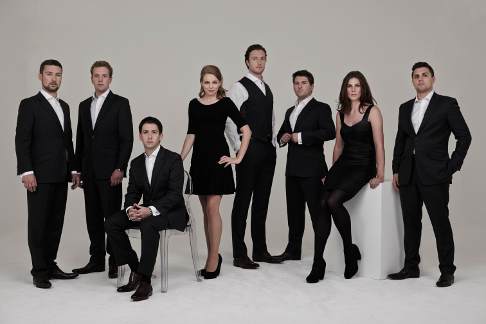 The rhythmic simplicity and unadorned vocal lines of Arvo Pärt’s Magnificat might be considered more ‘medieval’ than
‘Monteverdian’ although, in keeping with Renaissance theories relating to the dominance of word over music, the rhythm is provided solely by
the text. Here the syllables of the Latin text were gently and evenly enunciated conveying tender devotion; the homophonic textures were perfectly melded
and changes of dynamic unanimous.

The vocalists showed a sound appreciation of Pärt’s compositional practice and a firm command of the vocal techniques and control necessary to
serve the music’s spirituality. In the opening bars, the calm interweaving of medieval polyphony is given a modern twist, as the entwining voices are
of the same register. Here, around the first soprano’s C-natural drone, the second soprano voice moved freely; the intonation was sure, creating
pungent, short-lived dissonances which established the work’ simple austerity. And, these two- and three-voice interactions, both in close proximity
and set at more widely spaced remove — as when bass meandered while high above the soprano sustained a drone — served, paradoxically, to create
a powerful sense of movement within the overall stillness.

In the passages of tintinnabuli, the long notes were impressively sustained, with no loss of tone; intervals were pure and the phrases
were unhurried. The extended, fluid lines with their repeating melodic fragments were naturally elongated at the phrase-ends: there was no feeling of
cadence, just infinite suspension; not exactly timelessness, rather the extension of time beyond arbitrary measure.

In contrast, in Pärt’s Dopo la vittoria the spiritual reverence and serenity was replaced by narrative movement and a light energy
which was almost madrigalian. The text is an Italian translation of an account in the encyclopaedia ‘A Historical Survey of Ecclesiastical Singers
and Songs’, written in Russian, of the story of St. Ambrose baptizing St Augustine; during this baptism, Ambrose begins to see the ‘Te
Deum’ and is joined by Augustine, so establishing the chant as it has been known ever since. In the central, more tranquil episode there was some
wonderfully focused singing from the lower voices, in the parallel writing for tenor and bass. VOCES8 gave brightness and emphasis to the statements of the
words of praise — first, ‘Te Deum laudamus’, then the Italian equivalent, ‘Lodiamo Te o Signore’,, and finally text from the
end of the Te Deum, ‘In Te, o Signore, ho posto la mia’ — creating, especially in the magnificently resounding, uplifting
‘Amen’, a mood of impulsive elation and sincerity.

There is no text in Pēteris Vasks’s Plainscapes, a vocalise for mixed voices, violin and cello, which depicts the unending plains and
sky of Latvia during a dark, cold winter, into which sparseness bird-song emerges. VOCES8 formed a soft, wordless accompaniment for Ticciati’s
opening motifs, which began with an imperceptible, stratospherically-high pitch which fell in register, gradually gaining form and weight, and which
evolved in partnership with the cello into strong, searching string lines, intense and rich instrumental explorations between the vocal strophes. Ticciati
and cellist Leonard Elschenbroich adopted an uncompromising approach, imploring and challenging the ears and attentiveness of their listeners — and
their vocal accompanists. Elschenbroich plays a cello made in Venice in 1693 by Matteo Goffriller, and he makes his instrument sing with heart-moving
expressiveness. But here, while the initial serenity was superseded by a growing restlessness, the dynamic volume remained subdued, the inner energy of the
cello’s climbing phrases always contained. I was impressed too by the way that Ticciati moved to and from the foreground, always aware of his role
within the whole, while ensuring that the harmonics, pizzicato and glissandi spoke clearly. Having established a mood of ethereal abstraction, VOCES8 then
imitated bird-song, employing glissandos, stuttering sounds and noises, and vocal colours to evoke Nature’s song. This was a fearless performance of
a striking work.

John Tavener’s Svyati sets a Church Slavonic text from the Russian Orthodox service, a text which the composer explained is sung
‘after the congregation have kissed the body in an open coffin at an Orthodox funeral’. The cello represents the Priest or Ikon of Christ, and
Tavener instructs that the cellist should be spatially separated from the choir: and so Elschenbroich was a lone figure on the platform, the singers of
VOCES8 standing in the gallery at the rear of the Wigmore Hall.

The distance between choir and ‘priest’ did, however, occasionally impact upon the immediacy and intensity of the dialogue between them. For
while the basses’ drone was deep and true, evoking the eternal truths of plainchant and also conveying a throbbing melancholy, some of the choral
statements of the prayer for mercy seemed somewhat detached and did not blossom with sufficient warmth or grandeur. But, Elschenbroich’s reverential
song was utterly transfixing, encompassing an astonishing range of expression, the lines spun out in impossibly long threads. The cellist was totally
immersed in the aching tensions of the music, and the closing moments were spell-binding.

The concert began with Monteverdi’s ‘Lagrima d’amante al sepolcro dell’amata’ (Tears of the lover at the tomb of the
beloved). The Sixth Book of Madrigals comprises songs of mourning and loss, with the five-part sestina — a lament for ‘the little Roman
girl’ (‘Signora Romanina’ thought to be the singer Caterina Martinelli, for whom the title role of Arianna was written) —
forming the central item of the collection. VOCES8 attentively explored the evolving sentiments of the text, as depicted in the emotive madrigalisms and
dissonances, and the changing vocal textures: at times the voices sank low and moved as one sombre unit, elsewhere the individual strands wound around one
another, as if in tortured debate. Occasionally, as the vibrato in the upper voices broadened as the dynamics or tessitura rose, the precision of the
tuning was affected. This was quite a ‘theatrical’ rendition, the sound resonant and vivacious, and — uncharacteristic of the evening
— I was not entirely convinced that the five singers had captured the song’s spiritual solemnity.

But, the musical offerings which followed were characterised by brave and inspired musicianship. In this regard, Ticciati demonstrated his own skill,
imagination, and audacity, in the solo improvisations which opened the second half of the concert. The violinist’s playing was by turns
extraordinarily vivid, then daringly withdrawn; the eloquence of a lament was gradually transformed, through ornamentation, repetition of fragments,
delicate changes of weight, explorations of texture, with Pärt’s Fratres an obvious inspiration. Ticciati’s absorbing performance
was emblematic of the arresting nature of all the music performed during the evening, and of the musicians’ unwavering commitment and ability to
communicate the music’s genuine spirituality.