Heightened security was evident with the search of all small hand bags entering the theaters, large bags and backpacks were prohibited.
Before the Entf¸hrung Aix Festival general director Bernard Foccroulle (foe-crew-yeh) appeared before the audience to make an apology for the production by Austrian director Martin Kuöej (koooo-shy) who may have insisted, at least should have demanded that Mr. Foccroulle explain why the festival had eviscerated his production.
Mr. Foccroulle evidently wished to avoid a confrontation such as had occurred a few nights earlier when during a performance the Covent Garden Guillaume Tell audience forcefully objected to graphic violence. Mr. Foccroulle announced that images which might be unsettling to the spectators had been expunged. In some ways the curtain speech was a brilliant move. Once into the first scene (buried in sand up to his neck, only Pedrillo’s un-embodied head saw much of the first act) we knew the specific image in question and it haunted us for three hours before lightening struck. 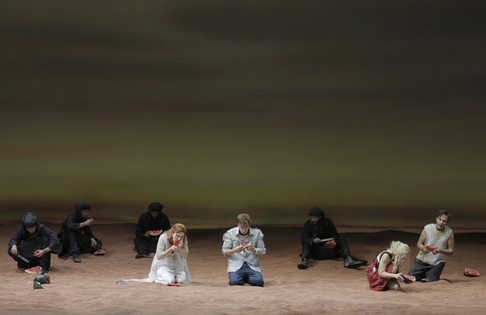 Jane Archibald as Konstanze and Daniel Behle as Belmonte
All Abduction photos copyright Pascal Victor, courtesy of the Aix Festival.
Make no mistake. The evening was not about Mozart even though the oeuvre of this Austrian composer is the raison d’Ítre of the festival. It was about brutality.
After director Kuöej’s Covent Garden Idomeneo fiasco (2013) there could only have been trepidation as to just what he would subject Entf¸hrung. In London (and in Lyon where I saw his Idomeneo production) Mr. Kuöej found not the liberation granted by 18th century ideals but the revelation that citizens will never be free as long as there is religion. In Entf¸hrung the message is sort of the same, except here it emerges in powerful personal terms as the pasha Selim Bassa, played by veteran Austrian actor Tobias Moretti became the central focus of this theater production. 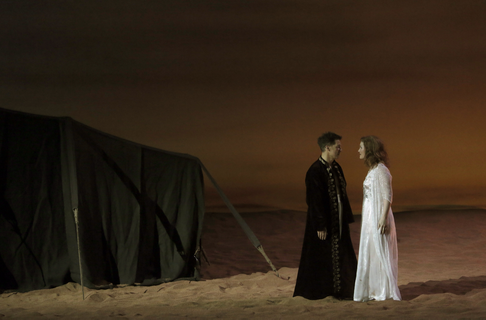 Tobias Moretti as the Pasha, Jane Archibald as Konstanze
The Pasha is resident of a lone military tent along with a band of Uzi bearing soldiers in a vast desert where sand flowed horizonlessly into a featureless sky. It was in digital high definition color resolution, more real than real — the production was of utmost contemporary technical theatrical sophistication.
The soldiers and their lieutenant Osmin were completely covered in Islamic State black, the Pasha however was in a fashionable, sophisticated Western business suit. Except when he was in loin cloth, whipping himself for love with thorny stemmed roses in a twisted take on the Islamic self flagellation ritual.
The first part of the evening (the escape quartet as its finale) was tough going, having to reconcile irritation at the Foccroulle apology with the heavy handed, blatantly obvious, patently political imagery while dealing with Mozart’s famed musical enlightenment. The second part of the evening left the music in the dust in a series of mostly soundless flash scenes. No more opera, now pure theater. The triumphal chorus sung from the pit, Osmin threw the blood covered white gown of Konstanze — though without her severed head — at the feet of the visibly shaken Pasha. It was big and it was profound.
At the intermission audience comments overheard were mostly that there was too much dialogue. In fact the exposed head of the buried Pedrillo itself tried to move things along suggesting to Belmonte that he stop the “fucking talking and start singing” (or maybe it was the other way around). As the primary enemy of Islam seems to be the Americans the production made much use of such colloquial speech in the dialogues (three of the four lovers were actual Americans), alternating with the Pasha’s hoch theatrical Deutsch declamation and Gottlieb Stephanie’s pretty German verse as set by Mozart. 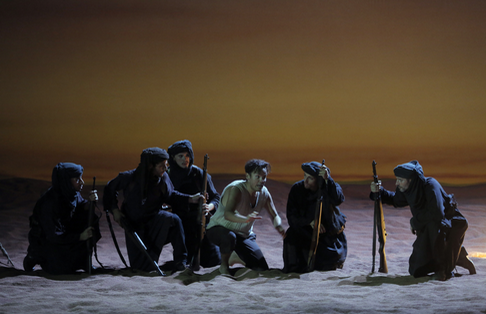 David Portillo as Pedrillo
There was simply too much singing. French conductor JÈrÈmie Rhorer made the mighty Freiburger Barockorchester into a delightful salon orchestra, imposing lightness and a pleasing elegance to the overture. This informal approach was imposed on the singers as well, the arias delivered quite intimately, in stark contrast to the far more powerful rhetoric of the production. The opera itself was the boring if a necessary part of the evening.
There were occasional bright spots, in particular a sweet and beautifully sung “Martern aller arten” by former San Francisco Opera Adler Fellow Jane Archibald and a strong and smooth “Konstanze, Konstanze, dich wiederzushen” by German tenor Daniel Behle. Texas tenor David Portillo and American soprano Rachel Gilmore were the willing Pedrillo and Blonde (we train them well in the U.S.), and German bass Franz-Josef Selig made Osmin a fearsome fighter.
A different set of potential audience vulnerabilities were attacked in Alcina, though about these Mr. Foccroulle remained silent. Within moments of the start of the opera German soprano Anna Prohaska as Alcina’s sister witch Morgana was strapped to a bed, legs splayed downstage, her private parts tickled by a feather duster (these were the coloratura moments of her “O s’apre al riso”), and then, in rapture, she was whipped by Bradamante, the Serbian mezzo Katarina Bradic.
There was no question that British director Katie Mitchell’s Alcina would take place in an English manor since all Ms. Mitchell’s theater pieces are domestic comedies. Here the household was that of two aging spinster witches whose magic created a luxurious sex den where they preside as gorgeous women, Alcina voluptuously — think of the coloratura passages — fucking Ruggiero in her first aria. 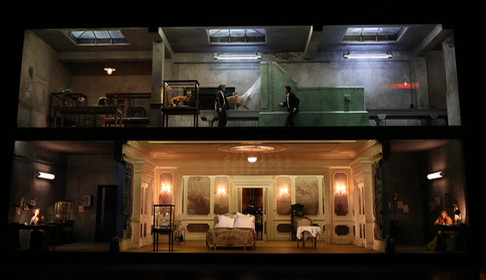 Scenery design for the Katie Mitchell production by Chloe Lamford
All Alcina photos copyright Patrick Berger, courtesy of the Aix Festival
Though when passing from that magical room into their taxidermy workshops both witches become old hags.
Upstairs (surely the Aix Festival recycled Katie Mitchell’s Written on Skin production) was the machinery that transformed men into beasts. Indeed we watched as Astolfo (mute presence) was conveyor-belted into the transformer to emerge as a magnificent stuffed mountain lion. Meanwhile Astolfo’s son, Oberto, a real 12 year-old boy soprano arrived searching for his father. Oberto has two sizable arias (artfully delivered by either Elias M‰dler or Lionel Wunsch according to the program booklet). He was carrying a stuffed teddy bear and was carefully ushered from the room when the sex got intense.
After being passively raped by Alcina male soprano Philippe Jaroussky as Ruggiero allowed himself to be meticulously cleaned up by four household maids in efficiently prim black dresses even though one was male. Ruggiero’s fiancÈ Riccardo was taller and obviously stronger than he and had a real female voice though it was much lower and stronger than his voice. Melisso, the only real male voice on the stage, Polish bass Krzysztof Baczyk (we exclude Oronte because he is a lovesick tenor), meticulously combed Ruggiero’s hair to refresh his masculinity.
Mr. Jaroussky always did seem a bit bewildered, and he did sing more than any of the other characters as well, his lyric soprano voice needing more strength than it could possibly muster, often confusing itself with the same colors as the voices of real female lyric sopranos. The lovesick tenor Oronte, British tenor Anthony Gregory was a willing captive of Morgana who lovingly whipped her during her brilliant Act III aria only to know that he will lose her in his meltingly beautiful aria “un momento di contento.” 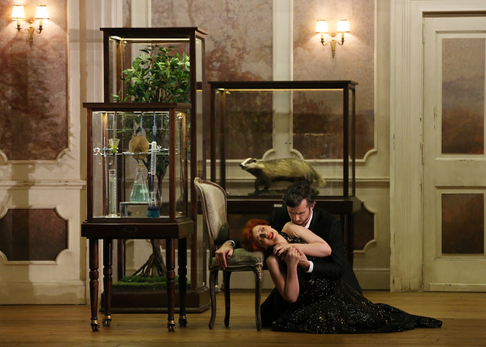 Patricia Petibon as Alcina, Anthony Gregory as Oronte
It was magical, completely magical, made magnificent by Patricia Petibon as the ravishing, red haired Alcina, whose “Ah mio cor” included a high E shriek and then ended the first part of the evening. The audience was left stunned and remained in their seats to give an extended ovation to the fallen curtain. She began the second part with her “Ombre palide” and ended the opera with the spectacular “Mi restano le lagrime,” emotionally emptied in maximum eloquence supported by the heartbroken Oronte, dragging her body across the stage in a succession of beautifully choreographed poses. It was wrenching.
When this wonderfully teasing, titillating magical world was destroyed and the fantasy of two old spinster sisters evaporated, we grieved. The sisters were then placed in the glass case sarcophagi that had held the captive males of their most secret lives. It was a moving end.
And we did not give a damn that Bradamante and Ruggiero were now free to continue their fight to save Europe from Islam.
P.S. The Freiburger Barockorchester was once again mighty, Italian conductor Andrea Marcon honestly provided all the bite and drama necessary to amplify Handel’s splendid drama as envisioned by Mme. Mitchell. It was thrilling indeed when the horns cut loose at the end. The two theorbo players, Daniele Ciminiti and Maria FerrÈ sat just under center stage, pouring their hearts out in the arias.
Michael Milenski