The Castleton Festival in northern Virginia will premiere his opera Scalia/Ginsburg on July 11, 2015. He based it on the writings of two justices who have maintained a friendship for many years despite a wide divergence of opinion: Antonin “Nino” Scalia and Ruth Bader Ginsburg.
Both justices grew up in New York City and attended Ivy League schools. The positions they took upon finishing graduate school show their viewpoints. Scalia joined the Nixon Administration and also founded the strictly conservative Federalist Society. Ginsburg joined the American Civil Liberties Union and led its Women’s Rights Project.
Outside of business hours, their mutual respect allows them to enjoy each other’s company. In former years their meetings were made even more fun thanks to the charming personality and excellent cooking of the late Martin Ginsburg. Not only do Scalia and Ginsburg still dine together, they attend the opera and even vacation as a duo. 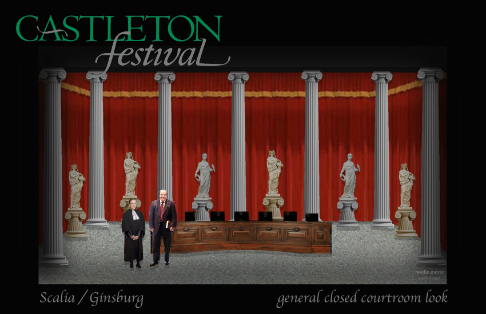 They met in the early 1980s when they were judges on the US Court of Appeals. Scalia was appointed to the Supreme Court in 1986 and Ginsburg in 1993. Essentially, they disagree on whether the Constitution is living and evolving or dead to change. Scalia believes that it still means what the founding fathers said it meant when they adopted it. He fears that otherwise it could be subject to whimsical changes. Ginsburg believes that its framers meant to allow it to be adapted to the times. She says that his originalist approach is not faithful to the idea of “We the People.” She maintains that the Constitution has to expand to cover more than the white property-owning men who were once “We the People.”
Scalia begins in strict adherence to the text of the composition. He says, “She likes opera and she’s a very nice person. What’s not to like?–Except for her views on the law!” Ginsburg recalls the first time she heard “Nino” speak at a law conference. “I disagreed with most of what he said but loved the way he said it.” Ginsburg believes in a “living Constitution” that can be reinterpreted as times and customs change. She thinks that the constitution’s guarantee of “equal protection” under the law evolves with society.
Composer-librettist Wang began to think of Scalia as an operatic character when he read the judge’s dissenting opinions as a law student at the University of Maryland. To him Scalia’s passionate opinions were material for rage arias. Wang was invited to the U.S. Supreme Court to present excerpts from Scalia/Ginsburg. The Glimmerglass Festival, Washington National Opera, Maryland Opera Studio, The National Constitution Center, Stanford Arts Institute and Stanford Law School are among the organizations that have also presented selections from Scalia/Ginsburg.
The plot involves the justices appearing before a higher power. Scalia and Ginsburg must pass three cosmic trials to secure their freedom. Will they have to agree on the Constitution? They will give their opinions in song, reveling in references to well known operas as they sing sparkling comments on music and law.
Originally, one statue, The Commentator, was to come to life in a manner similar to the Commendatore in Mozart’s Don Giovanni. Because the opera is a comedy, set designer Julia Noulin-MÈrat thought it might be fun to have five more statues comment on the proceedings while illustrating the legal jargon that the justices and lawyers use in court. Stage Director, Maria Tucci developed the idea with costume designer, Lara de Bruijn and named the other statues: Equity, Ethics, Fairness, Rationality, and Religion.
Performances at the Castleton Festival are on July 11, 17, and 19, 2015. US Supreme Court Justice Ruth Bader Ginsburg will speak about the new opera at its premiere which follows a performance of Maurice Ravel’s L’heure espagnole (The Spanish Hour). That performance, however, is already sold out. As of this writing tickets are still available for the other two shows. The production’s opening night performance is also being live streamed online at the Castleton Festival’s website.
Maria Nockin