Trollies of detritus in the old rogue’s bed-chamber testify to
several days of epicurean revelling, the bourgeoisie of Windsor are a quartet
of ‘ladies who lunch’, Fenton is a hotel waiter, Falstaff’s thwarted
assignation with Alice Ford takes place in the kitchen; even the stable horse
who in Act 3 indifferently watches over Falstaff’s glum reflections on the
grim state of the world gets in on the act, munching stoically from a hay-bag.
Such gastronomic excess seems fitting for an opera whose protagonist avows (in
Henry IV Part 1), ‘let a cup of sack be my poison’ and faces his
battles with the rallying self-reassurance, ‘To the latter end of a fray and
the beginning of a feast/ Fits a dull fighter and a keen guest’.

Carsen transports us from the end of the first Elizabethan era to the
beginning of the second — the ‘Golden Age’ of the 1950s — an updating
designed (so Ian Burton, Carson’s dramaturg explains) to highlight the
loosening of social and class hierarchies characteristic to both periods in
which the diminishing aristocracy were challenged by the emergence of ‘new
money’ and a rising working-class. Paul Steinberg’s terrific sets are a
riot of retro memorabilia — at least, in the opening two Acts — and are
matched for period panache by Brigitte Reiffenstuel’s colour-clashing
costumes. The Garter Inn is no longer a shabby hostelry but a mid-market
country hotel, its panelled walls decorated with the antlered prizes of hunting
parties past, and whose guest are a bunch of nouveau-riche social
climbers. From the gentleman’s lounge we move to the Fords’ formica
kitchen, where the bright yellow colour scheme and plethora of gadgets are
evidence of the couple’s consumerist optimism. 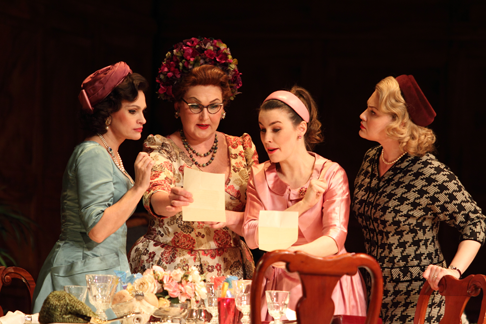 Amid these fashion-conscious upstarts and entrepreneurs, Sir John is a
figure of fun and fading fortune: a foul-mouthed reprobate whose waistband
expands as his social standing and purse deteriorate. He may don country tweeds
and a scarlet hunting frock-coat to impress the ladies, but it’s the filthy
long-johns of the opening scene which are the best fit.

The visual apparatus is impressive, but Carsen does not neglect the
stagecraft which responds neatly to Verdi’s musical structures. The movement
is sometimes frenetic but always just the right side of chaos: and the
ransacking of the domestic order by Ford and his grey-suited employees, as they
search in vain for his reputedly adulterous wife and the back-stabbing Falstaff
is a scream. But, there are moments of intimacy too — significantly aided by
Peter Van Praet’s lighting design — which create oases of calm amid the
clamour. Fenton and Nannetta snatch brief moments of private tenderness between
the courses of a public meal; Ford’s jealous rant is cloaked in an eerie blue
half-light.

However imaginative and slick the direction, Verdi’s opera stands or falls
by its protagonist, and it’s hard to imagine a baritone better suited to, or
more astute in, the role than Ambrogio Maestri, here returning to the role he
played in the 2012 first production. In the role-playing scene in Henry IV
Part 1, Falstaff (play-acting King Henry IV) describes himself as a
‘virtuous man … A goodly portly man, i’ faith, and a corpulent; of a
cheerful look, a pleasing eye and a most noble carriage’ only to have his
pomp punctured by Hal’s accusation that the old Knight is an ‘abominable
misleader of youth, Falstaff, that old white-bearded Satan’. Maestri, through
his attention to dramatic and musical detail reminds us how difficult it is to
‘pigeon-hole’ Sir John: is he a hard-headed conman or a harmless comic
buffoon; a self-gratifying glutton or an aging ‘gentleman’ surrounded by
uncaring hangers-on and chancers? 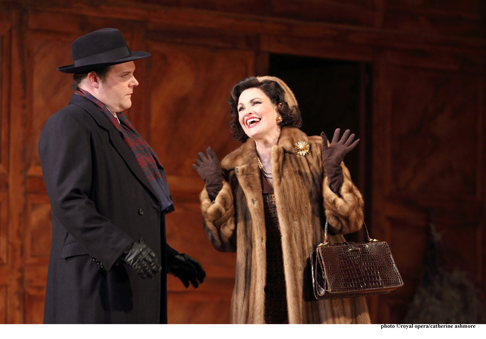 Roland Wood as Ford and Inhoa Arteta as Alice Ford

The ‘fat rogue’ is defined by his corpulence: without it, he fears ‘my
skin hangs about me like an old lady’s loose gown; I am withered like an old
apple-john … I shall be out of heart shortly, and then I shall have no
strength to repent’. Maestri has the physical and vocal presence, and the
relaxed demeanour, to convey Sir John Falstaff’s mythic status and epic bulk,
as well as the thoughtfulness and insight to offer subtleties too — to hint
at, though not over-play, the complexities, darkness and pathos, beneath the
affectionate parody. He may have embodied the aging Knight of the Garter
countless times but there was no sense of routine or staleness. We had bombast
and bathos; felt repugnance and pity. Maestri is a big man, but he is nimble of
footwork and of voice. His is a powerful baritone and whether yelling for
‘another bottle’ or damning the tattered scroungers who linger like
scavenging seagulls in Falstaff’s wake, Maestri boomed generously; but he
recognised the moments to hold back, occasionally retreating to almost a
whisper, and it was at such times that a more vulnerable Sir John showed
himself. The sheer beauty of tone, particularly at the top, was beguiling;
sufficient to sweep aside any moral misgivings about Falstaff’s selfish
debauchery. No less impressive than the vocal control and variety was
Maestri’s relish for the words — his appetite for the nuances of the text
was equal to the Fat Knight’s craving for capon and Chianti.

When the comic temperature is high, there is always a risk of caricature,
but the splendid cast served up real characters whose ostentations and
affections were tempered by humanity. Of the merry wives of Windsor, Ainhoa
Arteta’s Alice Ford excelled; Arteta relished Verdi’s luxurious melodies,
which she coated with the sheen of a pearl, floating glisteningly in the
ensembles. As Mistress Quickly, Agnes Zwierko was a busy stage presence and
worked hard vocally, colouring her ‘Reverenza’ with faux-veneration;
although she needed a bit more fruity contralto depth to really vivify the
role, Zwierko acted superbly, especially when delivering the missives of
deception and when hoodwinking Falstaff at the Garter Inn.

Kai R¸¸tel’s Meg Page exhibited a warm vocal sensuality, but it was Anna
Devin’s Nannetta who took one’s breath away. Nannetta’s every phrase drew
one’s attention, as the floaty lines soared with power and lyricism. I loved
the way in her first romantic exchange with Fenton in Act 1 that the high Ab
first established Nannetta’s clarity of conviction, then retreated demurely,
before surging with burning passion. Such vocal control suggests real artistry
and musico-dramatic intelligence. 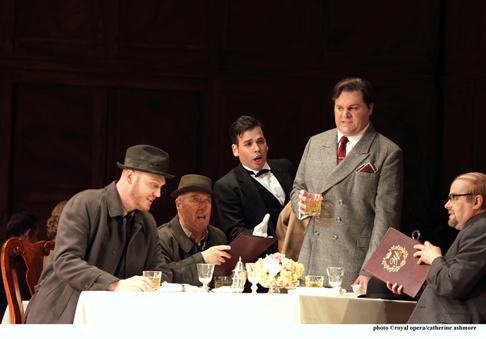 As Bardolph, Alasdair Elliott’s tenor was agile and focused, and the
mis-matched heights of Bardolph and Pistol (Lukas Jakobski) created immediate
visual humour; but there is a darkness about the gangsters’ loitering with
intent for ill-gotten gain. The pair are tattered scroungers who will steal a
diner’s handbag while passing them their dropped napkin, and even find
rich-pickings in the Fords’ dirty laundry: one feels that Sir John’s filthy
underwear would be filched if the opportunity arose. Peter Hoare’s Dr Caius
was characteristically precise and strong.

Roland Wood was engaging as Ford, particular when as ‘Master Brook’ –
a Stetson-sporting Texan tycoon — he bantered with Maestri: this was one of
the evening’s comic highlights. Wood was able, however, to tip strikingly
from jape to jealousy, and his long soliloquy was intense and compelling. Jette
Parker Young Artist Luis Gomez was a suave-toned Fenton, but he needed a bit
more dramatic vivacity to match Devin’s resolute Nannetta.

Things moved swiftly, but not precipitously, along under the direction of
conductor Michael Sch¯nwandt, who launched the opening moments with dazzling
bravura and just about kept the complicated finales of Act 1 and 2 under
control. The ROH Orchestra were on characteristically good form, although given
the way Verdi’s score tells the tale, they occasionally seemed in danger of
being over-shadowed by the mad-cap activity on stage. But, woodwind solos –
especially clarinet and bassoon — came neatly to the fore, and the horns
demonstrated nimbleness and sweetness of tone. The double basses kicked off Act
3 with a delicious growling; the first violins’ steep and speedy tumbles were
cleanly executed.

If there is any weakness in Carsen’s direction, it is in the final Act,
where the munching horse distracts from the pathos of Falstaff’s
post-Thames-dip lamentations, sung by Maestri on a heap of straw at the back of
the stage, and where the panelled walls do not sufficiently summon the magic
and mystery of Windsor Great Forest, despite the effusions of dry ice. But, as
the ‘Queen of the Fairies’, Devlin provided mesmeric musical compensation
in ‘Sul fil d’un soffio etesio’, calling the fairies from their hiding
place and commanding them to dance; and the final image of a be-horned Falstaff
rolling along the gang-plank banqueting table, the target of black-cloaked,
knife-wielding figures, was a potent one. In the closing moments of the opera,
Carsen restored what might, given the forest setting, be termed a spirit of
pastoral harmony and reconciliation. As Boito and Verdi remind us, he who
laughs the best is he who laughs last; a fitting sentiment for the audience as
we left the theatre with a smile on our faces.