At 11 a.m. on a Monday morning three priests sang a mass for a dozen elderly
women and one man, all dressed in traditional peasant costume. As is Russian
Orthodox custom, they stood at seemingly random spots on the stone floor. To
complete the Dostoyevskian scene, one mentally challenged man sat in the corner
rocking and mumbling to himself. As I slipped in, a priest turned to face an
altar of icons and began to sing the liturgy. In that space, his deep bass rang
forth smoother, warmer and more resonant than anything I have heard on an opera
stage in several decades. After a few minutes, he signaled to the congregation,
which joined him in perfect four-part harmony. The visceral power of
full-throated human voices singing a capella rooted me to the spot,
transfixed.

The music I heard that morning lies at the heart of the tradition of Russian
epic opera, with its massive choruses, giant bells, grand bass roles and
sweeping themes of sacrifice, guilt and redemption. Of such works,
Mussorgsky’s Boris Godunov and Khovanshchina
are most commonly performed in the West, but the same tradition
spawned an opera I had heard the night before at White Nights, Nicolai
Rimsky-Korsakov’s The Maid of Pskov (Pskovityanka, also
known as Ivan the Terrible). Rimsky-Korsakov composed it alongside his
roommate Mussorgsky, who was working on Boris at the time. It tells
the story, well-known to Russians, of how the ancient town of Pskov lost its
freedom to Tsar Ivan IV Vasilyevich in the 1500s. It recounts the death of a
young maiden, Ivan’s lost daughter, who is caught between her lover, a
diehard defender of ancient liberties, and her father the Tsar. The opera is a
modest national treasure almost never performed outside of Russia. 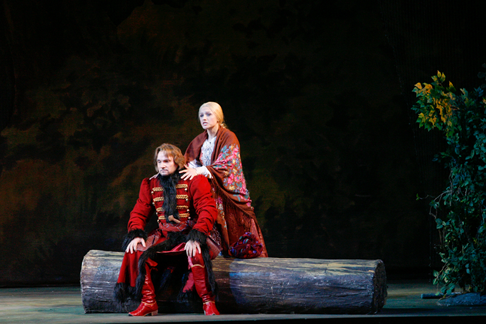 The opera calls for a bass with great vocal and dramatic charisma to sing
Ivan the Terrible. The Tsar’s initial scene, for example, contains mostly
sung recitative of constantly changing moods: a sarcastic aside is followed by
an imperious command, a sudden moment of tenderness, a request for food, and an
expression of world-weariness. Fyodor Chaliapin, whose self-portrait still
hangs on the wall of a practice room at the Mariinsky, was legendary in the
part. Though we have no recording, one can imagine how he must have savored its
theatrical potential, turning on a kopeck to inflect each line differently, and
projecting it to the back row of this very same hall.

Yet where have the great Russian basses gone? Consider Alexander Morozov,
who sang the role as I heard it performed on 5 July. Not only is he no
Chaliapin (who is?); he does not even possess a basic instrument in the same
league as that of Vasily Gorshkov, who sang the Boyar Matuta with fluency,
feeling and reasonable fullness of sound. A Tsar Ivan the Terrible who cannot
vocally overpower a local boyar of Pskov not only sucks the life out the
musical score, but makes nonsense of the dramatic proceedings. At times Morosov
was completely inaudible from the ninth row over modest orchestral forces, and
in the final scene he gave up, bawling and hamming instead.

Mariinsky insiders told me that Morozov was second-best, though his name was
on the cast list from the start. (Perhaps Alexei Tanovitski would have been
preferable, despite rumors of recent vocal troubles.) Music Director Valery
Gergiev did cancel, which is a widespread problem in St. Petersburg. In La
Traviata, for example, superstar Anna Netrebko was replaced as Violetta by
the darkly passionate but uneven young Oxana Shilova, evidently taking with her
Latvian tenor Aleksandrs Antonenko and again Music Director Gergiev. Is the
economic crisis is sapping internationally active artists from the festival?
Until this is sorted out, those contemplating a trip to the (so-called) Stars
of the White Nights should beware!

Yet the problem of basses is clearly more fundamental. Many Russian opera
administrators voice deep concern about the lack of basses up to the standards
of their illustrious predecessors. Even if we leave Chaliapin out of it, one
can track that decline in the role of Ivan the Terrible from the standard a
half century ago (Aleksandr Pirogov in the 1947 Bolshoi recording of this opera
and Boris Christoff in live recordings from the 1950s and 1960s) to what has
been on offer more recently (Vladamir Ognovenko’s solid portrayal in
Gergiev’s 1994 recording and the basses mentioned above). A chasm has opened
up between what one hears in Orthodox churches and what one hears on a Russian
opera stage. Until it is closed, it will be difficult to do full justice to
this vital repertoire. 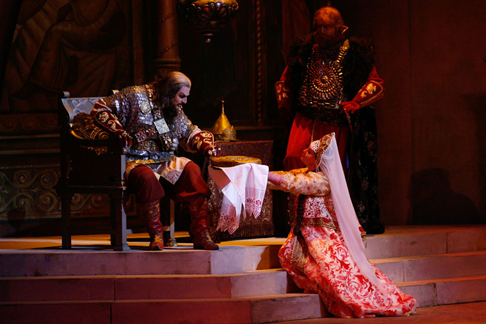 Despite the gaping vocal hole at its core, the Mariinsky production was most
other respects enjoyable. Best of all was the old theater itself (so-called
Mariinsky 1), which dates from 1860. It is not only lovely to behold, with
gilded gold, straight-backed chairs and a pale blue-green painted ceiling. It
is also—to judge from what we heard from Row 9—one of the most acoustically
live and well-balanced opera houses in the world, with full, immediate and
pin-point directional sound. The visceral experience of opera there bears no
resemblance to brassy yet distant impact of opera in big halls like the Met and
the Bastille (or even the newly opened Mariinsky 2), or even the somewhat less
immediate impact of opera in other great houses, such as the Wiener Staatsoper
or Covent Garden. While the orchestra under the young Finn Kalle Kuusava was
sloppy at times, certainly lacking the punch Gergiev gives such works or the
romantic sweep imparted by Simon Sakharov fifty years ago, it sounded vital in
the hall.

The Mariinsky Maid of Pskov is a Fyodor Fedorovsky production
dating from 1952 (refurbished by Yuri Laptev in 2008) and its staging of the
cities and landscapes of old Russia reminds us how much color, romance,
grandeur and realism traditional painted flats can offer. Diehard advocates of
Regietheater would have been bored by the straightforward, almost
fairy-tale, nostalgia, but the approach seemed to me just right for this
excursion into medieval life. Moreover, flat and closed sets reflect sound
well, adding to the hall’s acoustical glow.

Aside from Morosov’s weak and Gorshkov’s strong showing, the singers
acquitted themselves competently. Maxim Aksenov possesses a strong, somewhat
metallic tenor, with a more burnished tone at the top than the bottom—the
right kind of voice for Mikhail Andreyevich Tucha, the romantic young defender
of a city doomed to servitude. Soprano Svetlana Aksenov?, who sang Princess
Olga Yurievna Tokmakova (the maid of Pskov), sang in the modern way: evenly,
correctly, well-projected, slightly pushed, with a bit of Slavic steel in the
voice, and without a great deal of feeling or character. Veteran mezzo Lyudmila
Kanunnikova used a large voice and idiomatic style to advantage in her Act One
cameo as the wet-nurse. The other princes, boyers and officials, notably Yuri
Vorobiev, as well as the chorus, sang with virility. While none of this could
be mistaken for the top-flight vocalism that can be heard at Glyndebourne,
Salzburg or other top-tier summer festivals in Europe, the whole was more than
the sum of the parts, due to the fine acoustic, superb diction, idiomatic
delivery, and the sense that singers were performing a well-known work from
their distinct tradition that could only be heard here.

The sense of being at a distinctively Russian occasion was reinforced by the
audience—a crowd for which those who seek to expand the appeal of opera
(think Peter Gelb and his PR minions at New York’s Metropolitan) could only
wish. This Sunday-night performance was all but sold out, and the audience
contained quite a number of common people of various ages, including numerous
families with children. Listening to a tale from their own history, they—even
an older gentleman next to us who smelled strongly of vodka—were
well-behaved, attentive and responsive. The clear impression is that, from the
perspective of audiences, Russian opera remains vital in the country of its
origin. Now all we need are some great basses.