Its unique and compelling atmosphere has proved an irresistible magnet to generations of artists and to composers in successive centuries (Lampe,Mendelssohn and Britten inter alia).
On paper the concept of conflating Mendelssohn’s much-loved incidental music with an abridged version of the play itself must have appeared highly enticing, especially given the glorious woodland backdrop of Garsington Opera at Wormsley, and the participation of actors from the Royal Shakespeare Company (RSC) as collaborators. In practice though the ‘wood magic’ was curiously muted and there was an over-riding sense of opportunities missed.
In part this may have been due to a pedestrian account of some of the best-known musical numbers, especially the Overture – a thing of wonder given that Mendelssohn was only 17 when he composed it – and the Scherzo and Wedding March. Curiously, some of the lesser numbers such as the Intermezzo and the various orchestral interjections worked rather better, but by then much of the hoped-for magic had been lost. However, the over-riding reason why the evening was so much less than the sum of its parts lay with the production itself. 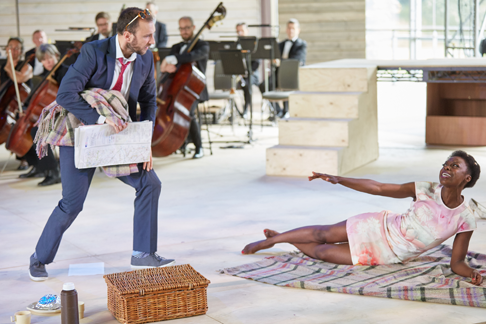 Ross Armstrong as Lysander and Joan Iyiola as Hermia
Of course there is much to amuse an audience in A Midsummer Night’s Dream but to play it as largely undiluted slapstick as happened here is to miss the point. The antics of the “Rude Mechanicals” are undoubtedly slapstick pure and simple – and very good slapstick too – but the point is lost if all the characters are obliged to play to the gallery all the time. After all much of the play’s potency is generated by the juxtaposition of the imagined grandeur and mores of the court of Theseus (a place where girls face execution if they refuse to marry the man of their father’s choice) and the contrast with the earthy slapstick of Bottom, The Wall and the Lion, which was doubtless designed to appeal to Shakespeare’s ‘groundlings’. Add in the sub-plot of marital conflict between Oberon and Titania over her refusal to hand over an Indian boy page whom her husband lusts after and it will be pretty apparent that there is rather more to the play than mere comedy.
Oberon and Titania (David Rintoul and Marty Cruikshank respectively) are both fine actors with the required presence for these roles though not helped in Oberon’s case by being obliged to play the part bare-chested under a cream dinner jacket that made him look as though he had strayed in from the audience but forgotten his dress shirt. Oberon and Titania also double for Theseus and Hippolyta. The two young couples – Lysander (Ross Armstrong), Hermia (Joan Iyiola), Demetrius (Simon Manyonda) and Helena (Hedydd Dylan) who was the best of the quartet – were consistently obliged to ‘ham’ it up, rushing hither and thither across the bare stage like so many demented hamsters. Puck (Oliver Johnstone), also complete in evening dress, and looking for all the world like another slightly younger member of the full-rig audience, was obliged to cavort endlessly round the stage, even at times appearing to conduct the orchestra seated for no particularly obvious reason at the back of the stage. 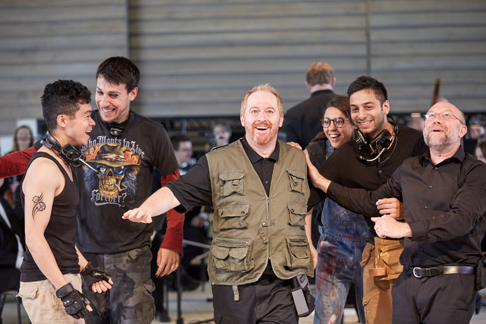 Chris Lew Kum Hoi, Chris Nayak, Forbes Masson, Sophie Khan Levy, Jake Mann, and Timothy Speyer
The cast of ‘Rude Mechanicals’ Quince, Bottom, Flute, Snug and Starveling who double as the players in Pyramus & Thisbe are, of course, obliged to ‘ham’ it up quite mercilessly and they did so with utmost relish, especially Forbes Masson, the ‘Scottish’ Bottom who bore a passing resemblance to George Galloway.
Other missed opportunities. Leaving aside the complete lack of anything resembling a set and the almost obligatory muddle about costumes – basically anyone could wear anything they liked as long as it had nothing whatsoever to do with the period in which the play is set – a fundamental point about A Midsummer Night’s Dream is that most of it takes place in a dark wood. Garsington’s sliding stage doors open straight out onto the woods beyond but this was left unopened rather than used to embed the play in the surrounding landscape.
Finally, the music itself. There are particular problems to performing early romantic music – Weber, Schubert, Mendelssohn and Berlioz – on contemporary instruments because they are so different in power and especially in timbre. These are problems which have been addressed with some success by groups such as the Orchestra of the Age of Enlightenment or the Orchestra of the New Queens Hall. Garsington’s dryish acoustic doesn’t help, especially when the orchestra is seated on stage. To be frank, on this occasion under Douglas Boyd some of the Garsington Opera Orchestra’s playing was distinctly rough and ready – surely it should be possible to get the Overture’s opening and closing chords together and in tune, neither of which happened here – whilst the Scherzo lumbered rather than levitating with a gossamer lightness and the Wedding March was hammered out with the kind of vehemence more appropriate to Mahler’s 5th (I was reminded of sitting in on a rehearsal for Schubert’s Unfinished with Kurt Sanderling who at one point turned to the trombones and said “Never, ever that sound in Schubert”). At least Garsington’s chorus and soloists Anna Sideris and Catherine Backhouse did well with the ‘Fairy’ chorus, “Ye spotted snakes” lulling Titania to sleep. 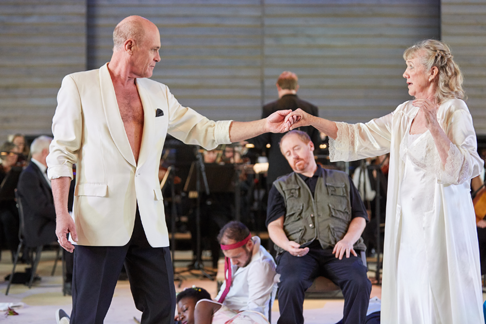 David Rintoul as Theseus, Forbes Masson as Bottom, and Marty Cruickshank as Hippolyta
Sadly, to this listener on this occasion the combination of abridged play and Mendelssohn’s music was unconvincing and a disappointment although in future I shall happily return to Shakespeare’s play, to Benjamin Britten’s opera, even to the ballet … and of course to Mendelssohn’s magical incidental music. There are few more memorable moment in all music than the end of the overture with the strings arching cantilena, a musical benediction made flesh, before those final four simple wind chords? Other people may feel very differently about this production and if they want to make their own minds up it will be repeated this coming week over several nights at the Southbank Centre’s QEH (22nd – 24th July) and then for a single performance at Stratford (26th July).
Douglas Cooksey
Click here for cast information