That is not to say there were not some excellent components in the mix, but the pervasive uneasiness that must underpin any good production of this shocking masterpiece, was in short supply.
Let us start with concept that placed the piece at the turn of the last century. Director Daniel Slater attempted to infuse the work with layers of Freudian introspection so contemporary at that time. There is merit in this to be sure. But I found the result was too often a stand and sing affair that bordered on costumed concert opera.
Mr. Slater was not helped by Leslie Travers’ straight-jacketing formal evening wear and colorful military uniforms, gorgeously executed as they were. Nor was Travers’ giant rotating set very atmospheric or evocative. The “cistern” was relegated to a pit in front of a monolithic cement-block box that had windows and doors aplenty which could reveal different scenarios as the whole shebang spun effortlessly. 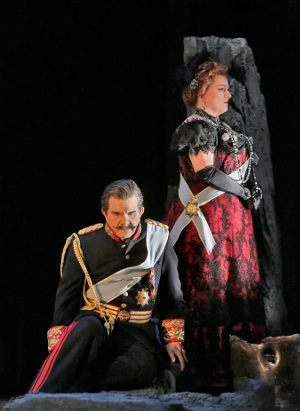 Robert Brubaker as Herod and Michaela Martens as Herodias
For example, Jochanaan was revealed, not in the cistern, but in a crumbling study, where he is frantically scribbling exhortations, resembling Rasputin as a barefoot student ascetic. The opening party referred to by Narraboth, usually offstage, was revealed up and center, looking like a very proper “Downton Abbey” dinner party. Rick Fisher’s lighting design provided all that was required with good area definition and nice gobo effects. The turbulent moon effects, so carefully scripted, were completely absent.
For Salome’s critical dance, the large vertical window opened to create a stage of sorts. As Salome did graceful (if unimaginative) arm gestures, a back wall crept forward to enclose the box, while cockeyed windows revealed Salome as a young girl who witnesses Herod killing her father, who had been imprisoned in the very same cistern that holds Jochanaan. Or that “would” hold Jochanaan, except that we are not using the cistern, but rather the library. Confused?
I only know the above dance scenario to be true since I read the director’s notes. My friend, who hadn’t and who was attending his first ”Salome,” did not understand what was going on.
Salome herself, clad in a chaste blue gown for most of the night, seems more a petulant debutante than the troubled, perhaps sexually abused adolescent. As Salome rather tamely comes on to Jochanaan, Narraboth, in military uniform and sash stands stoically down right, staring out front.
Eventually he starts to get turned on by the trash-talking heroine and slowly, subtly begins undoing clothing and feigning looks of sexual arousal, even removing, crumpling and sniffing his white sash. He never actually looks at the action and when he finally stabs himself, he is looking front.
Director Slater clearly intended this full frontal connection and it is a visual theme. The quarrelsome Jews only occasionally sing to each other, mostly just changing places in a straight line to sing to us. And once they sing, they leave. In fact, everyone does that. 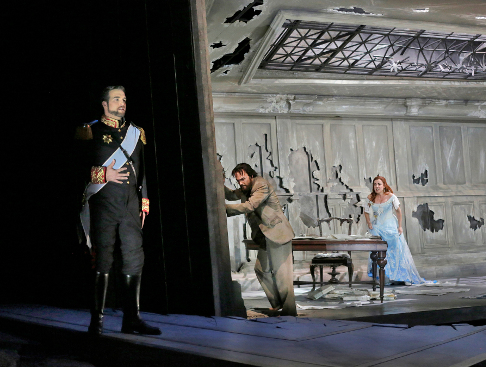 Brian Jagde as Narraboth, Ryan McKinny as Jochanaan, and Alex Penda as Salome
In the last third of the show, Herod and Herodias, alone, gape at the auditorium expressionless through most of the dance and through all of the brutal final scene. If this is supposed to evoke Freudian preoccupation, it was about as exciting as watching a patient lie on a sofa for an hour.
Herod removed his own ring and hurled it off right. This makes hash not only of his asking “Who has taken my ring?” but also of its importance as a royal signal to the Executioner to behead the Baptist. Never you mind because there is no Executioner. Oops. So who killed Jochanaan? I guess Freud did it. . .
Happily, the music-making offered much compensation. David Robertson conducted with a knowing hand, and the sublime orchestra rose to meet every Straussian challenge. The exposed solo work was full of personality, and the cello and contra-bassoon effects were especially affecting. If the Maestro got off to a more deliberate start than other readings I have heard, perhaps it was owing to the distraction of a smattering of entrance applause just as he gave the downbeat. It seems that the production wanted to sneak him on to the podium unremarked, but it is something to reconsider if can precipitate this kind of false start.
For most of the 100-minutes, Robertson and his band struck an admirable balance with the stage. It is not the Maestro’s fault if the evening’s Salome is about one and half vocal sizes too small for the role.
Alex Penda is a lovely artist, exceedingly musical, and she commands a silvery soprano that, when unleashed at forte in the upper register is downright thrilling. Her chest voice has bite and presence. And then . . .there is that pesky lower middle where many phrases, and more to the point, phrase endings, lie.
Ms. Penda’s is essentially a heavy lyric instrument, and to make it speak in mid-range against some dense instrumentation, she pushes it within-but-to her limits. The result is occasional inaudibility, a Sprechstimme that veers off the pitch, or a nasal, childish retort. Salome is a big, big sing and Alex mostly succeeds admirably to conquer the role on her own terms. It should be reported that the audience rewarded her with a generous ovation. 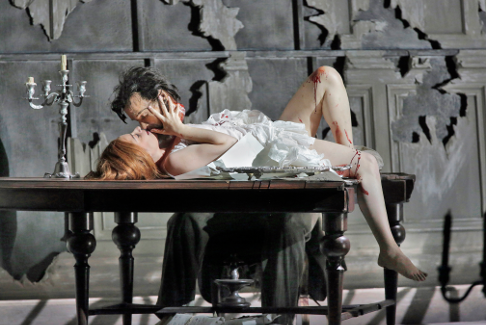 Alex Penda as Salome
She is certainly the right physical type and another production might have capitalized more on her considerable dramatic range. In the final scene, when she was finally unleashed as a prowling cat savoring its victim, she had superb presence. But where was that character specificity the rest of the night? I applaud Alex Penda’s commitment and resourcefulness, but maybe she should let the next Salome incubate a few years.
Ryan McKinny has all the goods for a first tier Jochanaan, namely a meaty, forceful bass-baritone that has powerful point and burnished quality in every register and volume. Mr. McKinny found all the heft necessary for the big statements, and other times sang with sensitivity, understanding, and ever-present beauty of tone. It is a pity that the costume design had him all buttoned down as he is an attractive man, yet there was no opportunity to display the primal physical appeal that fuels Salome’s carnal instincts. Still, Ryan brought an oversize presence to the role and true star power to the evening.
Brian Jagde was luxury casting as Narraboth, a role that could easily have been assigned to one of SFO’s excellent young artists. Mr. Jagde has been singing Puccini heroes of late, and he brought that same full-throated vocal approach to the young Syrian soldier. He negotiates the dramatic outbursts with effusive tone, and he affects an appealing lyricism that underlies the Syrian soldier’s fatal boyish infatuation with the princess.
I have long admired Robert Brubaker’s heroic tenor and his rock solid technique. I wish I could report that the quirky, high-lying Herod was a good fit for this intelligent singer. On this occasion, I wondered if he might have been indisposed (there was a bit smoke in the air after all). Although no announcement was made, he coughed a couple of times and seemed to clear his throat.
Although the usual polished bronze tone was most often securely deployed, some held high tones were negotiated through sheer will. Herod is a tricky part with much angular singing, and leaps to sudden high outbursts. Mr. Brubaker also seemed hamstrung by the patrician, effete characterization that replaced the more unrestrained immoral despot.
As his paramour, Michaela Martens was an imposing Herodias. More dowager empress than aging adultress, Ms. Maertens nonetheless sang with a searing, ripe mezzo that rode the orchestra with ease. Her acerbic protestations had zing and dramatic import. Curious that at opera’s end, her Herodias was made to cross to the extra library chair, remove her jewels and wrap, and embrace Jochanaan’s pre-set jacket. All is forgiven?
Megan Marion sang most appealingly as the Page, Nicholas Brownlee showed great promise as the First Soldier, and Tyler Putnam sang with knowing power as the Second Soldier. The bickering Jews had a freshness and appeal, all of them being taken by Young Artists. Singing with accuracy and fire all five reflected great credit on the apprentice program: Christopher Trapani, Roy Hage, Cullen Gandy, Aaron Short, and Kevin Thompson. Not to be outdone, colleagues Peixin Chen and Adrian Kramer shone as the First and Second Nazarenes, respectively.
Salome was the first opera I ever saw at Santa Fe Opera, back in the day with no less than Josephine Barstow supported by John Crosby in the pit. There have been a lot of productions of it in between for me in places ranging from New York to Paris to Stuttgart. If this current, well-intended mounting had its shortcomings, its many strengths served to reinforce the enduring power of Strauss’s creation, and rekindle a lifetime of Salome memories.
James Sohre