He is Japan’s most important private sponsor of opera. His Sawakami Opera Foundation bankrolls the Kyoto Opera Festival, which, having started
modestly in 2013 – “it was so tiny” he recalls – has now grown to the point where it is about to be renamed the Japan Opera
Festival. It reached Tokyo this year and will offer productions in other Japanese cities in the future. The most exciting new development on Japan’s
operatic scene for a long time, the Festival’s basic principle is to import large numbers of Italian musicians, to slightly supplement them with
local music forces, and to stage Italian operas at locations of outstanding historical and cultural significance. This year two of the four performances of Pagliacci were presented immediately under the keep of Himeji Castle – Japan’s most famous castle and one of its most iconic
buildings. I was able to interview Mr. Sawakami for forty-five minutes on September 14, the day after the first performance of the Festival (which took
place in the grounds of the Kyoto National Museum). He is clearly a very busy man, but at the same time eager to talk enthusiastically about what his
Foundation is doing. 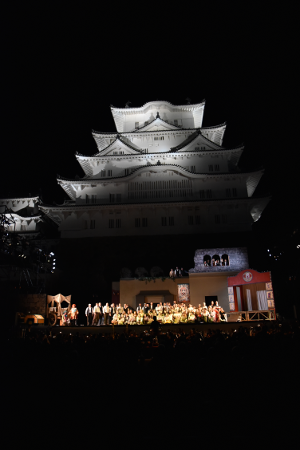 Cast of Pagliacci under Himeji Castle

Somewhat surprisingly, Sawakami tells me that until about eight years ago he had no special interest in opera; he has always enjoyed listening to Western
classical music, but only “a small part” of that was opera. It was the development of his friendship with a promising young Japanese conductor
called Hirofumi Yoshida that caused this to change. Yoshida was building a career in Italy, primarily as a conductor of opera, and he invited Sawakami to
Europe to experience “true” Italian opera. The latter recalls the conductor at that time with obvious affection, “still fighting to be
successful in Italy … living in a very shabby room.” Sawakami greatly admired Yoshida’s determination to make his mark at the
international level and was rapidly convinced that Italian opera was one of the world’s great cultural treasures. Soon he was making three or four
trips to Italy a year. One day Yoshida approached him with a startling suggestion: why not organize a festival of Italian opera in Japan? Yoshida thought
it could be developed, in time, into something like the European opera festivals.

Sawakami’s background is in asset management. “I have forty-five years of experience in global investment,” he tells me, modestly hinting
that few of his erstwhile business rivals have managed to survive so long. But his asset management company encourages customers to do something productive
with their wealth, and he is particularly keen to encourage cultural initiatives: “a better society means culture.” Thus Yoshida’s
proposal received a warm welcome and the Opera Foundation was established. In 2013, two intermezzos by Padre Martini were performed; in 2014, Madama Butterfly. Sawakami and Yoshida clearly work together very well; they never argue, the former tells me. Yoshida makes all the artistic
decisions, including choice of opera, director and performers. Sawakami sums up his own principal contribution with a smile: “I say OK. And then I
pay.” It gets expensive. This year, most of the Filarmonica del Teatro Comunale of Bologna, five of Pagliacci’s six principals (the
exception being Motoharu Takei’s Peppe), fifty-four chorus members and various administrative and support staff, including director Gabriele
Marchesini, were flown over from Italy. Their travel and accommodation costs were paid, in addition to their salaries. I suggest that it must be a great
holiday for the Italians; Sawakami laughs and says “yes! And a great headache for us!”

I put it to him that it would surely be a lot more cost effective to make greater use of Japanese musicians. Sawakami devotes some time to explaining that
the Festival is not interested in saving, or making, money. This is about art – “pure art” he emphasizes. He and Yoshida believe
that levels of performance are still higher in Italy: “the top level is the top level … But we’re glad to see the Japanese level coming
up.” With most of the singers coming from Italy, the productions can be rehearsed there before being brought to Japan and incorporating the few
Japanese performers, the latter being selected through a public audition. On the other hand, Sawakami is very critical of the commercialism that comes into
opera when productions are organized around, and promoted on the basis of, star singers. He wants the Festival operas to be appreciated as unified,
artistic wholes, the best of Italian art enjoyed with a corresponding appreciation of Japan’s own cultural heritage.

For the audience, top price seats are expensive, though certainly not excessively so by American or European standards. In any case, there are always
lower-priced seats and, on the day, standing places available for just ¥1,000, or about $8 – “ridiculously cheap” Sawakami says with
pride. Ticketholders get invited to some free events as well, including chamber music recitals. With just four paying performances in this year’s
Festival (there are plans for more in future Festivals), it is impossible not to conclude that the whole project relies very much on his philanthropy. And
as Sawakami talks about the future, it is clear he is less interested in attracting the sort of older, moneyed people who have traditionally supported
opera in Japan than he is in appealing to young people and children; he wants to “broaden the base” of opera in his country and he knows it has
to be affordable for that to happen.

Sawakami is personally very involved in the Festival. He does not just pay the bills. I suggest that after all this exposure to opera, and opera people, he
must have a favorite opera, or opera composer. He laughingly says no, explaining with a level of modesty rare even in Japan that he is “still fairly
amateur in terms of opera … I’m learning now.” His Festival is perhaps above all an invitation for others to learn too.