The twentieth century is represented only by Elektra, Turandot and Lulu. The opening weeks of the season offered a good picture
of the current state of the Metropolitan opera—wildly variable conducting, unimaginative productions and some great singing.

The season opened with a new production of Verdi’s Otello. Bartlett Sher’s production was set in the 19th century. For the
most part the costumes (Catherine Zuber) were dark. It’s fine to eliminate blackface for Otello, but there was nothing in his military uniform to set
him apart from any of the other men. Desdemona was a splash of color in a dark, almost monochromatic world. Es Devlin’s sets were comprised of a
series of brightly lit, sliding plexiglass panels that enabled fluid scene changes, but looked more like a set for science fiction than like Cyprus. Sher
attempted a quasi-cinematic approach. For instance, Act I moved from the shore to an outdoor tavern to the street to an unspecified locale for the love
duet. Unfortunately his blocking was uninteresting and the constant moving of the panels was distracting. Moving the cast effectively should have been the
priority. At the opening, the chorus merely lined up at the footlights. Otello entered from behind the chorus (where was he coming from?). The love duet
didn’t seem to be staged at all.

The highlight of the performance was the Desdemona of Bulgarian soprano Sonya Yoncheva, a beautiful woman with a lovely lyric voice and a strong stage
personality. This was a performance to rival the great Desdemonas of the past. The “Willow Song” and “Ave Maria” were the high
points of the evening. Unfortunately, Yoncheva offered the only first-rate singing. Otello is not a congenial role for Aleksandrs Antonenko. I have heard
him sing beautifully, most recently in La Fanciulla del West in Berlin, but Otello’s music took him out of his comfort zone. The
“Esultate” was more strained than exultant. Željko Lučić, the Met’s go-to baritone for heavy Verdi roles, is a pale shadow
of the great baritones of the past. He has neither the voice of a Warren, Milnes or MacNeil, nor the dramatic imagination of a Gobbi. Neither Antonenko nor
Lučić is much of an actor. Yannick Nezet-Seguin brought out every nuance of the score in a performance that was both powerful and transparent.
Only he, the Met orchestra and chorus and Yoncheva were top notch.

This season’s opening performance of Il Trovatore (David McVicar’s production), was the only performance I heard that could really
compare with rosy memories of the “Golden Age.” There wasn’t a weak link in the cast. Anna Netrebko’s Leonora brilliantly overcame
all the vocal challenges of the role—powerful chest voice, ravishing piano singing, even lyric line. The coloratura was a bit sloppy in the first act
cabaletta, but her singing of the long Act IV scene placed her with the great Leonoras of the past. At sixty-three, Dolora Zacick is still a thrilling
Azucena. Given the current paucity of Verdi tenors, Yonghoon Lee is a treasure. If he doesn’t erase memories of Bergonzi or Domingo, he sings the
role elegantly with an attractive voice and solid technique. His singing offered a refreshing change from the ugly noises recent Met Manricos have made.
He’s even good-looking. Dimitri Hvorostovsky, currently receiving treatment for a brain tumor, received a prolonged ovation at his entrance and after
a superbly sung “Il balen.” Conductor Marco Armiliato couldn’t decide whether to lead or to follow.

If Armiliato’s conducting was barely competent in Il Trovatore, it was disastrous in Anna Bolena, which seemed to go from slow to
slower. He was obviously following his singers throughout when they would have been helped by a stronger presence on the podium. This was a droopy
performance. Sondra Radvanovsky made lovely noises, but showed little temperament. Radvanovsky’s repeated use of diminuendi distorted the vocal line
and slowed down the performance. There was some fine singing, but everything seemed cautious. Taylor Stanton, the Percy at my performance (Stephen Costello
was ill), didn’t have the voice for the role. Ildar Abdrazakov’s canto wasn’t very bel. Only Jamie Barton’s Jane Seymour gave the
performance any vitality.

A lot of people love the old Franco Zeffirelli production of Turandot. This reviewer isn’t one of them. It decorates the opera rather
instead of offering an interpretation. All the movement is done by extras and dancers with the chorus sitting at the edge of the stage and the principals
parking and barking on a small platform center stage. The constant kitschy dancing gets tiresome. Turandot should be scary: the Met’s Turandot is just silly. For Met audiences who seem to prefer pageants to intelligent productions, the Zeffirelli Turandot is a favorite.
The first of many casts this season, conducted ably by Paolo Carignani, was another mixed bag. Marcelo Alvarez’s voice is a size or two too small for
Calaf, but he never forced. I was grateful that the performance was more bel canto than “can belto” even though his voice couldn’t always
cut through the massive ensembles and brassy orchestration. Hibla Gerzmava has a large, bright, evenly produced voice that doesn’t have the warmth
one expects from a Liu. Nonetheless, she offered the most effective singing of the evening. Christine Goerke seems to be the go-to dramatic soprano these
days, but she isn’t a great Turandot. It’s a distinctive voice, or should I say voices. The chest voice is powerful, but she thins out on top
where power is needed in this role. She had difficulty with the opening of “In Questa Reggia” and was at her best in the Franco Alfano love
duet.

The one Wagner offering this season is the old Otto Schenk production of Tannhauser conducted, as it was in 1977, by James Levine. Gunther
Schneider-Siemssen’s serviceable sets seem to have lost some of the subtle lighting and projections that were so impressive when the production was
first seen. Except for darker lighting, the Venusberg scene now looks like exactly the same as the hillside scene that follows. The hall of song is still
lovely in a very traditional way. For those of us who want intelligent productions that in some way interpret the libretto, this pageant is frustrating. Tannhauser presents an irreconcilable conflict of flesh and spirit. It cries out for some kind of directorial intervention. 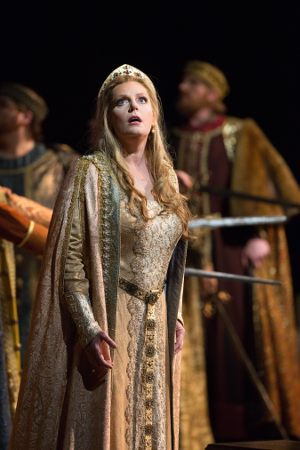 Johan Botha is the one contemporary singer who manages to sound as good at the end of Tannhauser as he does at the beginning. He’s not a
great actor, but vocally he conveys an understanding of this man who is neither happy in Venusberg nor in the prim court. Peter Mattei sang beautifully and
ardently—the best singing of the evening. The women were another matter. Michelle de Young’s Venus sounded shrewish rather then seductive. Eva
Maria Westbroek looked lovely and acted effectively, but she is now having some vocal problems. The top is no longer secure. The problem with the current
state of James Levine’s conducting is that one cannot help but measure it against his past. There was some beautiful playing from the Met orchestra,
but the prelude sounded tentative, the big ensembles cautious. Some tempi sounded odd. Given the current state of his health, it is something of an heroic
feat to conduct all of a Wagner opera. The question is whether he is doing himself any service to continue being Music Director of the Met at this stage of
his life and career. There were lots of empty seats at the first performance, which suggests that Levine’s Wagner is not the box office draw it once
was.

Five evenings at the Met in two weeks make one aware that the institution lacks artistic imagination. The choice of repertoire is unbalanced. Modern and
contemporary opera are neglected. Productions are usually lacking in interpretive intelligence. When one looks at who is singing at other American houses,
one sees that even the casting isn’t always the best it could be. We are stuck with that giant, somewhat alienating barn of a theatre, but the
institution is in desperate need of an infusion of creativity.