On October 8, 2015, Los Angeles Opera presented Missy Mazzoli and Royce Vavrek’s Song from the Uproar: The Lives and Deaths of Isabelle Eberhardt at REDCAT, the Roy and Edna Disney Cal Arts Theater in Walt Disney Concert Hall. The opera was part of L A O’s “Off Grand Program” which features chamber works in spaces smaller than the Dorothy Chandler Pavilion. Originally performed in 2012 at a Manhattan venue called The Kitchen, Song from the Uproar is Mazzoli’s first opera and a most promising work.
She based the scenario on the journals of Swiss-born Isabelle Eberhardt, which she stumbled upon in a Boston bookstore. Isabelle was an irrepressible free spirit who lived from 1877 to 1904. While other women of the Victorian Age were held captive by marriage and large families, Isabelle traveled North Africa, sometimes in male garb, free of the conventional behavior required of either European or North African women.
A unique person who forged her own path, Isabelle stayed true to her ideals through her short but fascinating life. During her seven years in Africa, she fell in love, was the victim of an assassination attempt, suffered betrayal by her lover, and lost her life in a desert flash flood. Luckily, some of the pages from her journals survived to let later readers know of her courageous life. 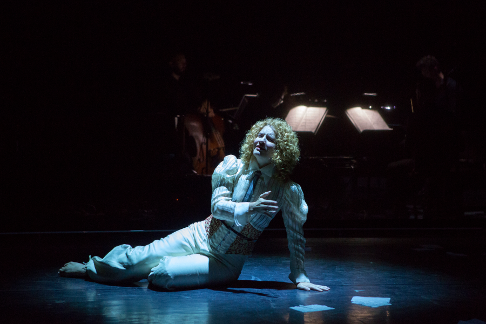 Abigail Fischer as Isabelle [Photo by Craig T Matthew]
Mazzoli and co-librettist Royce Vavrek told Isabelle’s story by combining live and pre-recorded music with original video by filmmaker Stephen Taylor whose images of the desert, desert dwellers, and flashes of light transported the audience to Isabelle’s world. Zane Pihlstrom’s sparse scenery and Alixandra Gage Englund’s simple but inventive costumes combined with S. Katy Tucker’s projections and Scott Bolman’s lighting to add to the ambience of turn-of-the-twentieth-century North Africa.
Mazzoli’s music is often subtle and luminous, and with less amplification we might have heard more of the score’s natural radiance. The piece itself is spellbinding and easily kept the audience’s attention for a little over an hour. Singing the role of Isabelle in the fifteen songs that comprise this work was mezzo-soprano Abigail Fischer. She has a luscious, creamy, somewhat vulnerable sound and the expressive ability to touch the hearts of the audience.
Sopranos Celine Mogielnicki and Amelia Watkins, mezzo Kate Maroney, tenor Tom·s Cruz, and baritone Wayne Arthur Paul assisted her with vocal harmony and added considerably to the piece’s visual interest with their renditions of Gia Forakis’s stylized dance. Accompanying the singers, the NOW Ensemble, led by Steven Osgood, consisted of Logan Coale, double bass; Mark Dancigers, electric guitar; Campbell MacDonald, clarinet and bass clarinet; Andrew Rehrig, flute and piccolo; and Michael Mizrahi, piano.
Produced by Beth Morrison Projects, the opera was part of L A O’s “Off Grand Program” which features chamber works in spaces smaller than the Dorothy Chandler Pavilion.
This work is quite different from the average opera performance and its unique qualities were a joy to experience. The last line of Song from the Uproar reads: “These hours are no more than moments of light in this blanket of blazing stars.” Perhaps they were no more, but most assuredly they were no less. I hope we will hear a great deal more from both Royce Vavrek and Missy Mazzoli.
Maria Nockin