Danielle de Niese and J’nai Bridges sing the diva Roxane Coss and the terrorist Carmen, Rafael Davila performs General Alfredo, Andrew Stenson is the translator Gen Watanabe, and Jeongcheol Cha takes the role of the Japanese magnate Katsumi Hosokawa. Anthony Roth Costanzo sings the young terrorist CÈsar, William Burden is RubÈn Iglesias, Vice President of Peru, Jacques Imbrailo performs the Red Cross representative Joachim Messner, and John Irvin sings the role of Christopf, accompanist to Ms. Coss. Davila, Stenson, Cha, Roth Costanzo, and Imbrailo make their Lyric Opera debuts in these performances. The production is directed by Kevin Newbury, with sets, costumes, and lighting designed by Davd Korins, Constance Hoffman, and Duane Schuler. Sir Andrew Davis conducts the Lyric Opera Orchestra and Michael Black has prepared the Lyric Opera Chorus.
The opening scene of the opera depicts, in Lima, Peru, the arrival of numerous guests into a ballroom with staircases leading upward at stage right and stage left. The extended welcome of invitees is accompanied by a variety of instrumental combinations highlighting brass and percussion, leading into woodwinds with a steady, rhythmic backdrop of strings. As a scrim previously covering the stage now ascends, the chorus of those gathered for the occasion begin to sing about Peru’s past and future. As part of this collective comment, references are made to Japan as Peru’s future, its promise, and the sun. The Vice President declares the occasion in honor of the visiting dignitary Hosokawa’s birthday. Mr. Burden applies appropriate vocal decorations to herald the importance of the evening – high pitches are succeeded by an undulating melisma on the line “a voice you hold dear to your heart.” Here the entrance of Roxane Coss is anticipated, a singer who is scheduled to perform in honor of Hosokawa’s birthday. Ms. de Niese, as the featured performer and draped in a glittering blue gown, appears and descends the staircase right; she begins to perform the soprano Coss’s aria written for the occasion. As she sings, “Long ago you were destined to come here,” de Niese’s voice rises and descends in a quasi-Straussian line. The dedicatee of the music is sufficiently moved so that Mr. Cha, as a smitten Hosokawa, rises almost unthinkingly to greet Coss while she descends the staircase. Although he cannot communicate, given linguistic limitations, the reach of music has spoken to his heart. De Niese begins to sing “Welcoming winds” as a fitting lead to the next stanza, when shots or an explosion can be heard. A group of terrorists bearing weapons enters with the demand to see the President. From this point to the end of Act I the scene remains static with however the opportunities developing for individual relationships and attempts at allied communication. Since the titular leader of the country is not in attendance, the terrorists declare the others to be hostages and refuse to leave until “the President hears us.” 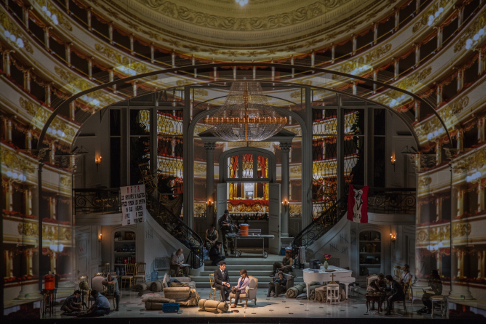 The external attempts to end the crisis peaceably – search lights and loudspeakers – and the internal tension resulting from the futile rescue are broken by the figure of Messner, representative of the Red Cross. In this role Imbrailo urges resolution to the captors with an extended vocal line [“I come to you in good faith”] and with securely placed emphases at distinct moments matching the text. Imbrailo summarizes his character’s frustration with the implacable mood of the terrorists, just as comic elements surface at times during the stand-off. As an example of this unpredictable tone, Ms. de Niese declares, in keeping with Roxane’s persona as diva, “This is so unnecessary!” In response, her captors state that they do not intend to give her “the pleasure of acting a death-scene.” Gradually individual characters begin to fall into place and the symmetry of two couples emerges. Hosokawa’s gestures of communication lead to a non-verbal, emotional proximity with Roxane, while his translator Gen is repeatedly distracted by a young soldier, who is eventually identified as Carmen and who wishes to be taught words. A swelling in orchestration and the line “Roots growing at my feet,” express the development of both couples falling in love.
As these private relationships burgeon, the confusing choice of possible evacuees from among the captives seethes in choral reflection. Despite his need for medication the accompanist Christopf, portrayed by Mr. Irvin with passionate loyalty, refuses to leave. The scene concludes with a quartet of the potential lovers musing on time, as “the hour rises into the air and vanishes.”
In the final scene of Act I the strands of previous music, political commitment, and emotion coalesce into a crisis. The captors have not achieved their demands yet refuse to yield to Messner’s advice to give themselves up. Instead Roxane is ordered to sing, the non-specific nature of her song summarized in “Forgive me if I wander from thought to thought, word to word!” Despite this statement, her singing causes general rapture; Hosokawa senses even greater attraction, and the soldier Carmen responds to the music, in turn enhancing the infatuation felt for her by Gen. A sudden interruption by the General accuses Roxane of attempting to “beguile them.” In reaction, the terrorists’ manifesto is declaimed with intricate verbal control gracing a complex orchestration. Although female prisoners are now allowed to leave, Roxane is detained as valuable; her devoted Christopf is killed while attempting to intercede. Music transforms into prayer, while Ms. Bridges’ Carmen delivers a touching oration in Quechua. The ultimate sentiment concludes the act with “There is no death, only a change of worlds.”

Central to Act II are aspects of time, memory, and music. In order to combat the atmosphere of tedium, games are played by both captors and captives. The descending fog, characteristic of the Peruvian climate, enhances the timeless march of days. Roxane’s lyric, “Between the past, between the present,” accompanied by spare strings and harp, renders inevitable the reaction to time, as it leaves aside the future. Messner continues to provide the only tangible link to the outside world; even though the female chorus of captives who have left continues to hold vigils, only Messner enters the building to continue his intermediary duties. Carmen’s prayer to Santa Rosa asks for guidance and leads her ultimately to Gen. During this sung prayer low pitches are matched with cello accompaniment, while Bridges’s top notes grow in intensity. Here the line, “open your eyes and come with me,” bears an emotionally rending pitch on “conmigo.”
Although Messner urges “Diplomacy is not a word, it is a vision,” he provides Roxane paradoxically with sheet music to alleviate this timelessness. The young CÈsar now isolates himself from the other terrorists and recalls his past and inspiration to sing “entre los ·rboles” [“among the trees’]. Mr. Roth Costanzo delivers a bravura performance, investing his memory of those earlier days in a natural setting with an exited trill. Pure top notes drift into a dream as he is overheard by Roxane. Young CÈsar’s musical talents are now encouraged by the diva, their practice sessions becoming part of the daily attempt to swallow time creatively. During one of these endless nights Hosokawa and Roxane, just as Gen and Carmen find themselves alone together. Each couple shares a willing intimacy, as “unseen this night … I get lost in your arms.” The awkwardness of their love is emphasized by the next morning’s game of soccer still being played to pass time. Roxane is about to provide a further lesson to CÈsar when the building is stormed and terrorists shot. Burden’s Iglesias cries out chillingly “No m·s sangre!” [“No more bloodshed!”], yet the swift resolution has already killed the “wrong three,” in the words of Roxane. CÈsar, Carmen, and Hosokawa have been shot by the government forces and now die as Roxane and Gen witness.
In her final aria Roxane comments on the painful conclusion of this human and emotional strain. Although she sings of the departed, she asks “how to sing in the language of the missing.” In her final, lyrically reassuring statement de Niese declares “I must move forward and ahead” with a climactic high note on the final word that seems to reach, finally, for the achievable future.
Salvatore Calomino