It is the brash, devil-may-care young Shostakovich (24 years old) who explodes in facile, brilliant music that sometimes may crash into the obvious but usually soars magnificently into the shimmering ethos of animal youth. Shostakovich’s music did indeed shine absolutely unfiltered through this sordid tale of desire in an ugly world.
At least this is the way director Dmitri Tcherniakov tells the story, making the Shostakovich score and conductor Kazushi Ono’s orchestra the protagonist of his staging, laying bare in 14 tableaux (the nine of the libretto plus the five musical interludes he staged as well) striking metaphors of this musical world, the mere facts of the libretto summarily sacrificed to the more powerful musical meanings of each of the scenes.
Tcherniakov boxed the nineteenth century world of an 1865 novel (‡ la Turgenev) of the libretto into the confines of a modern mechanized warehouse. Within the warehouse there was a love den box ‡ l’orientale, and finally a grim, prison cell box. The action was not a narrative. It was fourteen boxes exploding in sexual acts and in brutal violence (think strong lights flashing, blinding you to what you knew was going on). This when the scenes were not sarcastic comments on the czarist Russian past, and surely the Soviet present as well. 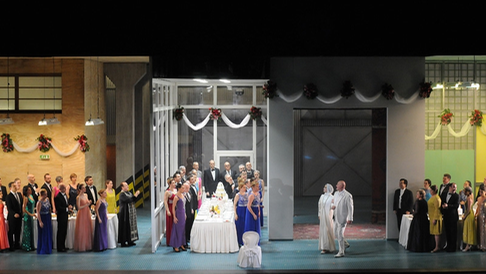 Tableau 8, the wedding
The bright acoustic of the OpÈra de Lyon favored its splendid resident orchestral resources for this piece, unabashedly unleashed by conductor Kazushi Ono in a precise reading of the score, of particular note the huge role of Shostakovich’s clarinets not to mention the shattering, unimaginably loud orchestral and percussion climaxes that made Stalin wince leading to the first official denunciation of Shostakovich.
It was three and one half hours of blatant musical eroticism and brutality laid bare by Tcherniakov. The missing atmospheres of the natural world and the human narrative of its book however made the evening seem very long and sometimes even painful.
Katerina Ismailova (aka Lady Macbeth) was Lithuanian soprano Ausrine Stundyte who has performed this huge role in the Calixto Bieito production at the Berlin Volksoper (the mind boggles imagining what this may have been). There had been whispers that San Francisco Opera was going to mount a Christopher Alden production — a project evidently sacrificed to SFO’s anti-opera business model. Ms. Stundyte gave a total performance, moving from the obvious frigidity imposed on her life to the heated passions of her murder of her rival in the riveting penultimate scene. Three police thugs then attacked and killed her in the maximally violent (think loud) final scene. 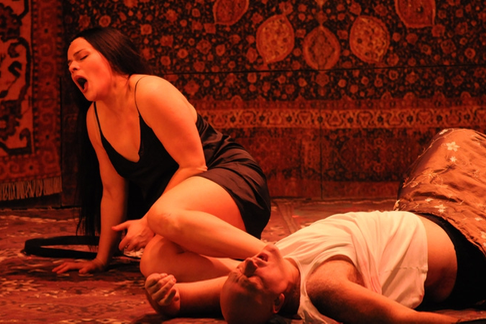