But, now that the tinsel has been returned to its box,
it’s time to replace firecrackers with fiery passions, and so the main stage
welcomes the seventh revival of Jonathan Kent’s 2006 Tosca (revival
director Andrew Sinclair), which picks up the verismo violence where Damiano
Michieleto’s Cav & Pag left off in December.

A ‘Welcome Note’ in the programme by Musical Director Antonio Pappano
and Director of Opera Kasper Holten caught my attention: ‘… what would I
not give to see and hear Tosca for the very first time — without
knowing how it will end!’ What of the reviewer who has seen a particular
production of this familiar opera several times, with singers returning to
reprise roles: what is there to experience afresh?

On this occasion the return of Angela Gheorghiu in the title role, which she
created in 2006 and has reprised several times since, offered instant
reassurance that this is a production that merits re-visiting and still has
lots to offer. From her first appearance in Act 1, Gheorghiu dominated the
stage, but through strength of characterisation — vocal and dramatic —
rather than any diva-ish mannerism or melodrama. The subtleties and nuances of
her interpretation were notable: it was as if she could flick through a
thesaurus of emotions and take her pick, by turns jealous, petulant, childish,
playful, flirtatious, innocent, vulnerable and impetuous — often in close
succession. Gheorghiu’s Tosca is beguilingly mischievous, as she teases
Cavaradossi; peevishly mistrustful, as she waspishly demands that the artist
re-paints the blue eyes of the figure in his fresco who so resembles her
‘rival’; understandably disgusted by Scarpia’s depraved advances. We
forgive her flaws, understand the violence of her self-defence, and fear for
her mental stability in the aftermath of murder. 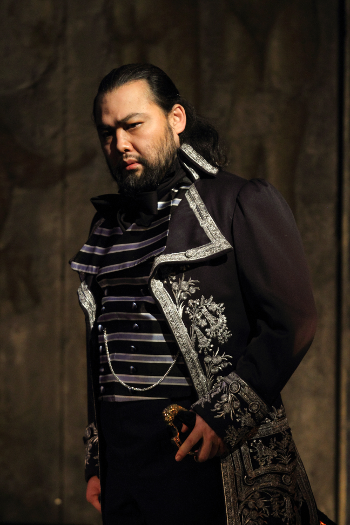 Gheorghiu’s voice may lack a little of its former glossiness and lustre,
but it is still a well-modulated instrument which she can manipulate at will,
seeming to hold back at times to make the moments of dramatic impact yet more
compelling. In Act 1 she began with slenderness and reticence, yet in her duet
with Cavaradossi a bloom shone forth, revealing the passion within her soul
while not, at this stage, giving it full voice. Lyricism gave way to tense
brightness in the final moments of the Act in the face of Scarpia’s evil
insinuations. She withheld during the interrogation scene in Act 2 which meant
that when the angry outburst did arrive, we were shocked by our realisation of
the passions within. The delicate thread which she spun at the start of
‘Vissi d’Arte’ confirmed her vulnerability, but she built to the soaring
climax with hypnotic emotional and vocal power.

While Gheorghiu’s Tosca was nuanced and three-dimensional, Korean baritone
Samuel Youn, in his debut at the House, was very much a ‘flat’ portrait of
‘evil’; he conveyed little sense of the sadist’s emotional complexity or
recognisable human emotions — or even of an unfathomable psychology such as
Iago’s ‘motiveless malignancy’. (After all, Scarpia himself does identify
with Shakespeare’s sinister schemer: ‘Iago had a handkerchief, and I a fan/
To drive a jealous lover to distraction!’)

Gheorghiu found herself in a similarly ‘cool’ partnership with her
beloved Cavaradossi, sung by the Italian tenor Riccardo Massi. Vocally Massi
was a good fit for the role: he seemed comfortable with the high-lying
passages, phrased cleanly and convincingly, and has a pleasing, if somewhat
characterless, tone. Initially a little hesitant in ‘Recondita armonia’, he
grew in confidence and ‘E lucevan le stelle’ was movingly anguished. But,
Massi’s acting, and vocal acting, is somewhat low-key, resulting in an
impression of youthful inexperience, even disengagement, that conveyed little
of Cavaradossi’s characteristic confident swagger; and Massi was never a
match for Tosca’s passionate persona. Though touching direct and tender in
their Act 1 duet, ‘Qual’occhio’, he was a long way from capturing the
‘erotic lyricism’ — termed ‘pornophony’ by one commentator. 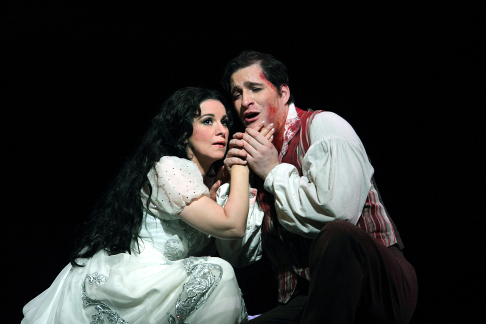 Angela Gheorghiu as Tosca and Riccardo Massi as Cavaradossi

The supporting roles were consistently excellent. Donald Maxwell fussed and
fretted as the Sacristan, his baritone strong and the diction clear. The
Australian tenor and former Royal Opera House Young Artist, Hubert Francis,
reprised his unpleasant and menacing Spoletta, while Ukrainian baritone Yuriy
Yurchuk — a current Jette Parker Young Artist — was especially
convincing as the anxious Angelotti, using his lovely tone to garner our
sympathy. Harry Fetherstonehaugh was a clear-voiced Shepherd Boy and the ROH
Chorus put great effort into a rousing Te Deum.

Director Jonathan Kent and his designer Paul Brown begin with realism and
shift gradually towards representation. The sets are extravagant and detailed.
In Act 1 we are in the crypt of the Church of Sant’Andrea della Valle, with
the High Altar visible above, behind an ornate, candle-adorned balustrade, and
Cavaradossi’s fresco stage-right, decked in scaffolding. The altar is reached
by means of a dual-staircase which encloses an outsized statue of the Virgin,
the latter concealing the door to the Attavanti Chapel. I found that I took
more note of the ecclesiastical comings and goings aloft on this occasion,
perhaps because I was seated in the Amphitheatre, and found the suggestion of
ongoing liturgical ritual as a backdrop to the tragic melodrama to be a
convincing one. I was rather perplexed, therefore, by one critic’s
observation that the set is for ‘some unfathomable reason, on split levels so
that characters have to scurry up and down stairs’ … the stairs in question
permitted further realistic touches, as when the Sacristan, making a hasty
descent, stumbled on his robes. Act 2 introduces some symbolism in the form of
the monstrous statue in Scarpia’s apartment at the Palazzo Farnese, an
intimidating mass which dominates and threatens; and the symbolic mode is
strengthened in the final Act, when a statue fragment hangs dauntingly over the
Castel Sant’Angelo.

I began by noting Gheorghiu’s superb performance but French conductor
Emmanuel Villaume was equally responsible for the excitement generated.
Privileged with a direct view down into the pit, I watched Villaume stir up an
immediate frisson in the opening bars, inspiring tremendously vigorous and
propulsive playing by the orchestra of the ROH. He used his left hand like a
whip which flashed to individual orchestra sections, demanding, and receiving,
a thrillingly alert response. Villaume was not afraid to conduct a little ahead
of his singers, confident that his urgent drive would impel them along. But,
there was sensuousness and suavity, too, and a gripping dramatic sweep. This
production (which is double cast) is worth seeing, however well you ‘know the
show’.