Britten wrote out the figured bass parts for these songs. Wearing a most attractive long gold dress, Barton opened with a stately rendition of Music for a While. Wagner chose a simple but elegant black gown. Together, they continued with the pensive Lost is My Quiet and the comical What can We Poor Females Do?
Wagner sang the second group, a Bellini Song Cycle consisting of: Il fervido desiderio (The Fervent Wish), Dolente Imagine di Fille Mia (Sorrowful Image of my Phyllis), and Vaga Luna che inargenti (Lovely Moon, Who Sheds Silver Light). She sang them with admirable bel canto phrasing, effective dramatic expression and a lovely tone. Jamie Barton returned with the seven Cig·nskÈ Melodie (Gypsy Songs) that Antonin Dvo?·k set to the poems of Adolf Heyduk. She scored a notable impression on the Tucson audience with the fourth, Kdyû mne star· matka zpÌvat u?Ìvala (Songs My Mother Taught Me). 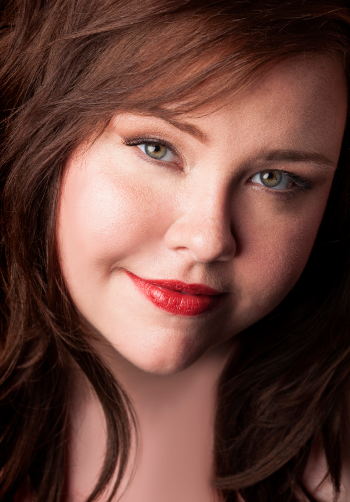 Jamie Barton [Photo by Rebecca Fay]
Amber Wagner came back with three well-known songs by Richard Strauss. Beim Schlafengehen (Falling Asleep), with lyrics by Hermann Hesse, is one of Strauss’s Four Last Songs. It was published in 1950, the year after his death. Sung by an artist with large creamy voice, listeners gave no thought to slumber as they relished the luxury of hearing such a beautiful voice in a small hall. Morgen (Tomorrow) has words by John Henry Mackay, who was partially of Scottish descent but brought up in Germany. The last of four songs, it was part of the composer’s wedding gift to his wife, Pauline. In 1885, Strauss composed Zueignung (Dedication or Devotion) to words by Austrian poet Hermann von Gilm as part of his first collection of songs. Wagner sang both with exquisite tone quality.
After a short intermission, the two singers returned with a rousing rendition of Giuseppe Verdi’s Aida and Amneris duet: “Fu la sorte dell’armi a’ tuoi funesta” (“Fortune Was Cruel to Your People”). Up to this point Barton had seemed much too agreeable to show a cruel streak but, as Amneris, she turned herself into an emotionally intense rival for the hand of the man both characters loved. Wagner was a poignant Aida.
At this point the program changed completely so that the singers could have some fun with songs they probably grew up with. In the program, they provided the text and translation for each of the classical selections, but they did not give their audience any notes on these later choices. Wagner offered Charles H. Gabriel’s 1905 His Eye is on the Sparrow, a work that won Mahalia Jackson a Grammy Award. Barton followed with the traditional Spiritual, Swing Low Sweet Chariot. Wagner then sang Harold Arlen and E.H. Harburg’s song Over the Rainbow originally sung by Judy Garland in The Wizard of Oz, and it was fun to hear the piece done as more than an encore.
Barton countered with a song that gladdened the heart of every strong singer who has ever been told to sing alto because someone had to keep weak singers on their assigned part. The Alto’s Lament with music by Zina Goldrich and a text by Marcy Heisler was thoroughly amusing and showed Barton’s gift for comedy. Their finale was a duet rendition of Irving Berlin’s Sisters, originally seen in the Bing Crosby film White Christmas. The two young singers chose an interesting program and gave the Tucson audience a most enjoyable evening’s entertainment.
Maria Nockin