The company continues its laudable dual mission to facilitate the
burgeoning careers of recently graduated young singers and to resurrect the
frivolous blend of the grotesque and the erotic, the preposterous and the
satirical, which characterises the world of operetta. But, the imposing
elegance of St John’s, with its corner towers, monumental pediments
and lofty spacious interior — scarlet curtain, dark timber gallery,
giant white Corinthian columns and barrel-vaulted roof — made an odd
backdrop for this madcap, and at times maniacal, journey with Orpheus and
the amoral Olympian deities to the Underworld, courtesy of Simon
Butteriss’s adaptation of Offenbach’s opera
bouffe.

The tale was swiftly told and the major numbers preserved, with several
of the operetta’s ‘supplementary numbers’ included in the
final Act — Styx’s ‘I was a King’, the ‘Fly
Duet’ for Eurydice and Jupiter, and the final ‘Hymn to
Bacchus’ for Eurydice and the Chorus — presumably to allow
further opportunity for comic excess. At times, though, the burlesque
veered dangerously close to pantomime farce. Offenbach’s satire is a
sophisticated parody on a revered Classical legend — a myth which
lies at the heart of the ‘birth of opera’ itself. A domestic
squabble between disenchanted lovers, the vulgar Eurydice and boorish
Orpheus, results in the latter reluctantly (coerced by Public Opinion)
heading down to Hades to seek out his wife who has run off with the
shepherd Aristaeus (the disguised, lecherous Pluto). This barbed ridicule
combines with sharp mockery of the wooden performances of Classical drama
at the Comédie-Française in Offenbach’s
contemporary Paris, and biting critique of the social and political
scandals of the Second French Empire. It’s a work which needs charm
and elegance to counter the buffoonery, qualities which Butteriss and
movement director Lauren Zolezzi rather overlooked in favour of zany
horseplay. 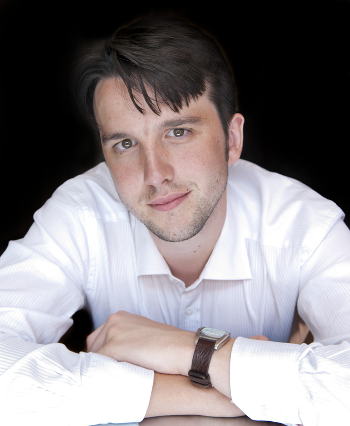 Butteriss wore many hats in preparing and performing this production: in
addition to directing the young cast, he penned the expeditious spoken
dialogue, adapted some of the lyrics (J.R. Planché’s translation
was used), served as a smooth-tongued narrator, sang the role of Jupiter
with stylish verve, and imitated a bluebottle. An experienced ‘man of
the theatre’ — director, translator, actor and presenter,
singer — he was a relaxed and debonair presence amid the comic
antics, swapping evening-dress for silk dressing-gown, then sporting black
tights and outsized visor to impersonate a buzzing insect. Occasionally
Butteriss strayed a bit too close to the camp territory of Kenneth Williams
or John Inman, but he judiciously held back; a wicked sense of fun was
tempered by the wisdom of experience.

Among the cast, sopranos Emily Vine and Hannah Sawle stood out. As a
soubrettish Eurydice, Vine span a beautiful line and had no trouble hitting
the highs, while looking equally classy in Greek tunic and sparkling
evening gown. Sawle sang with impressive focus and bright tone, as the
categorically unchaste Diana, and was a strong presence in the
ensembles. William Morgan proved that his fingers are as nimble as his
vocal chords, giving a creditable — if rather hasty — rendition
of the overture’s renowned violin solo; despite his musical
acrobatics — he twirled impetuously around the haughty Eurydice and
slid along the floor on his back, with no obvious negative effect on
intonation or finger-work — Orpheus was unable to impress his
indifferent wife. But, the multi-tasking — and the overly boisterous
characterisation — did somewhat diminish the refinement of his vocal
delivery.

Mezzo-soprano Kathy Steffan quietened the agitation as a prim Juno and
the pompous Public Opinion, and revealed a wide vocal range and sure
intonation. As John Styx, attired in a fluffy, grey onesie — a sort
of one-headed Cerberus in a jumpsuit — Matthew Buswell demonstrated
richness and variety of tone but his tuning was less secure. Tenor Tristan
Stocks gambolled manically as Mercury, but couldn’t quite get his
tongue around the rapid patter of his aria. In contrast, Jan
Capinski’s diction was excellent; he was a stentorian Pluto/Aristaeus
and a persuasive stage presence, particularly in the ensembles, where there
was not a hint of the uncertainty about the text which seemed to afflict
one or two of his colleagues on occasion. Felicity Buckland completed the
cast as a charming Cupid.

Conductor Oliver Gooch led the excellent Orpheus Sinfonia. There was
much sensitive string playing and clarinettists Rosemary Taylor and Joseph
Shiner added a smooth suavity, a soothing counterpart to the hectic
activity on stage (which was deftly choreographed by Zolezzi). The
energetic contribution of percussionist Timothy Evans did much to swell the
sound, adding excitement and verve at the climactic moments. Gooch swept
proceedings along and took the singers with him, although at times the
tempo seemed to run away with itself — the ‘Can Can’ went
at such a lick that the cast struggled to deliver their high kicks.

Opera Danube’s ambitions are certainly praiseworthy, and artistic
director Andrew Dickinson, who welcomed us to this matinee performance,
deserves commendation for his aim to ‘showcase’ the work of
gifted young professionals through performances of operettas which have the
‘fizz and exuberant quality … so suited to the ambition of
emerging talent’. All the more so because it’s all done on a
shoe-string. This was a performance of irrepressible vivacity and jollity;
just the thing for a Sunday afternoon in dreary January, even if the froth
and bubbles did overflow.