The story is set in Scotland, where, Ariosto tells us, ‘any woman who
engages in union with a man and is not his wife, must be put to death’. In this
production, which opened the 2016 London Handel Festival at the Royal College
of Music, director James Bonas seemed to travel even further north: there was
an Icelandic vibe to the dim hues of cool blue, dull grey and grungy brown of
the set and costumes — a monochrome palette and barren ruggedness which
reminded me of the violent setting of Orson Welles’ Macbeth. The
cast’s distressed combat fatigues and dreadlocks, together with the
Scottish King’s pseudo-Arthurian vulnerability, evoked a dystopian
hinterland which might be past or future. The bare set enhanced the
timelessness: broken branches were suspended aloft, a resolute stump doggedly
persisted. In the final act, a purgation by water as effected — not
without risk of mishap. Beige curtains swished to and fro across the stage,
inferring the passing of time or physical dislocation, but regrettably in noisy
fashion. Darkness embraced all — even, at times, the singers, who
disappeared into the dim recesses of the subdued stage.

The arias themselves were not encumbered by excessive direction; the singers
were encouraged to use the music to communicate rather than indulge in
superfluous gesture. The result was directness and a pleasing lack of
fussiness.

As the eponymous prince, Kate Coventry worked hard — and with
considerable success — to communicate the varied stages of
Ariodante’s emotional journey. In the opening act, she conveyed the joy
and serenity which springs from our hero’s confidence in Ginevra’s
love and his delight at the bestowal of the King’s favour (‘Con
l’ali di constanza’) singing with clear, fresh tone and dancing
with bright vitality through the intricate melismas. She had staying power too:
‘Scherza infida’ was a bitter explosion of grief, which suggested
the destabilising anger which follows his beloved’s perfidy. 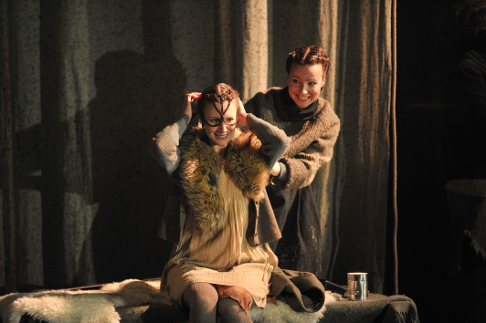 As was the case with all the impressive cast, Coventry seemed to have little
difficulty with the virtuosic demands of her role: ‘Dopo notte’ was
gleefully florid, racing through the three-octave compass and powerfully
conveying Ariodante’s almost supra-human ecstasy when he learns that his
beloved is irreproachable after all. The part of the hero knight was originally
written for Carestini, renowned for his agility and stamina; Coventry suggested
that she’d have been more than a match.

Sofia Larsson’s Ginevra was impassioned and full of heart;
occasionally the sound was a tad sharp-edged and her intonation took a little
time to settle, but when she got into her stride we enjoyed dramatic changes of
colour. Her lament of despair, ‘Il mio crudel’, was particularly
affecting. Coventry’s and Larsson’s voices blended well in the
three duets which Handel provides.

Galina Averina sang and acted well as Dalinda: she was foolishly gullible
but her naivety and regret won our forgiveness. Averina has a piercing shine at
the top and sleekness throughout the range; her virtuosic cascades were
impeccably even and smooth. As the evil Polinesso, Elspeth Marrow exhibited the
seductive allure of an Iago; although the part seemed to lie a little too low
for her, she sang with a rich warmth and smoothness which, ironically,
simultaneously belied and embodied the villainy and lustfulness of the cruel
and ambitious reprobate.

Paul Aisher demonstrated an appealing tone and firm line as Lurcanio,
although he had a tendency to shout in the more impassioned outbursts. Simphiwe
Simon Shibambu was more restrained as an introspective King of unwaveringly
regal bearing, but his well-focused, beguiling bass is an instrument of great
beauty and Shibambu used it with thoughtful musicality to convey the
monarch’s pensive dignity. Tenor Joel Williams sang with rich tone in the
role of Odoardo.

Laurence Cummings urged the proceedings onwards at a brisk lick — at
times too precipitously, I felt; while dramatic intensity accrued as the
recitatives tumbled hastily onwards, the undue hurriedness meant that there was
a lack of opportunity to absorb the sentiments of the preceding aria before we
fell headlong into the next one. The playing of the London Handel Orchestra was
vigorous and strong — perhaps the continuo was a little too
present in the recitatives — and there were some well-phrased obbligato
contributions from oboe and bassoon. However, I felt that, with greater
spaciousness, the cast might have been able to show more sensitivity to the
text’s emotional weight. While the performances offered much to admire
— not least pinpoint accuracy from some of these young singers in the
demanding coloratura — there was at times a certain ‘thrill’
lacking.

Handel’s Berenice will be performed on 17 March, in St.
George’s Hanover Square; it will be followed by the pasticcio
Elpidia , at the same venue, on 31 March. For further details see
http://www.london-handel-festival.com/