The performance of Don Giovanni on Saturday February 27, 2016, simply bubbled with Mozart’s melodic and harmonic invention as the orchestra provided a firm foundation for the excellent performances of Arizona Opera’s cast under Steven White’s caring but firm conducting. Leading with authoritative tempi, he drew luxurious tone and refined phrasing from the Arizona Opera Orchestra.
Tara Faircloth’s stage direction was realistic and gave the visual aspects of the performance a firm foundation. Peter Nolle and Douglas Provost’s functional sets allowed the singers to bring the libretto to life in all its glory while Kathleen Trott’s carefully researched, exquisitely detailed costumes placed the action firmly in eighteenth century Spain. 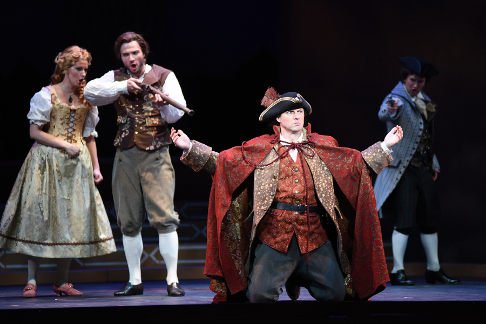 Alyssa Martin, Ryan Kuster, Matthew Burns and Andrew Penning as Zerlina, Masetto, Leporello and Don Ottavio
As Don Giovanni, Joseph Lattanzi was a delight both vocally and dramatically. His portrayal was entirely sympathetic and oriented towards the work’s tragic overtones and its eventual outcome. Although Lattanzi’s voice is not large and he reserved his full power for the supper scene, he achieved a high plane of vocalism and dramatic purpose whenever he was onstage. Matthew Burns was a cunning Leporello whose comedic turns were both pointed and deliciously amusing.
Alyssa Martin was a charming Zerlina who sang with a sweet sound. A smooth Ottavio, Andrew Penning sang a well articulated “Il mio tesoro” and made a fine partner for Andrea Shokery’s dramatically eloquent and musically exquisite Donna Anna. Ryan Kuster made a telling contribution as Masetto. His interpretation reminded us that revolution was on its way and would eventually change the relationship between common people and the nobility. 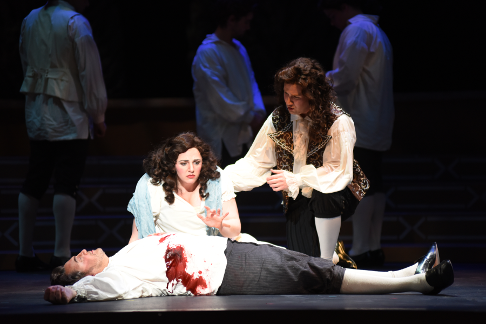