In a letter to Mathilde Wesendonck, Richard Wagner writes about Tristan
und Isolde: “I would call my art….the art of transformation. The
masterful point in this work is certainly the great scene of the second
act”. This sums up Mariusz Treliński’s technically mind
blowing Tristan und Isolde. The stage in the first act transforms
through highly complex engineering, while the second act was one of the most
dazzling, Romantic opera settings I have witnessed. With Simon Rattle at the
helm of his Berliner Philharmoniker, the performance resulted in a
superlatively transformative experience; however much exhausting in Act III,
you would not want to miss it for the world. And with the Herculean Eva-Maria
Westbroek as Isolde, the performance in Baden-Baden became an unforgettable
memory. 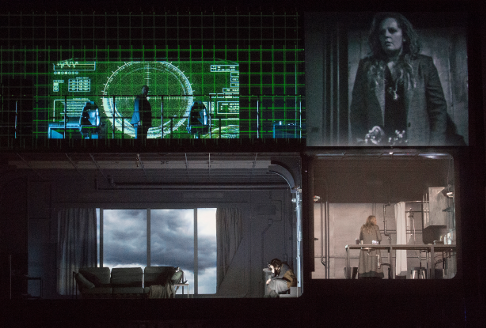 Video projections of a ship at sea during a storm complemented the
Prelude in its metaphor for Tristan and Isolde’s tempestuous
emotions. At the same time, that ship could have been Captain Rattle’s
Berliner. From the opening, the BPO played with astounding intensity. I
immediately realised I was in for a very privileged journey. 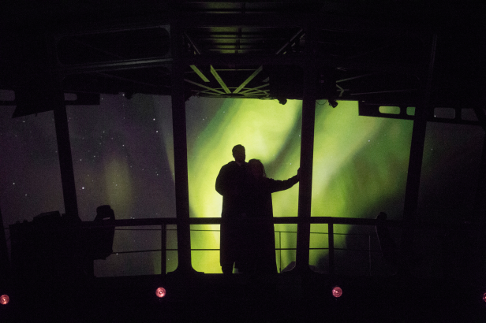 As the first act opens, we see a highly complex staging of a military naval
vessel. Dark metallic colours dominate. What little light there is, reflects
into the audience. The set by Boris Kudlička and Marc Heinz’s
lighting impressed as through complex engineering the stage switched its focus:
covering three floors, the deck, the stairwell, the Captain’s
quarter’s below, and Isolde’s room at the centre.

The stage functioned like a comic book panel that was each time covered and
lit from different angles. Through spy footage, Bartek Macias’s videos of
Isolde from different angles projected her on the ever changing stage. Although
it sounds like too much, this might be true in the end, but for now the
energetic dynamics on stage enthralled.

From the bat Ms. Westbroek dazzled dominating the stage: her voice full of
violent distrust, as Treliński makes his Isolde a femme fatale before she
has fallen in love. The Dutch Diva convinced both in that capacity, as well
later as the enamored Isolde later, when her vibrato conquered all. 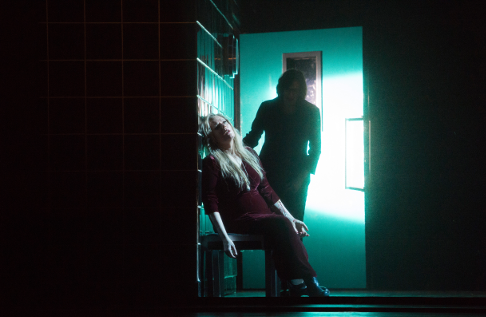 In Act I, dressed in black, she smokes, drinks, and even slaps Melot, played
deviously by Roman Sadnik. Sarah Connolly transformed for Braegene into a
persuasive secretary (spectacles and all) highly involved, with a dark but
affectionate tone that contrasted Ms. Westbroek in the best of ways. Together
they created a sound to behold.

The second act was one of the most memorable opera moments I have had. On
stage we see the ship‘s wheelhouse that throughout rotates as the action
takes place, eventually establishing the setting for the love duet. But for the
Northern Lights morphing around behind the two lovers, all is darkness. The
flux of those green lights certainly symbolized the transformative nature of
this experience and gave this production a feeling cosmic grandeur.

As Tristan and Isolde breathed in darkness with the Northern Lights in the
background, the Berliner’s music gained the foreground and Skelton and
Westbroek launched into a captivating “O sink hernieder, Nacht der
Liebe”. While Mr Skelton never reached the voluminous vocal heights of
Ms. Westbroek, he compensated with authentic sensitivity, including even some
glass eyed moments. I imagine Wagner would have loved to witness such indulgent
and thoughtfully atmospheric moods for his Gesamtkunstwerk.

Each excessively budgeted production reaches a tipping point. At some point
it all becomes too much to absorb. Here it occurred in the final act, when
everything turns strangely static. The glaring metallic reflections tortured
the audience’s vista; as if trying to keep you awake, but with agitating
results.

A sullen ambience emerged and a lone hospital bed made for Kurnewal and
Tristan’s interaction. As a brotherly Kurnewal, Michael Nagy commanded
the stage, even vocally upstaging Mr. Skelton. Still no matter the musical
excellence, a nagging dread permeated the first part of the third act.

With the memory of young Tristan in a broken down home in a projection of a
forest, Treliński’s applied psychology felt unnecessary and the
video excessively taxed the experience of the third act. Perhaps he wanted to
slow down the momentum before Isolde’s Liebestod, but the pause
in momentum made it quickly clear how consuming the first two acts had already
been.

When she returned, Eva-Maria impressively reignited the musical momentum.
For “Das Wiedersehen” she stormed onto the stage creating such an
impetus with her electrifying voice. Even more impressively, she brought back
the preceding intoxication. Her “Liebestod” closed the evening with
such persuasive power, leaving me exhausted, drained, but profoundly changed by
the overall experience.

The audience responded with a mighty applause and bravas for Ms Westbroek
and Sir Simon, while expected boos met Treliński and his team (this is
Tristan und Isolde after all). The staging ended up a bit too
extravagant with all its excessive sensory stimulation, but the rendition was
superlative in its musical execution. This co-production with Shanghai and
Warsaw opera houses, opens the Met’s new season in September…also with
Simon Rattle at the helm.