On May 7, 2016, San Diego Opera presented the West Coast premiere of Great Scott, an opera by Terrence McNally and Jake Heggie. The Dallas Opera had given the piece a star-studded world premiere on October 30 of the previous year. Heggie is best known for Deadman Walking, which premiered in 2000, and Moby-Dick, first seen in 2010. Unlike its predecessors, Great Scott is a comedy, not just an amusing work, either, but a rollicking belly laugh-inspiring comedy.
McNally’s original libretto pokes fun at everything from football to bel canto period opera. It includes snippets of nineteenth century tunes as well as Heggie’s own bel canto writing. He writes great faux Rossini. One of the most often quoted passages is the beginning of “Ah, non giunge uman pensiero” (“O, inconceivable thought”), the cabaletta or last section of “Ah, non credea mirarti” (“I didn’t believe I would see you”), the most important soprano aria in Bellini’s La sonambula (The Sleepwalker).
The opera opens on a rehearsal of the bel canto opera-within-an-opera, Rosa Dolorosa, figlia di Pompei, which had been composed in 1835, but never performed. Great diva Arden Scott, sung by Kate Aldrich, will portray the title role in a performance at the diva’s hometown opera company and she tells the company how she discovered the long-lost manuscript. Aldrich sang her long and difficult role with golden bel canto tones when they were called for and with dramatic emphasis when that was appropriate. 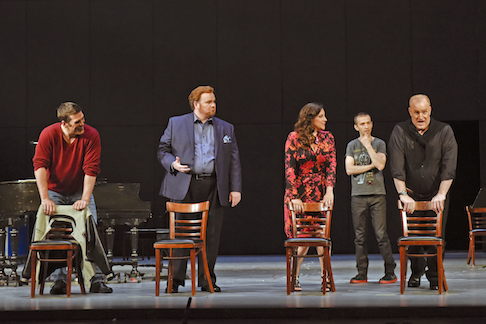 (Left to right) Michael Mayes is Wendell Swann, Garrett Sorenson is Anthony Candolino, Joyce El-Khoury is Tatyana Bakst, Anthony Roth Costanzo is Roane Heckle, and Philip Skinner is Eric Gold
Traveling with Arden is a young and brash but tremendously talented Eastern European soprano, Tatyana Bakst. Played to the hilt by Joyce El-Khoury, her “variations” on the National Anthem at the beginning of Act II brought the house down. Later, when Sid Taylor, portrayed by Nathan Gunn, comes in to pick up his son who is in the opera, he and Arden, who has once been lovers, sing of their different life styles.
Arden’s one-time piano teacher, Winnie Flato, sung by Frederica von Stade, is sponsoring the show that local performing company, American Opera, is relying upon to put its finances in the black. She is also concerned about her husband’s football team, The Grizzlies, which hopes to win the Superbowl on the same night the opera opens. The team’s financial position is as perilous as that of American Opera. Thus, football lovers and opera lovers have something in common. A singer many of us remember as Cinderella, Cherubino, and Octavian, von Stade is as charming as ever and still has that special sound in her voice that appeals directly to the listener’s emotions.
Conductor Eric Gold, sung authoritatively by Philip Skinner, is surprised by Stage Director Roane Heckel’s personal interest and here the plot adds a few extra strands that have to be tied up later. Dulcet-voiced counter tenor Anthony Roth Costanzo, one of the few cast members who appeared in Dallas and San Diego, sang Roane with bell-like tones while acting the part of a very recognizable stage director. He is a gem and I hope we will soon hear him again in San Diego. Garrett Sorenson as Anthony Candolino and Michael Mayes as Wendell Swann rounded out the cast as a tenor and a baritone who manage to impress Winnie for the future. 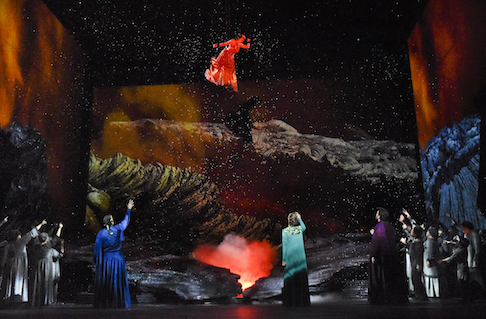 A scene from Rosa Dolorosa, Figlia di Pompei the opera within the opera Great Scott
Jack O’Brien’s stage direction was totally realistic and thoroughly amusing. Bob Crowley’s diva costumes were spectacular for both Arden and Tatyana. His outfits for Winnie were amusing and eye-catching and his costuming for the other characters was always appropriate for the time and place. Crowley’s scenery and Elaine J. McCarthy’s projections put Tatyana in front of an American flag for the football game and allowed Arden to sing Rosa’s final scene before a monumental version of Vesuvius. Both stage pictures worked amazingly well, but I did wonder why it took so long to lower Rosa’s sacrificial alter ego into the caldera.
Choreographer John de los Santos gave us interesting dances and Chorus Master Charles Prestinari’s singers sang in exquisite harmony while letting us understand the words. Maestro Joseph Mechavich brought out the San Diego Symphony Orchestra’s ability to play the music of both bel canto and twenty-first century opera with consummate skill. This was a wonderful night at San Diego Opera and a most auspicious rendition of a fabulous new opera.
Maria Nockin