But, the opera’s comedy derives not from the abstract but from the human: specifically, the reality of human interactions and relationships in everyday situations. Comedy must be rooted in the ‘real’ so that it does not descend into farce or irrelevance. Arden’s production for Glyndebourne – the Festival’s first new production of the opera for 35 years – is less concerned with exploring these human situations from within and more focused on imposing motifs and images from without.
The set is stylised and non-naturalistic but the Spanish locale is indicated by the painterly Moorish blue and white decorative azulejos, their hexagonal geometrics picked out by James Farncombe’s magical lighting, and by the flamenco guitars and frocks. The period is non-specific but Almaviva’s Elvis quiff and Rosina’s Balenciaga-inspired dress allude to the 1940s and ’50s. Rosina’s bedroom is a carelessly strewn pile of plump pillows. A decorative bureau and some anaemic bookcases, one shelf supporting a snoozing servant, hint at specific locations within Dr Bartolo’s house, but it is not a ‘home’ in which real people might dwell. 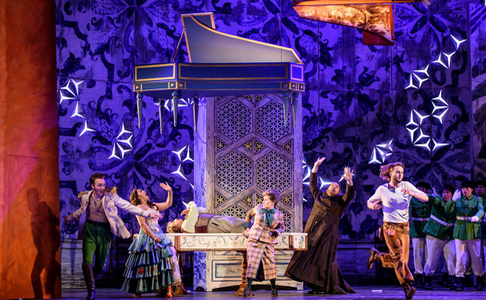 Act I finale
Indeed, it seems as if Bartolo is only just moving it, for in Act 2 we find him enjoying a boozy picnic on the floor of his own library. Furniture removers trundle back and forth with a harpsichord – an aimless conveyance which is greatly distracting during Bartolo’s ‘A un dottor della mia sorte’, and a real pity when that aria is being sung by one of the best exponents of the role. And, the Act 1 finale descends into a visual charade of surreal images: ‘Fredda ed immobile, come una statua’ is accompanied by the arrhythmic, ‘Keystone-Cops’ jerks and salutes of the Officers of the Watch, as upside-down harpsichords descend from the ceiling. We might have wandered into a painting by Magritte or Dali. Arden has experience of physical theatre with Complicite, which may account for the emphasis that she puts on ‘movement’. And, she admits, ‘This kind of music I find very visual, with a sort of extraordinary rhythmic painting’ – but the images that she conjures at times have little to do with what is going on in the drama.
Act 1 starts promisingly, though. A beautiful trellised balcony hangs mid-set, a square pendant, garlanded with red roses which tumble down like the tresses of a fairy-tale princess. Fiorello (a personable Huw Montague Rendall) settles his guitar-bearing band of would-be serenaders beneath Rosina’s balcony, to wait for the arrival of the love-struck Almaviva. When the silver-cloaked Count does appear, some supernumeraries – who seem to have been borrowed from the commedia dell’arte – provide fun and games, re-enacting a bull-fight and conjuring some sleight of hand to create a conveyor-belt of chairs to transport Almaviva to the foot of the balcony. And, there’s a neat joke when conductor Enrique Mazzola ‘auditions’ the guitarists for the role of accompanist to ‘Ecco ridente’.
But, by Scene 2 the momentum has waned. Danielle de Niese may have charged about like a hyperactive teenager, arms horizontal like a zooming airplane, but for all Arden’s professed concern with movement – ‘When you find the movement of a thing, a tree or stone or whatever, it expresses something about its essence’ – for the most part the characters are seriously under-directed and resort to standing stock still at the front of the stage and singing directly to the audience. Lindoro’s ‘disguise-scenes’, usually the core of the comic capers, were woefully underplayed.
There is some witty banter between stage and pit, and a few knowing winks, as when Bartolo is jolted from sleep by our applause for ‘Contro un cor’, and leaps conceitedly to his feet to accept our adulation for himself. But, such tongue-in-cheek breaking through the fourth wall only deepens the artificiality and diminishes the opera’s ability to convey human insights still further. Act 2 regains some of the opening’s tautness – though the storm in Act 2 was rather a damp squib, especially when compared to the monsoon that deluged picnickers during the long dinner interval! – but the production never quite recovers from this lull in the centre. 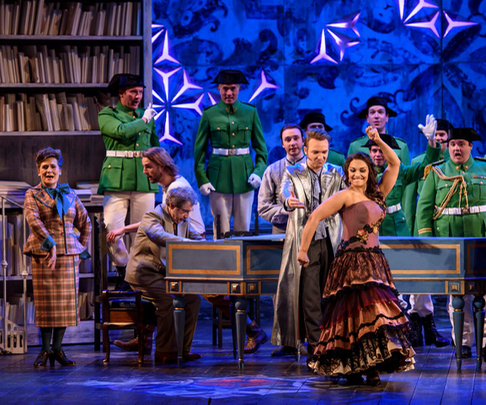 Fortunately, the talents of the cast distract us when the drama loses its way. Bjˆrn B¸rger’s ebullient Figaro is a man who pops up everywhere, and when you least expect – springing up in the pit before a confident, bright ‘Largo al factotum’; startling the prone Rosina by emerging through a trapdoor beneath her heaps of cushions; sneaking out from behind the bureau or climbing over the bookcase. Confident rather than swaggering, B¸rger’s Figaro is an appealing blend of mischief and magnanimity: a jack-of-all-trades – barber, hairdresser, surgeon, herbalist, apothecary, veterinarian, he is happy to help, especially if his services are well-rewarded, and cheeky enough to steal a kiss from Rosina and earn nothing harsher than an indulgent smile.
As the Count, Taylor Stayton has a tendency to push a bit hard at the phrase-ends and melodic peaks, but his tenor has a lovely ring and if his coloratura is less than precise at times, then he negotiates the role’s demands with style. Stayton loses the virtuosic ‘Cessa di pi˘ resistere’ but Danielle de Niese’s Rosina is granted ‘Ah, s’Ë ver, in tal momento’ before the storm scene, which she sings rather indifferently and which slows down the action. That number aside, de Niese exhibits a lovely, natural ease in the lower register and crystal-clear diction, though at the top there’s a hard-edge to the tone. She throws herself into the part with physical exuberance, somersaulting onto her cushions, striding over the harpsichord and sparkling dramatically as well as vocally.
For Alessandro Corbelli, performing the role of Dr Bartolo must feel as effortless as putting on his slippers and sipping a night-cap: but, however familiar it all feels, the baritone doesn’t let a detail pass him by, and – as far as Arden’s direction allows – gives a masterclass in comic nuance, balancing understatement with hyperbole, with spot-on timing.
His Act 1 scene with Basilio made less impact than usual, though, largely because – despite revealing a lovely smooth bass – Christophoros Stamboglis under-characterised the role and passed by opportunities for pointed irony. The only ‘memorable’ feature of ‘La Calunnia’ was the smoke that wafted from the music-master’s cassock, which presumably was designed to signify the earthquake or storm that would arise from Bartolo’s rumour-mongering and which would hound the Count out of town. Stamboglis was more secure, musically and dramatically, in Act 2, happy to trade constancy for currency when offered the plenitudes of Almaviva’s pocket.
Janis Kelly showed that her Miss Marple-spinster’s outfit hid a rampant vivaciousness, and stole the show with Berta’s lament for missed romantic chances, ‘Il Vecchiotto Cerca Moglie’.
The London Philharmonic Orchestra fizzed and dazzled under conductor Enrique Mazzola. All in all, this is an enjoyable production with rich pickings both visually and vocally. If only the beautiful designs served the rich, human comedy.
Claire Seymour