Oedipe had a long gestation – partly because the composer’s draft manuscripts were lost when they were sent to Moscow in a consignment of crates during the German offensive in Romania in 1917. Inspired by a performance at the ComÈdie FranÁaise in 1909 of Oedipus Tyrannus, by 1922 the opera’s vocal score was prepared; the finishing touches had been applied by 1931, and the opera reached the Paris OpÈra stage in March 1936.
Librettist Edmond Fleg ignored the theatrical experimentations of his day – expressionism, constructivism, symbolism – and told the story straight. He also disregarded Aristotelian unities of time, place and action, and traced the eponymous hero’s life from birth to death in the manner of a Victorian Bildungsroman, drawing on both Oedipus Tyrannus and Oedipus at Colonus – and also responding to inferences in Homer and Seneca – to re-construct the pre-history of Sophocles’ play. The libretto also emphasizes the parallels between the Greek myth and Christianity – the story of Abraham and Isaac, the Nativity, the Flight into Egypt: Fleg’s Oedipus is both universal and Messianic.
Fleg had originally envisaged a Ring-like drama spread over two evenings but Enescu advised, ‘do what the best chefs do. Put it back on the stove and let it reduce’. There are six scenes grouped into four Acts. The first serves as a Prologue in which we learn of the birth of Oedipus and TirÈsias’s prophecy that the child will kill his father, King LaÔos of Thebes, and marry his mother, Queen Jocaste. Terrified, the monarchs order the Shepherd to take the baby to the Cithaeron Gorge where he will die of exposure, but the Shepherd gives the child to Phorbas who in turn exchanges him with the dead son of King Polybos and Queen MÈrope of Corinth. The final Act is an Epilogue in which we see the aged king, attended in his last days by the faithful Antigone. These outer Acts frame the tragic drama.
Now a young man, when leaving Corinth Oedipus hears of his destiny; an angry encounter with LaÔos results in the latter’s death. Oedipus then becomes a hero to the Thebans when, solving the Sphinx’s riddle, he saves them from its murderous clutches; in reward they offer him their kingdom, and the widowed Jocaste as a bride. Twenty years pass and Thebes is struck by a terrible plague which the Oracle declares will continue until LaÔos’s assassin is punished. When TirÈsias reveals the truth of Oedipus’s identity, the king confesses his guilt, blinds himself in atonement and leaves Thebes, accompanied by his daughter, Antigone. 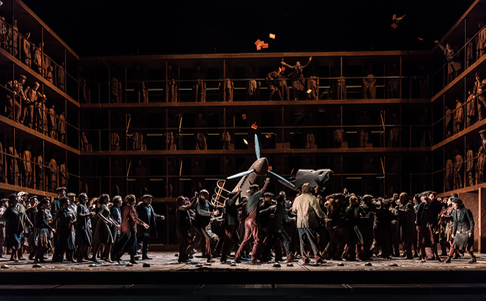 Production by ¿lex OllÈ (La Fura Dels Baus) and Valentina Carrasco with set designer Alfons Flores and costume designer Lluc Castells
This production interweaves the timelessness of the myth with historical specificity, the latter in effect underpinning the former. Alfons Flores’s designs evoke both the cultural glories of the classical past – tiered galleries and statuary – and the destruction and disasters, manmade and natural, of the modern age. Baroque archways are juxtaposed with WWII fighter planes; the ubiquitous clay-coloured palette suggests both ancient pottery and a world ravaged by toxic devastation. In fact, OllÈ explains that this visual scheme was inspired by a catastrophic chemical spill in 2010 which saw one million cubic meters of corrosive waste dumped on western Hungary: ‘that mud […] in our minds was also linked with the myth of man’s creation from primeval clay [and] symbolizes the plague that devastates Thebes, and is also the means by which the contagion spreads’.
Lluc Castells’s costumes reference contemporary combat fatigues while Peter van Praet’s lighting design keeps the world in shadow. Indeed, one might be forgiven for deducing that the opera’s message is, ‘we all live in a twilight zone’. The murkiness also obscures some of the set’s copious detail, and the unalleviated gloom is a bit wearying, although it does make the coup de theatre of the closing moments all the more powerful. 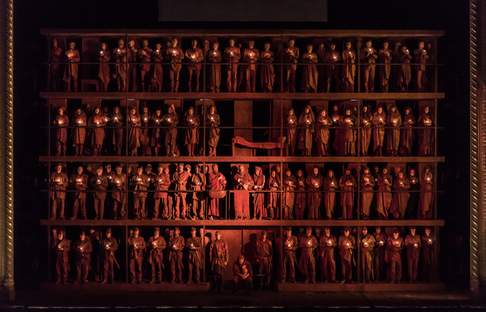