But, the violence is no veneer and Norris expertly paces the exposure, like
a torturer gradually tightening a thumb-screw, peeling away the paper patina to
lay bare the darkness at the core.

Vicki Mortimer’s designs tell us that this is a paper-thin world:
fragile, bitter and comfortless. The underbelly of both the theatre and the
East End are exposed, and iron scaffolding and flimsy tissue flats embody the
latter’s extremes. Blood-stained body-bags plunge from the heights, their
red fly-ropes reminding us that both murder and the noose are never far away.
The bands of beggars are a ghostly troupe of shadows, balaclavas masking their
humanity. The stairwells swivel but they lead nowhere; there’s no way out
of this underworld. Despite the updating, Mortimer and Norris don’t sweep
away the spirit of the 18th-century East End, hungry and haunted.
Its starkness is matched by Stephens’ coarse, smut-strewn text which
adopts a contemporary vernacular — ‘What a twat!’ spits
Peachum — and recalls John Gay’s practice, in The
Beggar’s Opera, of superimposing new vulgar texts onto well-known
songs: ‘Oh London is a fine town’ became ‘Our Polly is a sad
slut!’ 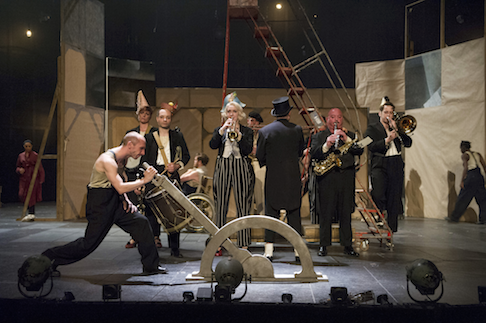 An early tableau is the closest we get to a hint of ‘relevance’.
Labels identifying the causes and victims of poverty are plastered on fragments
of stage-machinery: Addiction, Alcohol, Lepers, Abused Children, Lunatics
— then, as now. When the roll-call of misery gets to ‘Teenage
Runaways’, the cast’s parodic knee-twist prompts a guffaw from the
audience, but the succeeding comment that they are ‘all undoubtedly
victims of the most horrendous sexual abuse’, quickly stifles it.

Norris doesn’t overdo the Brechtian alienation gimmicks: a few
gestures, such as a barked ‘Scene Change’ or
‘Interval’, nod in the direction of ‘epic’. There are
some self-knowing shrugs, as when Macheath hustles a saxophonist off the stage,
or snarls at us after the interval, ‘So, you came back!’, but
they’re not overly intrusive.

A t-shirt slogan — ‘Over’ front, ‘-ture’ back
— signals the striking up of the band, who march to the fore-stage while
behind a dumb-show parade sums up the action to come. Future victims of
Mack’s knife spew rope-entrails and there’s a pantomimesque
hyperbole which persists when we meet the rapacious, crooked Peachums. Nick
Holder’s Mr Peachum — eyes powdered with dark-rings, lips painted
vampire-red, dapper in pin-stripe, pinafore and spats — and Hadyn
Gwynne’s scarlet-frocked Mrs Peachum, inebriated and projectile-vomiting,
have a touch of Rocky Horror Show about them. But, if initially Peachum seems
merely a rotund, mischief-making opportunist, we are swiftly disillusioned: no
amount of perfume can hide the stench of this Peachum’s callousness
— as the cringe-making snap of Jenny Diver’s wrist later confirms.
Holder relishes the vulgarities of Stephens’ lyrics — they’re
all crystal-clear — and he’s well-abetted by Gwynne in the comic
ribaldry. 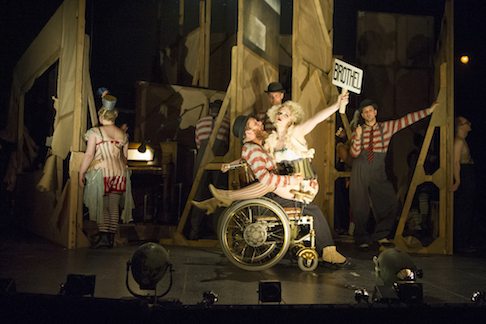 Similarly, the clipped brusqueness of Kinnear’s business-like
Mackheath — the fine cut of his double-breasted, midnight-blue suit would
flatter a banker — eventually slips into a tight snarl, bursting with
psychopathic viciousness. This Macheath might arrive in a glowing ring —
like an old-time Hollywood legend — fairy-lights twinkling behind, but a
knife-silhouette speaks of his ruthlessness and as the repressed violence is
released it’s clear we’re watching a psychotic bully at work, one
prepared to tyrannise, brutalise, sodomise to get what he wants. The only hint
of ‘charm’ comes with ‘Mack the Knife’, delivered with
style and appealing vocal warmth, where Kinnear’s enjoyment of
Weill’s seductive sway and Stephens’ sharp lyrics almost convinces
us that there might be a human heart beneath the hardness, after all.

But, no: Kinnear’s Macheath is a study in gratuitous nastiness. But,
he’s not Brecht’s Macheath, who demonstrates pretensions towards
bourgeois rites and taste — with his fondness for matrimony and pride in
his ability to distinguish Chippendale from Louis Quartorze when his men supply
him with stolen furniture. In Brecht’s text, Macheath’s has a
reckless bravado and magnetic attractiveness that outweigh any capitalist
manifesto. In contrast, Kinnear’s Macheath may get want he wants, but
it’s not clear why he wants it — is he just a killing machine whose
life has become the knife?

Macheath’s henchmen are a dysfunctional foursome, as emotionally
impaired as their overlord. Jamie Beddard, who has cerebral palsy, is cast as
Matthius (aka The Shadow): he may have a speech impediment but he spits out
Stephens’ expletives to the far reaches of the Olivier with acerbic
clarity and corrosiveness. Dominic Tighe conveys the stiff coldness of the
‘Iceman’, while you wouldn’t want to meet Hammed
Animashaun’s explosive Jimmy Retail on a dark night.

Polly Peachum’s knee-length brown cardigan is out of place in this
existential hinterland, though Rosalie Craig does later don some thigh-high red
leather boots under her white floral frock. Craig stands out among the cast for
her ability to tap into the emotional resonances of Weill’s music. She
dispatches ‘Pirate Jenny’ with steely spite, revealing the strong
core beneath Polly’s bespectacled, straight-laced exterior, and she
excels in the ‘Jealousy Duet’ with Debbie Kurup’s Harlem-girl
Lucy Brown. Kurup’s voice glows as vivaciously as her orange shirt and
red hot-pants. It’s clear that neither girl is going to be a winner. 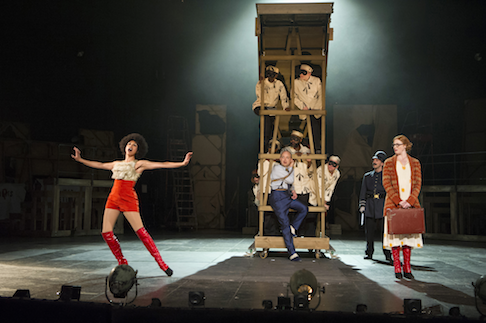 Sharon Small is affecting as the drug-addicted Jenny Diver, though she
struggles with Weill’s challenging vocal line. Peter de Jersey is a
strongly characterised Chief of Police, but I didn’t get the sense that
he and Macheath were ‘partners in crime’.

The stage-craft is slick. The sleight-of-hand shifts between scenes and
locales are breathless and disorientating; the big musical numbers are tightly
choreographed, their juxtaposition with the surrounding text highlighted by
Paule Constable’s effective ‘Songlicht’.
The fight scenes are both vicious and balletic: the unintentional stabbing at
the end of Act 1 is perfectly timed and Kinnear captures both Macheath’s
shock — a momentary wide-eyed stillness — and defiance as,
confident that he will indeed ‘wriggle out of this one’, Macheath
is whirled off-stage in a wheel-chair.

This may be a ‘play with music’ but Weill’s music —
the songs, ensembles and the instrumental interludes played during the scene
changes — is anything but incidental. The ensemble cast may be singing
thespians rather than acting singers — and some struggled to convey the
dramatic and emotional richness of Weill’s score — but none of
Brecht’s and Weill’s original cast, on 31 August 1928 in the small
Theater am Schffbauerdamm in Berlin, was a professional opera singer. The
occasionally unpolished vocal delivery matches the rough-edged set and they are
magnificently supported by David Shrubsole and his musicians, who wander in and
out of the action in macabre gothic get-ups. As Mortimer’s sets
disembowel the theatre, so Shrubsole’s band turn the opera inside
out.

This is a terrific production which I would urge no one to miss. But,
reflecting post-performance I found myself more sceptical about what essential
‘messages’ the production was designed to communicate. 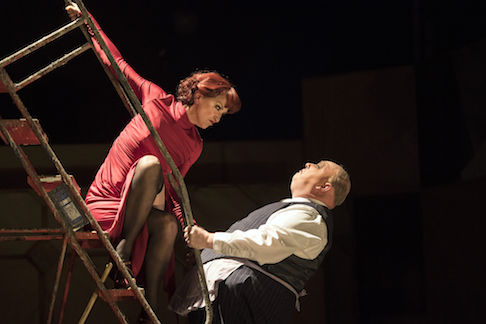 Die Dreigroschenoper was initially conceived as art about art. In
Brecht’s text, during his wedding Macheath quips, ‘I’m not
asking for an opera’; and, when the knifer is reprieved at the close,
Peachum retorts, ‘So at least in opera, one can see how mercy comes
before justice’. It may have drawn from diverse worlds — dance
band, Lutheran chorale, jazz, popular song — but the work is consistently
in dialogue with ‘high’ culture (John Gay, François Villon,
Rudyard Kipling, Wagnerian leitmotiv, Stravinsky, Satie, Cocteau, Picasso
…). Weill remarked thatDie Dreigroschenoper ‘presented us
with an opportunity to make “opera” the subject matter for an
evening the theatre’.[1]

But, when Brecht published a revised version of the libretto in 1931, he
re-wrote the dialogue to strengthen the political message, and said, in a 1933
interview, that what mattered to him was ‘A critique of society. I had
tried to show that the mind-set and emotional life of street robbers is
immensely similar to the mind-set and emotional life of respectable
citizens.’ Brecht designed his text to reveal the true unacceptable face
of capitalism, in which criminals who are similarly bourgeois set the tone for
business. It seems ironic that, for all Stephens’ skewering of fat cats,
corporate golden handshakes and peers’ expense scandals, a lot of money
has been spent at the National Theatre in depicting a world that has none, in
order to perform ‘high’ culture, to an essentially middle-class
audience.

We remember the words of Brecht’s ‘First Threepenny
Finale’, delivered by a cynical Peachum:

Let’s practise goodness; who would disagree?
But sadly on this planet while we’re waiting
The means are meagre and the morals low.
To get one’s record straight would be elating
But our conditions such it can’t be so.