Alas, David McVicar’s production — for the moment,
I am considering solely the staging, for there was much to admire in the
musical performance — proved by far the weakest. Alas, we see here the
continuation of the sad decline of a once accomplished director — his

ENO Turn of the Screw remains the finest I have seen — into
the Franco Zeffirelli de nos jours. McVicar’s Glyndebourne
Entführung seemed like a caricature of something from an alleged
‘golden age’, which of course never was and never could have been,
before the alleged invention of big, bad ‘Regietheater’.
As I discuss in my recent book,
After Wagner, that would take us back at least before
Wagner’s own opera stagings. Indeed, it would take us back,
paradoxically, to a time of opera staging prior to the origins of opera.

Such an approach, if one may call it that,
disdaining, with more than a hint of Teutonophobia, any hint of the directorial
Konzept , could hardly find a composer less suited to it than
Wagner. And yet, there seems, to start with, as though there might actually be
a Konzept: well, an updating, at least. For the action does not take
place in sixteenth-century Nuremberg, but rather in the earlier nineteenth
century, presumably at around the time Wagner was growing up. There is much to
be said for such an idea, looking at the societal influences upon the young
Wagner, which certainly helped shape his world-view (from a more hostile
standpoint, his ideology). Moreover, the guilds and corporations came under
sustained post-Enlightenment attack at this time, the Stein-Hardenberg reforms
in Prussia, for instance, offering more or less the only instance in that
reforming programme of a policy vehemently opposed by Hegel (as an attack on
partial association, on civil society). The guild in Nuremberg, then, might be
portrayed as under attack; that, after all, is partly the meaning of
Walther’s intrusion, a typical Wagnerian move of introducing a
charismatic leader from outside. And so we might go on. There is,
unfortunately, no attempt to do anything with the updating. Indeed, as with the
aforementioned Entführung, or as with
McVicar’s Marriage of Figaro for the Royal Opera , one is
left with the nasty suspicion that the principal point, or at least principal
result, of the updating is simply to present us with a host of
‘pretty’ designs. Vicki Mortimer’s handsome designs might
have done so much more — or even just a little more.

Moreover, the typical McVicar trait of reducing drama to mere
‘entertainment’ is much in evidence here. There is nothing wrong
with art being entertaining, of course; much of it would be failing if, in at
least some sense, it were not. However, here the playing to the gallery —
and not in some metatheatrical sense, imitating or leading the relationship
between the Masters and the populace — becomes especially wearying.
‘Amusing’ interpolations, which serve little or no purpose other
than to make those who have partaken of a few too many erupt into apparently
helpless laughter, are too often the order of the day. (Quite what led someone
to the verge of hysteria during Sachs’s Wahn monologue, I have
no idea; on that occasion, the responsibility does not seem to have lain with
the production.) And since every McVicar production now seems to have
compulsory choreography by Andrew George, we have silly, irrelevant dances,
especially painful at the opening of the second act. Beckmesser, for some
reason best known to the director, becomes a preening figure of high camp.

Fortunately, the score was in better hands. The London Philharmonic
Orchestra was on excellent form throughout. Clearly well rehearsed, the
orchestra offered as satisfying a German tone — the strings, to my ears,
more typically Brahmsian than one often hears in Wagner, but certainly, in this
of all Wagner’s dramas, none the worse for that — as one is likely
to hear in this country. There were, moreover, many elements of exquisite
wind-playing, doubtless having their roots, at least in part, in the
LPO’s long experience of performing Mozart here at Glyndebourne. Michael
Güttler’s conducting never drew attention to itself; in the first
and second acts, it perhaps lacked the sense of life with which the greatest
Wagner conductors will bring the melos into dramatic reality, but
there was sure structural understanding. In the third act, which, perhaps not
coincidentally, offers a more satisfying, if defiantly conservative, experience
in McVicar’s staging too, Güttler seemed relatively liberated. His
was never an ‘interventionist’ account, but there was a greater
willingness to play, and to let the singers, play with the ebb and flow.

What made this Meistersinger compulsory viewing (and listening) for
me, however, was Gerald Finley’s Hans Sachs. Finley had also played the
role in Herheim’s Paris production. Perhaps because of the lack of
anything here to say from the staging, he sounded, if anything, finer still. At
any rate, the distinction of his performance fell into greater relief, for I
have never heard a finer rendition, more anguished and yet, ultimately, more
imbued with relative hope, of the Wahn monologue than here.
In ‘purely’ musical and in verbal terms, this was a Sachs whose
role emerged from lengthy experience and understanding of Lieder. The
size of the house probably helped too, the Bastille perhaps not the ideal venue
for Finley, excellent though his Paris performance undoubtedly was. 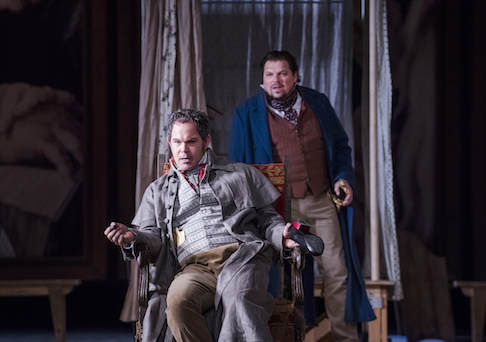 Michael Schade seemed miscast, I am afraid, as Walther. If he made a better
job of the role than I should have suspected, he too often sounded strained.
Little of the ‘natural’ — whatever that might mean —
ease with which Walther should pour forth his artistry was present. However,
his Eva, Amanda Majeski, offered a beautifully sung performance, drawing, as
does the character, upon greater reserves of feeling as the work progressed.
There was nothing of Bösch’s radical (feminist) reappraisal here, of
course, but Sajeski did a good deal with what she had. Jochen Kupfer did a
sterling job with McVicar’s jarring understanding of Beckmesser; indeed,
he managed almost to convince us that this was an illuminating standpoint. If
he could not quite do so, that was not the fault of this fine actor, whose
darkly attractive vocal portrayal proved equally impressive; I hope to see him
play the role in another staging. David Portillo’s lyric tenor was just
the thing for David: his was an eager, diligent, attractively sung performance
very much in the traditional mode. Hanna Hipp’s Magdalene complemented
him with similar qualities and great warmth of tone. Alastair Miles’s
Pogner sounded somewhat elderly at times, but that is hardly inappropriate
here. Last but far from least, the singing of the Glyndebourne Chorus,
well-prepared indeed by Jeremy Bines, was something to savour from beginning to
end. In a house of this size, it sounded just right: words and music in
excellent balance, warmth and clarity anything but antithetical. If only the
staging had given them something more interesting to do.