Lately, some directors have been updating this work, so Henry Price’s traditional version was most welcome. Many members of the Nevada audience are new to opera, so it was important to give them what they expected to see. Price is a former tenor best known for his performances at the New York City Opera opposite Beverly Sills. He is now Professor of Music at Pepperdine University and he has directed several excellent Italian opera productions.
Hannah D’Elia’s sets were constructed of expertly painted canvas that created the ambience of old Spain where sunlit upper surfaces contrasted with deep darks below. The attractive, detailed costumes that Jennifer McKee designed put the time of the action firmly in the romantic past.
Maya Lahyani is a born Carmen. The demands of the role lie smoothly on her voice and she has strong resonance all across its range. Most of all, she created a charismatic figure that held the attention of every member of the audience. For a young singer who had only performed the title role of Carmen in two previous productions, her grasp of its intricacies was amazing. 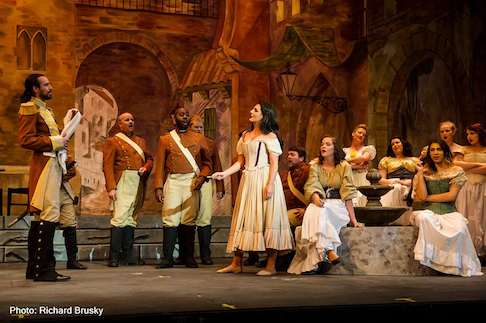 Last year, dramatic tenor Viktor Antipenko’s portrayal of the scoundrel, Pinkerton, in Puccini’s Madama Butterfly was a major hit. As Don JosÈ on Friday night, he was equally triumphant. The tenor role opposite Carmen is difficult because it requires a great deal of dramatic singing in each of its four acts but has a major aria in the second act with an exposed pianissimo high note. Antipenko succeeded on both counts.
As Michaela, Susanne Vinnik was somewhat less successful. Her role also has dramatic singing, which she accomplished well, but she sang her lyric phrases with an excess of vibrato. As Escamillo, Trevor Scheunemann was a true grit torero who looked as though he could stare down the most ferocious of bulls. He sang his memorable aria with burnished bronze tones.
Carmen’s women friends, soprano Emily Botts as Frasquita and mezzo Kylee Slee as MercËdes, made some fine additions to the singing. Botts, in particular, added blooming high notes to the mix. Bass-baritone Peter Johnson was a commanding Zuniga and baritone Eugene Richardson a straight laced MoralËs. As Le DancaÔre Brian James Myer was an adept scout while his partner-in-crime, Aldo Perrelli as Le Remendado, took life a little less seriously.
With the help of conductor Gregory Buchalter and Lahyani, these singers gave a fast rendition of the challenging quintet. Much of Bizet’s Carmen is dance music and Buchalter gave us a catchy and rhythmic reading of the score that invited its characters to dance. It invited the audience to mentally tap their toes, too, but the house was full and that precluded dancing in the aisles! It was a wonderful evening in Las Vegas and I, for one, hope we will have another show from Opera Las Vegas before the year is out.
Maria Nockin