Horovitz has had a prolific career as a conductor, teacher, opera director
and composer. His works number sixteen ballets, nine concertos, two one-act
operas, chamber music, works for brass band, television and radio, and a number
of choral cantatas – most famously Captain Noah and His Floating
Zoo.

Soprano Susanna Fairbairn, a PLG Young Artist in 2015, performed four of
Horovitz’s compositions, accompanied by pianist Matthew Schellhorn,
beginning with Lady Macbeth, which was written for the 1970 Festival
of Bergen. The ‘Scena’ presents settings of three
speeches from Shakespeare’s play and charts the queen’s progression
from grandeur to guilt, majesty to madness. Fairbairn gave a powerful dramatic
performance which captured the force of the music’s rhetoric. Her full,
glossy tone conveyed the self-assurance of Lady Macbeth’s aspirations for
power, when she learns of her husband’s lauded success on the battlefield
– ‘Glamis thou art, and Cawdor, and shalt be’. And, she declaimed
the challenging vocal lines, which depict the Lady’s mental distress,
with conviction, above Schellhorn’s asymmetrical piano gestures.
Schellhorn’s accompaniment is as much part of the drama as the
queen’s magniloquence and the pianist crafted the arguments eloquently
and with precision. Fairbairn had the measure of the operatic intensity of the
work which compresses an extraordinary gamut of emotions into its nine
minutes. 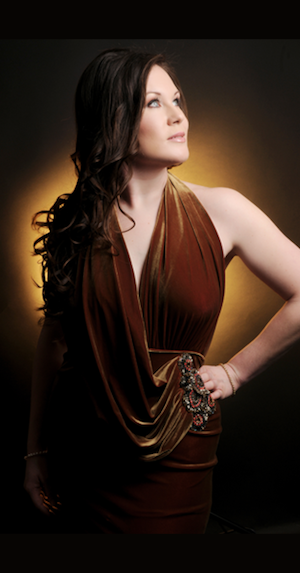 Though Shakespeare’s text is well-known, and Fairbairn’s diction
good, it still would have been helpful to have had the text printed in the
programme. The same was true for the following song, ‘Zum 11.
M‰rz’, a 1998 setting of a German text by Theodor Kˆrner (1811). 11 March
is a date of special significance for Austrian emigrÈs, for it was the date in
1938 of Austria’s Anschluss to Germany. Fairbairn spun the simple lyrical
melody with a lovely gentleness and lustre, floating the final phrase most
beautifully. ‘The Garden of Love’ (2015) had a silky wistfulness,
perfectly attuned to Blake’s text which celebrates the naturalness of
human desire in the face of the Church’s repressive restrictiveness.

Fairbairn and Schellhorn opened the recital with Debussy’s
Ariettes oubliÈes. The cool, quiet piano introduction of
‘C’est l’extase langoureuse’ (This is the languorous
ecstasy) led into an unhurried vocal descent of calm dreaminess.
Fairbairn’s soprano brightened and became more incisive as Verlaine
described the burbling and whispering of the wood’s choir of voices, then
drifted off, languidly, as the imagery of swirling water evolved into a
soul’s lament. At the climax of the vocal line, Fairbairn hit the high A
right in the centre of the note and skilfully controlled the dynamic arc,
closing on a hushed, low murmur.

Schellhorn’s oscillating semiquavers evoked the ripple of the rain
that ‘weeps in my heart’ in ‘Il pleure dans mon coeur’,
and Fairbairn again demonstrated impressive technique, controlling the rising
and plunging octaves which convey the poet-speaker’s emotional unrest and
distress. Both the warmth of her lower range and the crystalline brilliance of
the top were in evidence in ‘L’ombre des arbres’ (The shadow
of the trees). Tight left-hand trills beneath crisp staccatos were a perfect
springboard for the voice’s nimble instruction, ‘Tournez,
tournez’ (O whirl and twirl’), in ‘Chevaux de bois’
(Wooden horses), in which the tempo eased, then flowed, with naturalness. The
opening of ‘Aquarelles I. Green’ was graceful and free, the
low-lying close mysterious and veiled. On the whole, Fairbairn’s French
was fairly idiomatic, but would have benefitted from more distinct consonants,
and this was particularly noticeable in the declamatory opening of
‘Spleen’. Debussy’s cycle was followed by FaurÈ’s
‘AprËs un rÍve’, in which Fairbairn’s radiant sheen surged
through the long, flowing phrases.

The central works in the evening’s programme were presented by pianist
Dominic Degavino. A Park Lane Young Artist in 2015, Degavino is a rising star.
At 16 years of age he was a category finalist in the BBC Young Musician
competition; two years later he won the Audience Prize at the Brant
International Piano Competition; since then he’s added the Ker Memorial
Prize at the Royal Over-seas League Music Competition and most recently won the
piano section of the 2016 Tunbridge Wells International Young Concert Artists
Competition. His deeply communicative performance of Beethoven’s Op.2
No.3 Sonata confirmed that these successes will surely be followed by many
more. The Allegro con brio had plenty of spark: the passagework was
taut and the frequent trills and turns razor-sharp. After a changeable
development section, the return of the opening theme was charmingly
insouciant.

The Adagio conveyed a wonderful composure and gravity, the theme –
gorgeous in its simplicity – formed of single-bar units which merged fluently
into a thoughtful whole. As the left hand repeatedly crossed the decorative
undulations in the right, the syncopated sighing motifs of the melody were
beautifully crafted. The arpeggio-triplets of the trio of the Scherzo:
Allegro streamed as if conjured by a flourish of a magician’s wand,
while the chiselled crispness of the Allegro assai finale was
invigorating. After the interval, Degavino revealed the many moods of
Schumann’s G Minor Sonata Op.22, by turns troubled then soothed, expertly
moving from bravura to restfulness. The Andantino was particularly
tender. Degavino had a strong sense of the overall structure of the sonata and
communicated this clearly.

The recital came to a vivacious close with Horovitz’s
Foie-Gras, a setting of Michael Flanders paean to gluttony. Fairbairn
entered enthusiastically into the cabaret high-spirits, whispering
conspiratorially then gushing exuberantly, whirling with abandon across the
Wigmore Hall stage. Taking to the platform to accept the warm applause,
Horovitz was surprised to be presented with a birthday cake, and cut the
celebratory slice with panache.

An afterthought … with the ‘Brexit’ campaigners seemingly in the
ascendant, and a ‘Leave’ vote looking ever more possible, Piers
Burton-Page’s programme tribute to Horovitz seems most apt: ‘In a
few days’ time we shall learn whether Britain has, scarcely believably,
turned its back on Europe. Once, we knew better. Thanks for coming, Joe. And
for staying.’