The unit
set, semi-realistic historical costumes, and laugh-out-loud glittering swan of
Christine Mielitz’s tired old production, first seen in the 1980s, need
not detain us. It had only one virtue: two operatic stars essaying Wagner for
the first time could park all night on the front lip of the stage, comfortably
close to the prompter’s box, and sing. This evening was all about the
music.

Can Anna Netrebko sing Wagner? Announcement of her first foray on stage
provoked many worries, most of which proved groundless. Netrebko herself said
that her biggest problem was to master the German text. Yet her crisp (if not
quite idiomatic) diction rendered Wagner’s faux medieval poetry easily
intelligible. Some doubted that her voice is big enough for Wagner. Yet at
forte she easily rode Christian Thielemann’s robust orchestra
and in ensembles she cut through massed orchestral sound more vividly than the
experienced Wagnerians beside her. Others questioned whether her voice
possesses that ineffable, lyrically virginal “Elsa” sound. She
certainly can project such a timbre when she chooses to do so. Moreover, the
natural quality of her voice—secure and even, warm yet penetrating,
shading from a dark cello resonance at the bottom to sweet violin sound with a
slight metallic glint at the top—is one of the glories of the modern
operatic world. Most people at the Semperoper last Wednesday would have come to
hear her sing the telephone book.

Still, Netrebko’s Elsa remains a work in progress. The most deeply
moving passages she sang are as lovely as those of any soprano in a quarter
century. They tended to come at times of Elsa’s greatest repose and
reflection, for example her virtuous glow after seeming to rescue Ortrud or
stunned regret after asking the fatal question. Music and drama would come into
vivid focus, and, for a brief moment, Netrebko showed that she has what it
takes to be an Elsa for the ages. 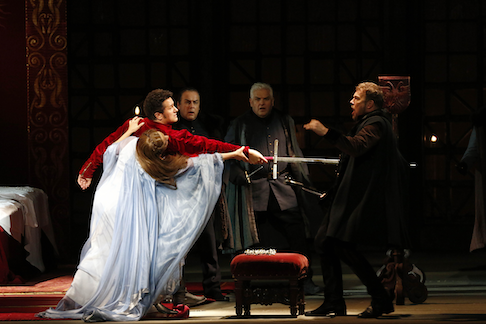 Yet more often she simply oversang. Her instrument has grown remarkably in
recent years, yet she still sometimes feels the need to barge into phrases,
arias and scenes. She also overuses a particular pressed and slightly spread
timbre she has developed to bulk up the voice for spinto parts. All
this was entirely unnecessary in a reverberant house like the Semperoper,
except perhaps to underscore a few anguished fortissimos.

This overtly emotional approach often places her at odds both with
Elsa’s character and with Wagner’s score. Consider the first stanza
of “Einsam in trüben Tagen”—the aria of spiritual
reverie that introduces Elsa to us as a dreamy mystic. Wagner tells singers
exactly how to achieve the appropriate effect: eleven measures at
piano or pianissimo describing Elsa’s
“lonely…prayer” are followed by a quick crescendo culminating
in a “powerful cry” to the heavens, followed by 8
measures at the original dynamic markings as a “distant echo”
induces her “sweet sleep.” In short, it is a
gentle dream or vision.

Netrebko sings the passage broadly and more loudly from the outset,
expressing emotional agitation more appropriate to Senta than Elsa. She is
surely capable of greater vocal focus and more introspective characterization.
One must assume that in order to do so, she simply needs time to fully
internalize Elsa’s character. Unfortunately, in this era of intense media
scrutiny, she may not get it. High-definition cameras in the hall suggest that
this performance will be distributed on video. Let’s hope that she
nonetheless reprises the role often enough to refine it—perhaps at
Bayreuth, where Thielemann is reputed to be planning to reassemble this
cast.

The other Wagnerian debut in this production was that of Polish tenor Piotr
Beczała, a 49-year old bel canto and early Verdi specialist, in
the title role. Few modern singers possess the voice type traditionally
associated with Lohengrin. To hope today for the baritonal resonance, honeyed
voix mixte, and stentorian declamation commanded by Lauritz Melchior,
Franz Völker, Wolfgang Windgassen, Sándor Kónya or even
Plácido Domingo is to dream that a glittering Grail Knight will appear to
solve our problems in casting Wagner. 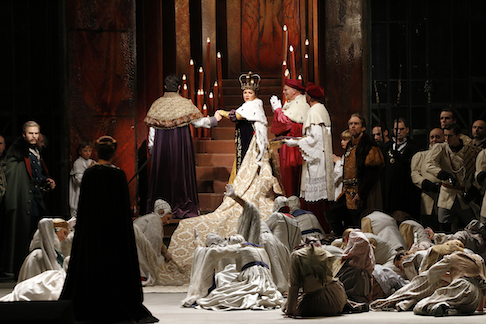 Instead the role of Lohengrin now belongs almost exclusively to lyric
tenors. Ironically, in an era when opera houses pride themselves on eschewing
“park and bark” vocalism, the primary virtues of such singers lies
almost entirely in producing a sweet and uniform timbre bordering on choir-boy
purity, sometimes backed by clever use of falsetto. They find it
nearly impossible to project the mysterious combination of heroic warrior and
pure saint that led generations to view Lohengrin as a uniquely fascinating
figure. We should not forget that, while Lohengrin may live in a monastery, he
comes to Brabant to prevail in battle with Telramund (a heavy-weight Wagner
baritone) and then to lead armies (a robust four-part men’s chorus) to
victory. Lyric tenors often come across like boys sent out to do a man’s
job.

Within these limitations of our times, Beczała makes a convincing
Lohengrin. The voice, while not as pure or even as some, is technically solid
and penetrating, beautiful in the middle and ringing at the top. He is an
honest and intelligent musician, more overtly emotional and characterful than
most, and able to distinguish subtly and thoughtfully between the more heroic
and the more personal aspects of the character. He shapes the music
affectingly, points the words well, and deploys a somewhat limited dynamic
range sensitively, particularly in the big areas. Only occasional loss of
control around the passaggio, some inaudible low notes, and a slight
vocal roughness (absent in his more glamorous assumptions of lighter roles)
betrays some underlying strain.

The rest of the cast gave strong support. Today major opera houses often
cast singers as Ortrud who possess great intensity of expression, but lack
refined control over dynamics, intonation and phrasing. Evelyn Herlitzius is an
example: she used her Elektra-weight voice to threaten, bellow and vamp. The
resulting scenery-chewing—and not just in the famous curse—was
entertaining and forceful enough to generate a clear contrast to Netrebko.
Never mind that it sometimes bordered on caricature and, in some lower-lying
passages, exceeded Herlitzius’s vocal capacity. The 44-year old Polish
bass-baritone Tomasz Konieczny used nearly as large a voice to snarl his way
menacingly through the role of Telramund. He, too, offered a vivid portrayal,
even if his interpretation lacked nobility, subtlety or beauty, and his German
was only rarely intelligible. 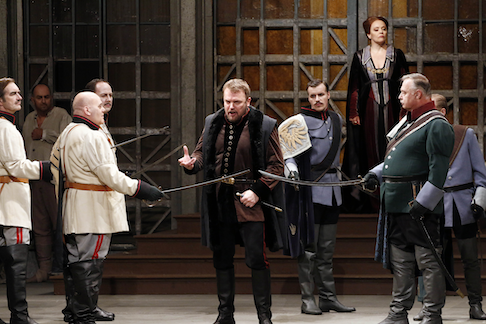 The bottom of the ensemble was bolstered by two impressive basses. As with
tenors, great pure voices of this type are rare today. Still, Dresden-based
Georg Zeppenfeld sang a darkly-colored, elegant and clearly
articulated König Heinrich, while the young Australian bass Derek Welton,
based at the Deutsche Oper Berlin, resoundingly declaimed crystal-clear German
as his Heerrufer. Both are singers destined for greater things.

Undergirding it all was Thielemann’s robust Staatskapelle Dresden.
Thielemann favors bold, forceful and somewhat rough-hewn Wagner—an
approach, some might object, that suits Lohengrin less than other
Wagner works. Yet other orchestral virtues—tight ensemble, sensitive
vocal accompaniment, subtle emphasis on middle instrumental voices, and
thrilling brass in the antiphonal fanfares—assured an impressive result.
The chorus sang robustly, though it might have been more precise and
transparent in the sections with split parts. The sound resounded in the
wonderfully full acoustic of the Semperoper.

Overall, this is the type of high-profile triumph that Dresden must offer
regularly to compete with leading German houses in Berlin and München.