One of the greatest wonders of this masterpiece is precise detail with
which the numerous quirky inhabitants of the village are sketched in the
score. Princeton Festival assembled a strong ensemble to realize
Britten’s vision. Baritone Stephen Gaertner—who has gone on to
great things since triumphing here some years back in a double bill of
Rachmaninoff’s Francesca da Rimini and Puccini’s
Gianni Schicchi— brought a combination of world-class vocal
glamor and appropriately sober restraint to his portrayal of the wise old
skipper Balstrode. Young mezzo Eve Gigliotti’s clear diction,
resonant voice, and sympathetic manner brought Auntie, the madam with a
heart of gold, to life before us. Veteran mezzo Kathryn Krasovec, who sang
a memorable Marcellina in last year’s Marriage of Figaro
here, vivid caricatured the sleuthing laudanum-addicted busybody Mrs.
Shepley, highlighting her absurdity rather than the remarkable variety of
her sins. As the Methodist Bible-thumper Boles, Tenor Casey Finnigan
projected words and music clearly and idiomatically. Bass-baritone Joseph
Barron launched the evening with stentorian tones and clear diction as the
lawyer Swallow. Characterful performances also came from Colorado-born
tenor Logan Webber as Reverend Adams, Ohio-born baritone Sean Anderson as
Ned Keene the Apothecary, and Metropolitan Opera bass Christopher Job as
Hobson. Two young sopranos trained at Indiana University, Jessica Beebe and
Sharon Harms, sang cheerfully while strutting their stuff as the so-called
nieces. 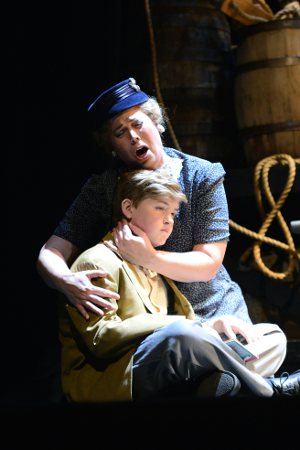 Caroline Worra as Ellen Orford and William Guhl-Erdie as John

While Peter Grimes is an ensemble opera, a successful
performance relies heavily on the vocal and theatrical charisma of its two
lead characters: Ellen Orford and Grimes himself. Wisconsin-born Caroline
Worra, a repeat favorite at the Princeton Festival, made for a passionate
and sympathetic Orford. She approach was as intensely expressive as any I
have heard, an impression strengthened by fine diction and bright vocal
timbre. In approach the role this way, Worra is simply following trends in
modern sensibilities: today we expect middle-aged relationships such as
that between Grimes and Orford to be more overtly romantic, whereas in
mid-20th century (let alone early 19th century)
England, such people expressed affection in a more restrained and discreet
manner. Nonetheless, Worra’s performance was convincing, even if she
sometimes ran roughshod over Britten’s express intentions, for
example the long delicate passages marked “ppp senza
espressione” in the “Embroidery” aria.

Even more important to a successful performance is the casting of the
title role. Many modern listeners treat Jon Vickers, with his heroic voice
and rough-hewn histrionics, as an ideal singer in this part. Yet while
Vickers’ Grimes was surely among the most memorable operatic
assumptions of modern times, it was unique. Britten and Peter Pears, who
created the role, both favored a lighter and more lyrical voice and more
contemplative interpretation, so as to bring out the vulnerable, spiritual,
and even likeable sides of the character. Most tenors who sing the
role—among them Phillip Langridge, Anthony Dean Griffey, Anthony
Rolfe-Johnson and Pears himself—approach the role this way.

Alex Richardson takes this lyrical approach as well. His voice is
reasonable-sized, although it did not penetrate the hall as well as some
others on stage. His performance was thoughtful, musical and generally
coherent, and—but for a bit of hoarseness at the top—his voice
generally fits the role. Yet—at least on Thursday, when I heard
him—he was the weakest link in the cast. Vocally, he lacked the sweet
purity and extreme flexibility in the high tessitura that is required to
negotiate much of Grimes’ part. Theatrically, his assumption seems
not yet to have accumulated all the inspired nuances of edgy
characterization that transform a solid rendition into a distinctive stage
character whose personality seems sharply etched and whose suffering opens
a window into the essence of the human condition. Most of the time he just
seemed too nice and well-grounded young guy, but slightly out of focus.
Still, Richardson remains young, and we may well hear more from him in
years to come as his engagement with the role develops. 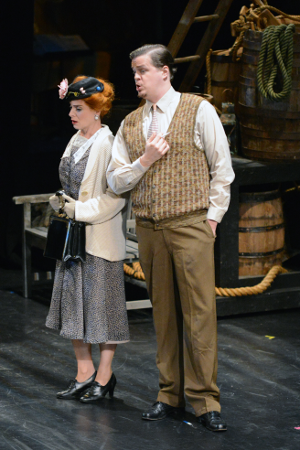 Princeton Festival Director Richard Tang Yuk did a splendid job
preparing and conducting the chorus and orchestra. I have never heard
either one sound so good in this challenging venue. The orchestra played as
if inspired, offering many exquisite moments: one among many was the lonely
viola solo that began the fourth interlude, played here by Julia DiGaetani.
Yuk’s professional skill as a choral director was evident as well.
Though the Festival Chorus is not a permanent professional ensemble, it
negotiated Britten’s tricky polyphonic choruses with verve,
transparency, clear diction and a timbre generally closer to proper English
choral style than most of Americans achieve. Only a few spots of the
greatest technical difficulty (e,g., the famously tricky “Old Joe Has
Gone Fishing” in 7/4) were slightly smudged or too loud.

It was almost inevitable—given a short production run, singers and
players new to the score, and the harsh acoustics of Matthews
theater—that the very subtlest of Britten’s musical effects
would occasionally go by the wayside. Some of Britten’s tripping
everyday-speech syncopations disappeared. Some delicately precise woodwind
and vocal harmonies (e.g. in the quartet “From the Gutter”)
lacked Britten’s magical sense of balance and repose. Some broader
architectural spans collapsed amidst the careful negotiation of a series of
individual orchestral effects, for example in some interludes. Overall,
however, this remained a thoroughly convincing and coherent account of this
classic score.

The set design employed an accessorized, modular semi-realistic unit
set. It told the story well and obviously economized prudently, without
either asking much of, or delivering much to, the audience. Yet it had one
fatal disadvantage, namely that the footsteps of anyone walking across it
echoed loudly throughout the theater, spoiling many moments, particularly
at the start and end of scenes. Set Designer Jonathan Dahm Robertson,
though young, had designed for opera before. He should have known that this
is a fundamental error, especially when designing for an opera like
Grimes, which combines exposed orchestral lines of extraordinary
delicacy with many large choral scenes. And, having found a set of this
kind in place, why did Stage Director Steven LaCosse—who has long
experience directing opera, here and elsewhere—not have the good
sense to keep everyone stationary at such moments? Have we really reached
the era when stage designers and directors no longer bother to listen to
the music? 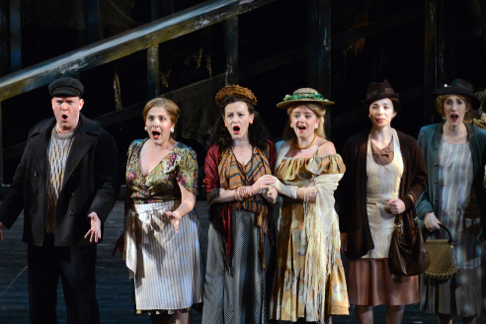 Overall, this was one of the best productions I have heard at the
Princeton Festival, which goes from operatic success to operatic success.
It is a shame that Thursday night’s performance was only half-full,
and many there seemed to be friends or associates of the performers.