Director/Choreographer Se·n Curran has a near unerring aptitude for devising comic movement that is bustling without being tiresome, balancing a stage full of (almost) perpetual motion without losing focus. Mr. Curran is a highly skilled ringmaster of this circus of motives and intentions, and he has crafted a daffy, delicious evening of high-minded chicanery. Mostly.
His treatment of the commedia troupe was especially well coordinated and neatly choreographed for some very skilled performers. When is the last time you saw an operatic tenor sing wonderfully while sinking to the floor in a full split? (Yeah, I didn’t think so. . .) If the director invested less in the more profound sentiments involving the title character, well, superlative execution of the music compensated by filing in a lot of the needed gravitas.
That said, Rory Macdonald’s eventually inspired conducting seemed muted at first. The pulsing, angular strings at the start were a bit ill defined in the house, and the pit seemed stuck at mezzo forte with solo playing coming across better than the tutti. About a quarter of the way into Act One, instrumental colors became more characterful, and the presence of the instrumentalists was more vibrant. Part of this is attributable to Strauss’s scoring choices, of course. Maestro Macdonald clearly had an appreciation for the piece and this infectious enthusiasm elicited focus and aural clarity as the work progressed. By Act Two, everything was firing on all cylinders and the soaring, cresting phrases of the ending made a potent impression. 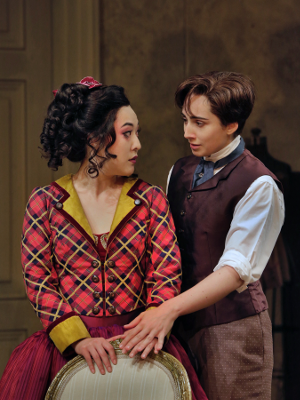 (Left to right): So Young Park as Zerbinetta and Cecelia Hall as The Composer
James Schuette’s handsome sets were straightforward and multi-functional. For the classy interior of the mansion, Mr. Schuette framed the room with a huge rectangular arch covered in an overblown blue chintz pattern. All the requisite doors were in all the right places, and the few pieces of period furniture were carefully chosen and well used. The house gave way to Act Two’s stage-within-a-stage island set, which was dominated by two heavy columns forming a doorway up center.
The chaise lounge remained, on which Ariadne could languish, but once it too got struck, it left Ariadne and Bacchus with more limited staging options. Indeed, once he made his star entrance through the pillars, she remained downstage ignoring him (even blocking him, from some seats). Odd. Having experienced such inventive antics on stage up until then, it just seemed to suddenly become static and unmotivated when it could least afford to do so.
Amanda Seymour had a field day with a costume design that was all that could be desired. Ms. Seymour drew on muted Grecian inspirations, corralled a bit of god-like pomposity, selected a hefty dose of riotous commedia patterns and colors, shook them up in a bag and gloriously spilled them out on the Loretto Hilton stage. Tom Watson, who contributed effective make-up and wig design throughout the festival was in his element here, accomplishing noteworthy looks for the vast range of characters, especially the definitive male commedia troupers. Christopher Akerlind’s lighting design succeeded at balancing muted washes for the “opera” portions with harder edged, vivid tints for the comedians. Only the fuzzy projected fireworks at opera’s end lacked clarity in an otherwise wholly rewarding design.
As can happen, So Young Park almost ran off with the show as a spunky Zerbinetta. Ms. Park is petite, pretty, and sings the spots off the page. Her effortless coloratura is deployed with jaw-dropping accuracy and she puts out plenty of clear, pointed sound. As a performer, she is working from the outside in, that is, as winningly calculated as is her every move, charisma it is not naturally bubbling out of her. She is young and extremely gifted, and I suspect that real inner charm will find a way to inform future performances. In the meantime, there is no one that is singing the role better.
As the Prima Donna and Ariadne, Marjorie Owens is the real deal. Her big, opulent soprano is even throughout the range, and her sense of line and musicality urged phrases to mounting abandon that were so thrilling as to raise goose bumps. She is already singing major roles at major houses and it is easy to see why. The only thing Ms. Owens might benefit from is the cultivation of a bit more Diva Stature. On this occasion, she exuded a certain all-America-girl, your-best-friend’s-sister persona. Some well rehearsed ‘tude may be needed to fully claim her place in this Fach but, oh my. . .that glorious voice. 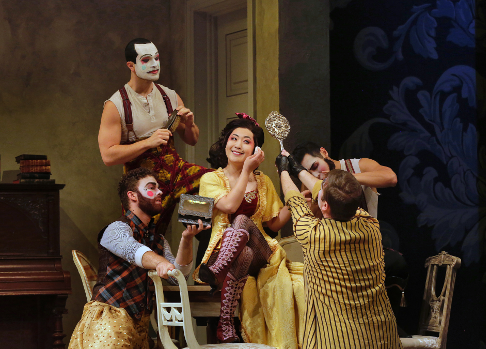 So Young Park as Zerbinetta
AJ Glueckert’s gleaming, meaty tenor was an ideal fit for the grueling demands of Bacchus (and the Tenor). We are so used to be being happy enough with anyone who can bray his manageable way through the role, that is was a delight to revel in Mr. Glueckert’s sturdy, secure and attractive rendition. If only the direction had allowed Bacchus and Ariadne to generate dramatic sparks and chemistry that were equal to their singing.
Cecelia Hall was loudly received and well loved by the audience for her unfailingly musical and stylistically superb Composer. In spite of Ms. Hall’s considerable gifts and seriousness of purpose, and even in consideration of her sublime acting, I thought that her instrument is perhaps a quarter too small a voice for the part, with the few very lowest notes only able to be suggested. She is young. The voice will grow. But what a fine artist.
John Brancy offered a highly enjoyable turn as Harlequin with his smoothly ingratiating baritone and athletic stage presence. He was ably abetted by three agile dancers and accomplished singers: Erik Van Heyningen (Truffaldino), Benjamin Lee (Brighella), and Miles Mykkanen (Scaramuccio).
The effortless, limpid, perfectly matched singing by Elizabeth Sutphen (Naiad), Stephanize Sanchez (Dryad), and Liv Redpath (Echo) would be a worthy trio in any major international company. Their lovely vocalizing and immaculate balance as fluid phrases tumbled over each other was simply ravishing. 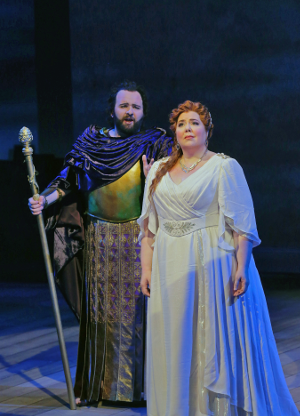 AJ Glueckert as The Tenor/Bacchus and Marjorie Owens as The Prima Donna/Ariadne
.
Broadway vet Ken Page was a perfectly competent Major Domo but could have summoned a bit more snooty unctuousness. Benjamin Dickerson served up a well-sung Wig Maker as a flighty delight. Matthew DiBattista solidly sang an outstanding Dance Master, a case of a major artist nailing it in a minor role. Levi Hernandez, with his beautiful lyric baritone, gentle demeanor, and Smith Brothers beard scored a good success as the Music Master.
I loved the use of the dancers as extras who could freeze as friezes in stately Greek urn poses one moment, and brighten up the general comic mayhem then next. And that is what OTLS’s Ariadne on Naxos manages to accomplish, offering beautifully varied stage pictures that pitted magnificently sung low and high art against each other. At least on this occasion. . .comedy won.
James Sohre