Long before the Trumps and the Clintons, Macbeth and his Lady were the quintessential Power Couple. The two daunting roles are Everest’s in the operatic repertoire in general, and the Verdi catalogue in particular. Thanks in part to its exciting two principals, OTSL scaled the mountaintop.
In the title role, Roland Wood displayed a virile, responsive baritone housed in a Terfel-esque physical presence. Mr. Wood’s amplitude of power is wedded to an incisive delivery and his total dramatic commitment is a wonder to behold. His beautifully modulated instrument is especially ravishing in sotto voce and mezzo-forte passages. Indeed, on occasion he might exercise a modicum of caution when he goes to pulverize a high note, for there is a slight tendency for the tone to splay. Still, Mr. Wood is a Macbeth to be reckoned with.
Julie Makerov’s Lady Macbeth has admirable steel, unfettered drive, and fearless grit. Not bad attributes these, aptly conforming to Maestro Verdi’s wishes. While I initially found her fierce approach to the top a bit acidic, Ms. Makerov soon smoothed and modulated her substantial soprano as she paced herself to the role’s overall demands. Her complete immersion in the character’s unyielding ambition was commendable and she made a potent vocal impression in spite of an (only) occasional scrappiness in knitting the lower middle to the chest register.
While audience response to these two no-holds-barred performers was quite euphoric, I had the feeling that their accomplishments here perhaps represented more an auspicious beginning to roles that will only deepen and refine with further outings.
As Banquo, seasoned veteran Robert Pomakov’s orotund bass had great presence and vibrant tone, which he plangently deployed in his moving aria. The voice occasionally wanted only a modicum of steadiness when he pressed too hard to convey “the drama.” 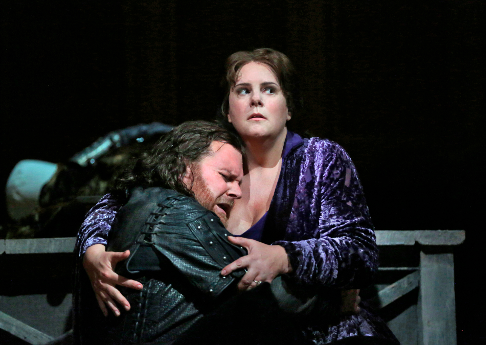 Julie Makerov as Lady Macbeth with Roland Wood as Macbeth
Young Matthew Plenk showed off a sinewy lyric tenor of great promise as Macduff and he was enormously affecting in his aria. Similarly Evan LeRoy Johnson’s Malcom was a considerable asset, his well-tutored tenor providing a good deal of pleasure. As Lady in Waiting, Cheyanne Coss had a distinctive and pleasing timbre, adding immeasurably to the brief moments in which she appears. Dylan Wright’s Doctor likewise contributed phrases of real quality and distinction.
In the pit, Music Director Stephen Lord knew exactly what he wanted, and what he wanted proved to be some faster-than-usual tempi. Actually, that approach had a good deal to recommend it as it glossed over some of the shortcomings of the rather youthful score. The strings especially had a magnificent night, with lush and idiomatic playing from first to last. I also appreciated the selective use of well-calculated astringent bowings that had the same effect as that scraping Psycho theme (with the bloody doings in this opera, that is a complement and a compliment!).
Overall then, Maestro Lord went a bit more for creating driving passages than evoking spooky atmosphere, and his approach yielded effective results. When he finally relaxes the tension and helms a slow-paced final aria for Macbeth, the evening (and the singer) is all the better for it. Too, any number of choral passages found the Maestro in a suitably expansive mood.
Macbeth was performed in Jeremy Sams’ fluent, decent English translation. But, if one were going to paraphrase or change some lines outright as was done here, maybe a translator could somehow work in a few more “famous quotes?”
Lee Blakely directed an evocative, inventive, efficient production, highly theatrical and satisfyingly horrifying (or is that ‘horrifyingly satisfying?’). During the jittery prelude, and in a nod to the original trio of Shakespeare’s witches, three black clad women are tending to the dead (or dying) Thane of Cawdor prone center stage. To establish a ritual-like presentational style, the three solemnly pick up dead branches from the sides and construct a circle around the corpse. These pick-up sticks are well integrated to serve any number of fine theatrical purposes, not least of which is bringing about the coming of Birnam Wood to Dunsinane.
Alex Eales’ moody, practical set design with its fascist banners was imposing, functional, and illuminating. Big, neutral, wainscoated legs and borders configure in any number of ways to focus and frame the action, even irising in and out to indicate beginnings or ends of scenes. And fluid placement of plain wooden platforms and stairs did all that was needed to suggest the shifting locale while giving director Blakely ample opportunities for varied staging. 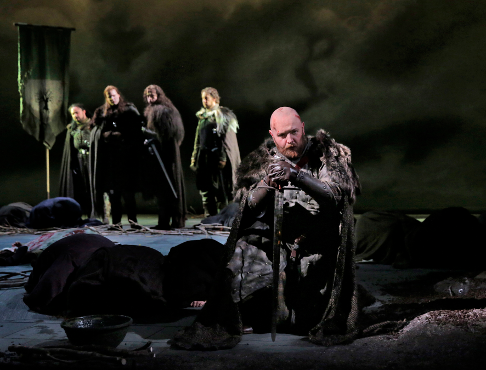 Robert Pomakov as Banquo
Mark Bouman’s beautifully considered period costumes did much to help define the characters. The difference of station between the privileged royals and the long-suffering populace could not have been better visualized. Christopher Akerlind’s excellent lighting was up to his usual high standard. Shadowy washes portended the drama well, and major moments were pointed up by isolating them with imaginative specials.
In an evening chockfull of fine choices and inventive staging, it is hard to praise all of them. Mr. Blakely cleverly sets Banquo’s assassination in a chapel where King Duncan is lying in state. Banquo’s killers blithely receive communion before committing their bloody deed. Macduff’s lament for his butchered family is played out with him and the refugees on the forestage, while the Macbeth’s (who ordered those murders) are revealed upstage sitting at either end of a huge banquet table, coolly eating supper.
Best of all, for the witches’ second appearance, the scene begins with Macbeth asleep in a lavishly appointed bed. He wakes up (or does he?) the bed is stripped, the sticks reappear, the witches’ heath is created, and all manner of magic happens as new predictions tumble forth, with endless shriveled baby dolls plucked from among the sticks to foretell the lineage of kings-that-are-not-Macbeths. This mayhem evaporates as easily as it began with Macbeth back in bed. Magic. Profound.
Curiously, the Sleepwalking Scene somewhat misfired. Lady Macbeth was placed high on a platform that filled the width of upstage. Instead of the appropriate haunted vocal quality and ethereal movement usually invoked, the Lady seemed too “together,” too “present” to be believably losing her mind. She stopped and started her way across the catwalk, pausing to sing full front and pretty much full out with little suggestion of the usual fil de voce effect, even taking a lower option for the aria’s final phrase. Unlike the rest of the night, the scene lacked truthful immediacy.
Best for last: the choral singing was beyond praise or perhaps, parallel. Under the masterful tutelage of Robert Ainsley, the combined forces of the Richard Gaddes Festival Artists and Gerdine Young Artists proved once again they are a consistent model of excellence for all other opera choruses. Their intense dramatic commitment was only surpassed by the sheer beauty of their polished, idiomatic singing.
James Sohre