The Triumph of Time and Disillusion was composed in 1707 in Rome by the 22 year-old German composer Georg Friedrich H‰ndel. Opera was banned in Rome, the pontifical city firmly in the grips of the artistic terrors of the Counter Reformation, i.e. opera was banned. So Rome, never left wanting for the finer things, was reduced to bootleg opera, called oratorio. Some of its librettos were supplied by Cardinal Benedetto Pamphili (quite a few of his librettos not surprisingly are about Mary Magdalene). Note that Alessandro Scarlatti set the Cardinal’s The Triumph of Truth and Grace a few years before H‰ndel tackled that of Time and Disillusion.
Just like opera seria, distraught with the terrors of its heroes and heroines vacillating between inexorable forces (love and duty mostly), Roman oratorio provided polar opposing forces (pleasure versus truth as example) with no possible compromise. In the early 18th century resolution could only be death in opera seria while in oratorio the resolution was eternal life. Once the Counter Reformation dissipated opera seria did begin finding happy endings here on earth.
In the program booklet Polish theater director Krzysztof Warlikowski expresses his outrage at the dogmatism of this libretto (Time and Disillusion [essentially Truth] banish Pleasure while Beauty repents). With the orchestral overture stage director Warlikowski concocted on a full stage video scrim (screen) the sordid world of drugged youth’s indiscriminate sexual appetites. On stage for the next three hours a beautiful young woman struggles to emerge from this world. Bludgeoned by Truth she gives in to repentance. But, like opera seria where there is no eternity we watch her symbolically die. It is spiritual death at the hands of dogmatism. 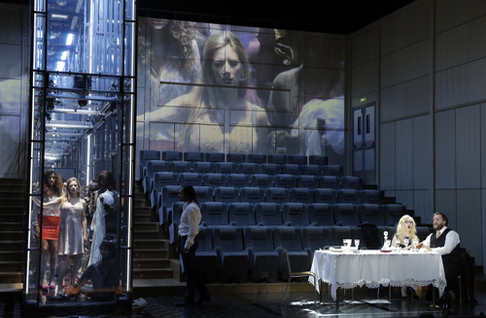 Beauty (in box), Pleasure (in shadow), Truth and Time (at table)
Watching this were 1500 or so mostly Christian souls seated in Aix’s bishops’ palace (the ArchevÍchÈ) facing the stage that was in fact a theater staring directly back at us, i.e. mirroring us. From time to time a bevy of young women in lurid party attire emerged from a transparent box (surely an abstracted disco-tech) to file into these stage seats to watch with us the battle taking place on the stage apron.
Like Warlikowski the young Handel was entranced by this battle and thus gave it the most beautiful music ever composed for the human voice. Time stood still while we reveled in beauty. Truth and pleasure fused into that sublime moment that was only dreamt of on the stage by Beauty. It was the triumph of art.
Director Warlikowski did take a moment to remind us that all of this artistic grandiosity is a bit silly. This was the intermission feature. Once again the full stage scrim fell and we watched a video of a most worldly man in supercilious discussion with a most wide-eyed young woman about ghosts (this video a comment on Pleasure’s just uttered fear that Beauty would believe in the purely imaginary heroes of truth, i.e. ghosts). [No doubt the actors were well known to the largely French audience, I had no clue].
Once again in this summer’s Festival, Aix has triumphed in its casting. Beauty was young French soprano Sabine Devielhe of pristine physical beauty, her face marred by clown face tears. She possesses a voice of riveting purity, platinum colored (i.e. an extravagant silver), a range that extending well above the staff upon occasion. Her final aria of repentance was spellbinding (as were all of her arias) in the splendid bleakness of its despair.
Matching in effect was a sassy Pleasure, sung by Argentine counter tenor soprano Franco Fagioli who as well soared above the staff in his final aria of banishment. Leaning against the transparent box he sank to the floor delivering wrenching tones of tragic loss, descending well below middle “C” into tenor range though never losing counter tenor color. The brash young Handel demanded the ultimate from his opera seria singers, the high Baroque in full force. This Trionfo‘s arias exploited the extremes of range and demands on technique that are seldom encountered in his London operas. 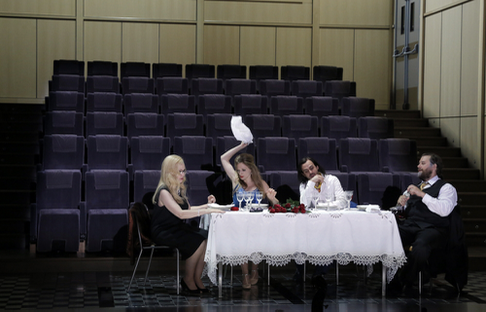 Sara Mingardo, Sabine Devielhe, Franco Fagioli, Michael Spires
American tenor Michael Spires showed off his resplendent tenorino as Time, bringing throaty authority to his tone, soaring to threatening insistence in his high “D”’s. He was dramatically matched by the powerful voice of Italian contralto Sara Mingardo who brought a blatant irony of false authority to Disinganno (Truth), the attribute that so intrigued stage director Warlikowski.
All four singers converged in the magnificent quartet early in the second act that were it more widely known by the opera public would be known as one of the great monuments of operatic quartets, rivaling, even surpassing the rank and fame of the Rigoletto quartet.
Of equal stardom in this extraordinary evening was the French early music orchestra Le Concert d’AstrÈe and particularly its founder and leader Emanuelle HaÔm whose sculpted conducting forcefully and fully rendered the muscular, quite architectural components of Handel’s Baroque orchestral score. Of deep complicity were the several duets that violinist David Plantier, cellist Felix Knecht and oboist Patrick Beaugiraud effected with the singers. The large, un-conducted continuo offered kaleidoscopic colors to the recitatives and scenes, recalling somewhat the concept of Monteverdian and Gluckian accompanied speech.
See for yourself — Il Trionfo del Tempo e del Disinganno on www.culturebox.fr.
Michael Milenski