It was inevitable. The Aix Festival has been grooming British theater director Katie Mitchell to take on the foggy atmospheres of this Debussy thriller for years. Dinner table after dinner table, bedroom after bedroom, slick theater to be sure (Written on Skin [2012], The House Taken Over [2013], Trauernacht [2014], Alcina [2015]), Mme. Mitchell is greatly admired for finding all human tension to be present in a domestic tea service.
Pelleas et MÈlisande is undoubtably meant to be her masterpiece. She found Maeterlinck’s murky, hazy universe in the dream, rather nightmare of a bride alone in a hotel room. It was not always clear how these pre-conscious meanderings fit together (but of course the first thing you learn about dreams is that they don’t and that’s the fun). Like Maeterlink’s MÈlisande we did not know how or why this bride got there. But there she was, center bedroom in her dream for three and one half hours (yes, right there for every second of those long, very long hours).
Given it was the MÈlisande psyche that imagined her own particular universe she was rather more pro-active than Maeterlinck’s symbolic lost soul. Mme. Mitchell’s MÈlisande made the men in her life react to her and watched the men in her life react to her (she was a double image [yes, there were two of them], herself and she who sees herself). It is possible, maybe probable that the three men in her dream [Arkel, Pelleas and Golaud] were all one man — her absent groom, and maybe there never was one anyway.
Certainly Mme. Mitchell with her dramaturg, Martin Crimp had all this worked out to the nth detail. Mme. Mitchell’s universe is very precise indeed. Including the a vista genitalia of Pelleas. 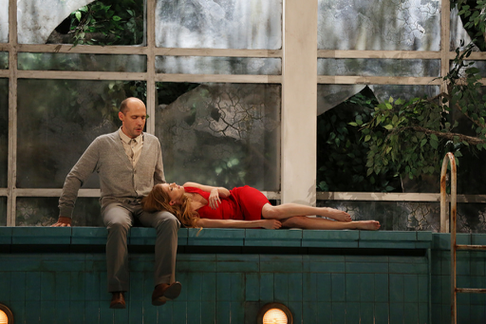 StÈphane Degout as Pelleas, Barbara Hannigan as MÈlisande
The greatest of the many glories of the Aix Festival (besides, well, going for broke in many of its stagings) is the casting. Shapely Canadian soprano Barbara Hannigan was the MÈlisande (the one who sang), existing much of the evening in her bra and panties, executing some spectacular physical theater moves from time to time (among other impressive accomplishment by Mme. Mitchell’s movement collaborator Joseph W. Alford), like a backwards summersault that left her contorted derriËre aloft for extended moments, jumping animal-like onto Golaud’s back, etc. Her light and bright soprano illuminating her dreams in perfect French with impeccable musicianship. A total, spectacular performance.
Matched in every way by the Pelleas of French baritone StÈphane Degout and the Golaud of French bass-baritone Laurent Naouri. Both artists are of similar physical types that could make believable Maeterlinck’s half-brothers. Very male, handsome and physically fit both men were vocally very fit as well, the dark hued voice of Pelleas well able to scale the extreme range and emotional heights of this enigmatic force (Mme. Mitchell endowed him with the autistic nervous tic — at least in Melisande’s perception). Golaud in a black hued voice exuded every excited nuance of Maeterlinck’s most human and balanced and obsessive male force, creating in this staging finally a beautifully sculpted, deep and very moving pathos. 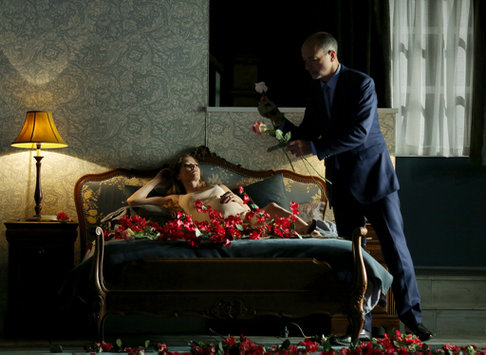 Barbara Hannigan as MÈlisande, Laurent Naouri as Golaud
Parallel to Mme. Mitchell’s dream was Esa-Pekka Solonan’s descent into the sonic depths of Debussy’s masterpiece of orchestration. London’s Philharmonia Orchestra is one of the world’s fine ensembles, well able to manufacture a suave elegance for Debussy’s woodwinds, well able to ascend gracefully to fortissimo heights, and achieve shattering moments with no loss of sonic composure. It was an absolutely magnificent orchestral evening, seats in the mid section of the flawed Grand ThÈ‚tre de Provence offering a balanced if sometimes harsh sound, the voices on stage disarmingly amplified by the round shape of the theater.
The Philharmonia Orchestra is known for the warmth of its strings, and indeed they are, and the elegance of its winds. Conductor Salonen finds everything he needs to create the frigid warmth of his symphonic sound. His operatic emotions are well defined and highly considered, his great big moments are absolutely contained. Salonen’s lush symphonic poem ignored the unanswered questions and the mysteries of the story, remaining abstractly one dimensional.
This gifted maestro did not seem to care what occurred in those little scenic boxes up there on the stage. Nor did many of us.