Eva-Maria Westbroek (Sieglinde), Evelyn
Herlitzius (Brünnhilde), Ekaterina Gubanova (Fricka), René Pape
(Wotan) and Mikhail Petrenko (Hunding) sung on a scorching summer sunday under
the guidance of Valery Gergiev and his Mariinsky Orchestra. Every singer
produced sensational showstoppers. With such a cast a production is better left
away.

The magnificent tenor Andreas Schager charmed the disappointed audience
expecting a sick Jonas Kaufmann. With a touch of theatrical flamboyance Schager
includes the audience intimately in his performance. As a singer he gives each
of his characters his all. I have seen him go at it as Tannhauser in Ghent, Max
in Der Freischütz in Berlin, and he was a major high point in
Leipzig’s Ring Cycle last May, where he blew up the stage as Siegmund.
Schager has also tackled Tristan in St. Petersburg with Gergiev, this
evening’s conductor. His debut at the Met in NY is already programmed for
the near future. 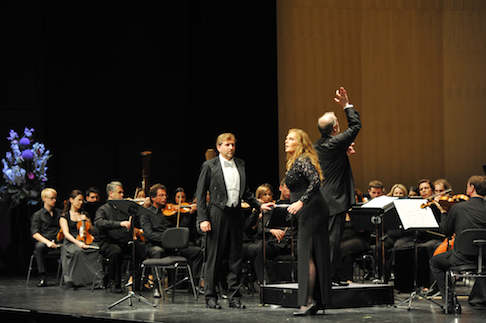 Tonight, he returned as Siegmund for the Festspielhaus Baden-Baden, who
managed to steal him away from his rehearsals for Der fliegende Holl‰nder in his debut at Bayreuth. He again convinced as the overconfident hero. His performances have the sense that it might be his last.

From the moment Schager arrived on stage, the Austrian Adonis turned on his
charm and dazzled. He has a soulful voice and big personality always intent on
seducing the audience. In Leipzig, the Gewandhaus Orchestra was located in the
pit, so he did not have the challenge of overcoming orchestral volume, a
challenge he overcame most of the time with Gergiev and the muscular intensity
of his body-builder Mariinsky. The challenge of balancing the volume was one of
the few things that could have been more refined. But that was in
Gergiev’s hands.

Schager’s chemistry with Westbroek was extraordinary. They elevated
their duet to more than the sum of its parts. Their subtle acting and minimal
gestures added great drama to this first act. Add to that the rich strings,
swooning in their romance, and you were truly swept away as a listener. Schager
and Westbroek’s fiery, passion moved me to tears. Epic was the revelation
of his true name as first Sieglinde and then her brother exclaimed
“Siegmund!”. It sent shivers down my spine.

Ms. Westbroek displayed her captivating acting skills, presenting Sieglinde
highly expressive with great emotional authenticity, including her rich,
relentless vibrato. She infused her declaration of love for her brother with
generous exuberance. Later she contrasted this mania as she exuded a fearful
malaise before Siegmund’s confrontation with her husband Hunding. A
complete natural, her entire performance seemed hardly difficult, adding an
almost laidback quality to the performance. How does she do it? 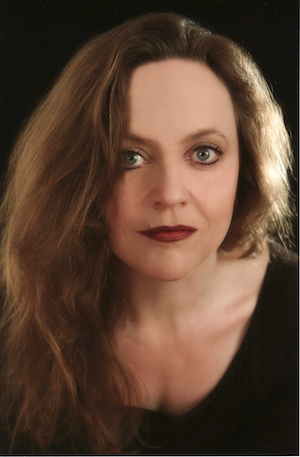 Mikhail Petrenko must be admired for his flawless diction in German. You
couldn’t detect his Russian accent at any point during his portrayal of
Hunding, full of disdain and anger.

In Act II, Ekaterina Gubanova stole the show as the elegantly puritan and
utterly disgruntled Fricka. Her voice commanded the stage, and she put Wotan to
shame, in the best of ways, as Pape held his own. The climax of Act II had five
world class singers on stage, and made for one of the most star-struck moments
in opera that I have experienced. And one subtle moment of if-looks-could-kill
emerged as Fricka arrived and Brünnhilde’s cheer diminished. That
slight moment of eye-contact expressed volumes.

René Pape formidably portrayed Wotan with a sad,
almost hopeless, resignation, as a leader at the end of his rule. In his
interaction with Fricka in Act II, he displayed an authoritarian vocal prowess,
demanding respect, yet still deeply human, perhaps too much so as God.

In Act III, Brünnhilde’s eight sisters threw themselves into
Wagner’s vocal acrobatics as Gergiev turned the first half into a fully
blown adrenaline rollercoaster. Yet it was the interaction between Wotan and
Brünnhilde that left me helplessly sobbing, as the father cast his
favorite daughter out of Valhalla. Such devastation I have rarely experienced
from a stage performance. And while Wotan remains a bit distant, Evangeline
Herlitzius turned me into an instant fan. Her Brünnhilde convinced in her
virtuous optimism, but also displayed great dread for Wotan’s
retribution. The singers elevated the performance to mythic heights.

In Act II Evangelina Herlitzius gave hint of what was later to come. But in
Act III with Wotan she switched with seeming ease from upbeat enthusiasm, to
great despair and all without too much theatricality. Her interaction with her
disappointed father turned out to be the heartbreaking, gut wrenching finale
that was necessary to conclude such a superlative concert.

Gergiev brought out the exhilarating passages of Wagner’s score. Brass
sounded consistently brilliant or subtle with finesse in their simmering,
swampy passages. Gergiev sustained a suspenseful momentum. He built up the
Wagner’s tension effectively and knew to release it at the right
moments.

With air conditioning, comfortable seating and such a stunning cast and
orchestra, the question becomes…do you really need to still go to
Bayreuth? Probably, because with a cast like this, it will be a long time
before I will hear another so superlatively sung Die Walk¸re.