This seeming limitation instead proved a liberation for ingenious director Joachim Schamberger. The mutli-talent Herr Schamberger also designed the effective set and the non-stop, virtuosic projections. The unit set is intended to be an overall suggestion of a prison, a metaphor of how society in trapped in certain behaviors, and unable to break cycles of oppression.

As such, it consisted of a semicircle of latticed metal doors above which rose a prison ‘wall’ that served as a perfect receptacle for the combination of still image and film projections. These most often began as structurally accurate suggestions of the actual physical locations, then morphed into artwork of the period relative to the topic, and finally included some very telling psychological reflections.

When Scarpia lusts after Tosca as the parishioners intone the Te Deum, the video above the prayer services is of the imagined conquest of Tosca, wherein a chat room-like close up of the actual actress is languidly undoing her bodice as she projects inviting glances. This was the most profane juxtaposition I have ever seen of Scarpia’s morally bankrupt character balanced against sincere religious fervor. 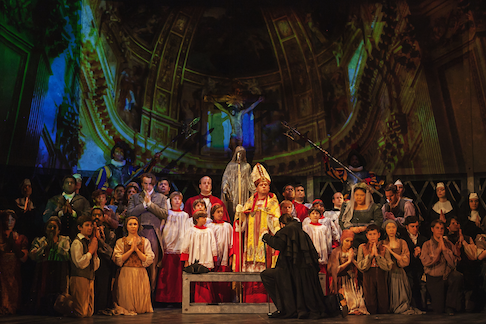 There were other startling images as well, such as blood running over cityscapes during Cavaradossi’s torture. But my favorite might have been the serenity of the imposing Castel Sant’Angelo, projected on the show scrim, which got invaded by a herd of sheep as the Shepherd was picked up in a spot behind the scrim jangling the bells he carried in his hand. What wonderful, telling imagery!

If this sounds highly stylized, it was. Another large part of the show’s success is the dynamic lighting design by David Martin Jacques. As expected, there were well-executed pools and areas of lighting, with good uses of color and textures. But Mr. Jacques also took some real chances: during moments of crisis and decision for major characters he punctuated them with schizophrenic bouncing of spots that were an apt comment on the emotional turmoil of the situation.

The final moments of the show were perfectly calibrated. On this flat floor, one level set, I was wondering how on earth Tosca was going to jump to her death. Well, Team Tosca had a stupendous effect in mind: Tosca parted the center walls floor to ceiling, revealing a white shaft of light, ran a few feet onto a short platform, turned and hurled her final phrase. . .and fell backwards into the abyss like Sigourney Weaver in Alien 3! A stunning surprise. 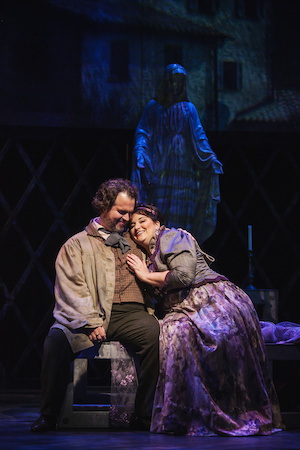 Jonathan Burton as Cavaradossi and Alexandra Loutsion as Tosca

The costumes from Utah Opera looked handsome, and Tosca’s Act II gown, especially designed by Dana Tzvetkov was rich and effective, especially for its red, removable overlay, its flowing white under gown, and a diaphanous scarf. Set pieces were limited to multi-purpose, modular, industrial looking platforms, tables and chairs, a writing stand, and a white marble statue of the Virgin Mary.

I have to say, this was the funniest Tosca I have ever seen. You read that right. The director found willing participants with the Sacristan, Cavaradossi, and yes, even Tosca to create intentionally humorous interplay. I am not sure I liked it all, but I am not sure I didn’t. I can tell you that the premiere audience Ate. It. Up.

Perhaps, that initial humorous tone does not instill the usual nobility in the great tempestuous diva, nor does it presage the immense tragedies that are looming. The Sacristan suddenly kneeling to Scarpia with a pained ‘take,’ Mario playfully coming on to Tosca in their first duet, Tosca being restrained as she threatens to slash the l’Attavanti portrait (which she later does in fact do), all were played with comic sensibilities but also with commendable honesty. Would Floria and Mario actually start to get intimate on the floor of the chapel? Director Schamberger thinks so.

He does not shy away from the attempted rape in Act II, having Scarpia suggestively begin to disrobe as he defines Tosca’s prezzo. In the moments before Vissi d’arte, he actually forces himself atop her on the floor, tearing open the red over dress, leaving Tosca to begin the aria, flat on her back, legs tangled in her petticoats. Pretty intense stuff. 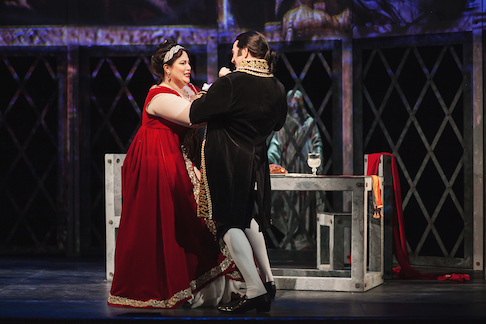 Alexandra Loutsion as Tosca and Michael Mayes as Scarpia

When Scarpia finally crosses down stage to have her, his white shirt open baring his handsome torso, she turns upstage and executes as fierce a stab as I have ever seen, jolting him into the air, before he sinks on bench to be slashed at again and again. Visceral excitement that is pure Puccininian ‘shock and awe.’

Not every idea lands. The Te Deum looked crowded with everyone center stage. And the show began in silence, with extras entering from the house to survey the stage and its pile of rubble. They decide to clean it up and reconfigure the elements to create the first scene. A woman sees a red scarf (Tosca’s) and picks it up, sending (Cavaradossi’s) paint brushes scattering from with it.

The first loud note then intones in the orchestra and they all run off in terror. This rubble turns out to have been the Act III set, and the red scarf was Tosca’s, that artistically fell from the fly loft after she jumped. The show ends with these contemporary extras coming back to the fringes of the action, looking confused. Who are these people? Tourists? Critics? The Puccini Police? Your guess is as good as mine. Or as good as the folks at the B and B where I stayed, who also were unable to suss it out over breakfast.

John Baril conducted a stylistically accurate, theatrically vivid account of this thrice-familiar score. The orchestra responded with real fire and commitment. The divisi celli were especially vibrant and pulsing with emotion. The clarinet solo work was impeccably haunting. Whether playing soli or tutti, Maestro Beril inspired these fine players to thrilling results. He did on occasion allow soloists to indulge in some held high notes that were long enough to give Corelli pause, but that is a minor consideration. His reading had veristic sweep as well as minute detail. Aaron Breid’s chorus was well-schooled and full throated. 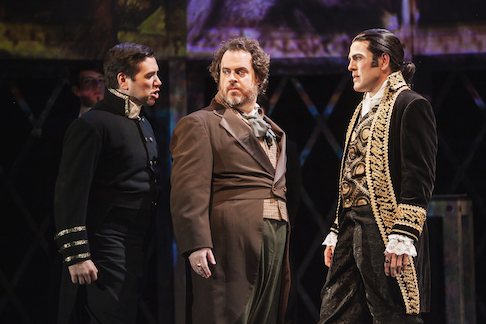 Peter Lake as Spoletto, Jonathan Burton as Cavaradossi, and Michael Mayes as Scarpia

Alexandra Loutsion is making an auspicious role debut in the title role. She has a warm, round, plush sound, that has ample presence in all registers. Ms. Loutsion also has a secure, ringing high register that can ride the orchestra with impressive ease, but she can also scale back to regale us with meltingly beautiful sotto voce singing. Since there were some unorthodox elements to this character’s interpretation I will be interested to follow her development in the part. Although she is herself young, at the moment her vocal approach seems better served by the tortured, mature turns of events of Acts Two and Three, than the unusually coquettish girlishness of Act I.

I had greatly enjoyed tenor Jonathon Burton in last summer’s Fanciulla in Des Moines. Of course, Cavaradossi is a whole other kettle of fish, but Mr. Burton acquitted himself with distinction. He invests a great deal of meaning and emotional weight in his heartfelt singing. He certainly has all of the thrilling money notes, even though one or two lacked the ease of production that characterized his other vocalizing on this evening. It is when he sings in mezzo forte that he can grab your heart and not let go. O dolci mani was beautifully, winningly intoned.

Michael Mayes made an overwhelming impression in his debut as Baron Scarpia. His is a powerful, booming, dark baritone that has a searing presence. Mr. Mayes is also a highly imaginative singer capable of great diversity of effects. I have never experienced quite such a sinuous Va, Tosca, so laced with menace as he seemed to taste her name as he uttered it. He not only had the reserves for the Big Sell moments, but also could command a skillful legato. As a Las Vegan, I can paraphrase the Cosmopolitan’s promo when I say Mr. Mayes’ colossal Scarpia is just “the right amount of wrong.”

The thrilling, full-voiced sing of all three principals is laudable, applaudable, and admirable. I would only caution that sometimes, pressing volume for dramatic effect can invite strain or even errant pitch. When you strive to sing ‘balls-to-the-wall,’ well, in this theatre at least, the wall may be closer than you think!

Lanky Donald Hartmann was all gangly limbs and orotund delivery as he gave us a Sacristan that was all about the comedic core of the character. His was a well-rounded and thorough embodiment of the doddering meddler, although occasionally his histrionics stole focus. Stephen Clark’s stalwart baritone gave great urgency to a well-sung Angelotti. Peter Lake’s smooth, attractive baritone made us wish Puccini had given Sciarrone much more to sing. The fresh-scrubbed Adam Richardson lent his pleasing tenor to a sinister portrayal of Spoletta, and he made the most of his scenes. Ashley Fabian was the sweet-voiced, utterly natural sounding Shepherd.