Full disclosure: I have seen more first tier productions of this piece with world class stars than perhaps any other opera. Every time the opening bars strike up, memories of Sills, or Netrebko, or Kabaivanska, or Swenson, or Malfitano, or Grigolo, or Villazon, or Kraus — my God, Kraus! — rush in. I have a deliriously happy history with this piece. As I settled in to my seat at DMMO, I resolved to let them make their own case for the redoubtable, delicate gem that is Massenet’s Manon.

It has to be said that Sydney Mancasola was luminous in the title role. She sports a secure, silvery soprano of enormous flexibility, wedded to an unfaltering musicality. There is a generous dash of humanity in her portrayal and she is possessed of a charismatic presence in her well-rounded assumption of a richly complex personality. Ms. Mancasola is completely believable as the young girl, in fact she is perhaps too giggly. It is as the developing adult that she confronts some limitations of vocal heft and coloring. She is not yet able to fully convey the womanly, seasoned maturity of the later scenes. But she is young, she is extremely gifted, and she will only grow.

As her lover Des Grieux, Joseph Dennis has the right sized tenor and he sings extraordinarily beautifully, especially at mezzo forte. When he presses the top and covers the tone, Mr. Dennis muscles up just a bit although he does get wholly acceptable pointed forte notes out. His lyrical, introspective Act II aria found him at his best, offering his most meticulously controlled singing all night. This is such a daunting role, and if Joseph has not quite yet mastered all the tricky gearshifts between voix-mixte and full throttle that this part demands, he nonetheless made a substantial impression. 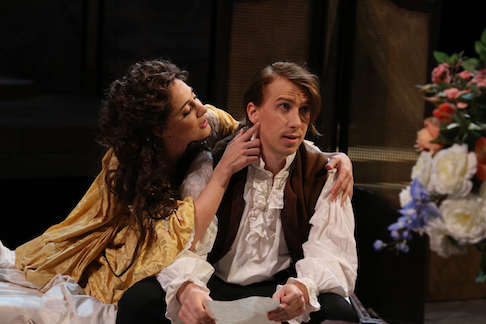 Michael Adams as Lescaut sported a naturally warm and engaging baritone, but he too, slightly covers so that when he goes up the voice has a tendency to fall back instead of pinging forward. Mr. Adams certainly cuts a handsome figure, although he mugged pretty shamelessly in Act II, and he seemed to really enjoy playing with his cascading hair. Maybe he was a little “too” much of a dandy to be as likable as he should/could be.

The accomplished conductor David Neely had a somewhat flat night in the pit. The opening statements were dry and correct, instead of sparkling and anticipatory. This rather clinical beginning thwarted stylistic engagement for a couple of acts but then began to settle into a more enthused, informed, expansive French style.

There is much about Manon that starts out heady and bubbling, but ultimately it is a rather gentle tragedy as things go, certainly not Offenbach’s La Grande Duchesse de Gerolstein. The broad generalities of the first fourth of the evening did not set-up (as they must) the powerful set pieces and confrontations in the following acts. 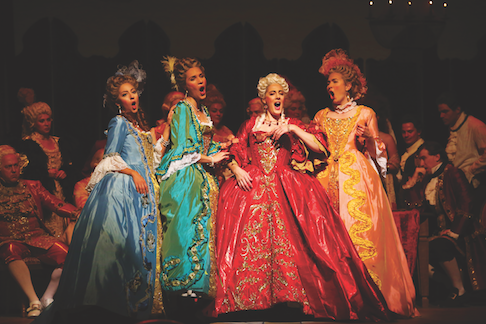 Director Kristine McIntyre’s blocking was often excellent, always competent, but sometimes just too darn’ clean as when the chorus sits down almost en masse in the Cours la Reine scene. Or, too vague as in the very opening when we can’t quite assess who is who, or what is where. The wonderfully detailed business of the lovers cavorting on the bed was preceded by an odd separation of the would-be lovers as they sing about going to run away together, all the while remaining resolutely apart.

Manon and Des Grieux are directed to do mostly all of the right things and Ms. McIntyre’s business has been very well thought out and conscientiously executed. But curiously, for all of Ms. Mansacola’s and Mr. Dennis’s strengths and hard work, for all of their going through very uninhibited romantic motions, no true sparks are ever really struck, just suggested.

I am a firm admirer of set designer R. Keith Brumley’s skills, but they seemed a bit muted on this occasion. The angled rows of painted screens were professionally executed, and the rotating of the panels allowed for swift changes. But they were oddly sterile considering the sumptuousness of the period and lushness of the score.

Indeed, in the beginning, it was difficult to define the space, and to know where the referenced elements were supposed to be imagined. The addition of drape panels in Act II were airy and diaphanous when it seemed that the lovers should be trapped in a garret or down at heel apartment. Thereafter, Mr. Brumley scored with some wonderful effects, never less so than with the beautiful grill and gate for St. Sulpice which provided a very effective environment.

Barry Steele’s lighting design was another curiosity. This gifted illuminator provided an uncharacteristically blunt design, with lighting cues mostly abrupt and lacking atmospheric specificity. This was obviously a choice, but arguably not often a well-considered one. One excellent effect was having white votive lights placed on the stage’s perimeters for the Cours la Reine scene, and then having them cross fade to blood red for the passions of St. Sulpice, augment by red hanging votives.

Conversely, Roger Kirk’s lavish, character-specific costumes were just what the piece required, and were the most wholly successful design element. I wondered if Manon’s loud, sequined gold Cours la Reine gown might have been just a bit on the gaudy side, but, hey, she does dominate the scene. Never you mind, Mr. Kirk provided wholly splendid attire.

Eh bien, mes amis, at the end of la nuit, this was a commendable convocation of top talent and good intentions. Manon was a concerted and admirably conscientious effort. It just ultimately seemed to be not quite the right one.