Arguably the greatest asset of the performance was David Neely’s sure handed, fleet-footed, scherzo-like approach to the master’s final stage work. Maestro Neely drew extraordinary playing from his instrumentalist, and they reveled in every sparkling orchestral effect. Not to imply there was anything frivolous about his approach, for Mr. Neely also finds weightiness when required, lending even more pomposity to Va, vecchio John, more gravity to Ford’s tortured aria, and more sheen and shimmer to Nanetta’s forest arietta. Has that famous orchestral trill ever had more sparkle and fizz, that closing fugue more impetus and insouciance? Thanks, Maestro, for buoying our spirits and ravishing our ears.

It didn’t hurt his efforts to have a formidable cast on his team. Wayne Tigges, in a role debut, is already a tremendous Falstaff in every way. His imposing physicality houses a big, pointed voice that rang out in the house as he blustered, boasted, and bellowed with ample reserves of power. That said, Mr Tigges was also capable of a highly polished characterization that found nooks and crannies and nuances that he was able to convey with conviction and subtley. Indeed, his might just have been the most richly detailed Falstaff of my experience, summoning real pathos in his poignant Act III aria. Occasionally, his no holds barred approach may have caused the voice to rasp, and a few times some pauses and pacing may not have exactly been Verdi’s, but he is destined to become a much sought after Sir John.

As Ford, Edwards Parks revealed himself to be a fine Verdian indeed, and boy do we need him now. His secure technique and imposing, warm delivery were marked by good squillo and excellent legato. His delivery of E sogno was musically potent and dramatically rich. Mr. Parks also managed to find some variety in this tight-ass role, interacting playfully with his wife at selected instances. As said wife Alice Ford, the always winning, effortlessly beautiful Kelly Kaduce scored yet another success. Ms. Kaduce’s acting and especially, her comic sense are without peer on the operatic stage (as Beverly Sills might say: “Lucille Ball with high notes”). At the performance I saw, her upper voice began a little fuzzy in focus, but she soon warmed to her task finding the appealing, silvery glint I remember as the show went on. 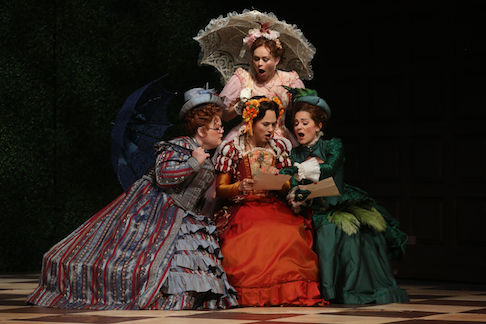 She was well paired with another youthful “merry wife,” Megan Marino as Mrs. Meg Page. Ms. Marino is a real company asset, her luxuriant mezzo and energetic participation for once made Meg an important and equal co-conspirator, not just a requisite space filler. I can’t tell you how often I have seen this role under-cast or under-performed, so it was a real pleasure to experience Ms. Marino’s solid achievement.

Maria Zifchak was a wonderful Mistress Quickly, with a wholly fresh take. Hers was not the chest-voiced, barrel-toned force of nature sometimes presented by mezzos “of a certain age.” No, Miss Zifchak prefers to be sexy and sassy over bossy and booming. Her poised, controlled, sinuous singing was in perfect service to a well-considered characterization that she served up with obvious relish.

Deanna Breiwick’s Nannetta represents a dream match-up of role and voice. Not since the great Benita Valente have I heard such melting singing in the part. Ms. Breiwick’s finely spun upper register was floated with utmost skill and effortless beauty. As Fenton, young Jack Swanson also has a pure, warm, lyric instrument, which he wisely does not try to push beyond its limit. His sweet vocalizing was somewhat at odds with Fenton’s urelenting horndog behavior, but we will get to that.

Both Bardolfo (Ryan Connelly) and Pistola (Matthew Scollin) were absolutely committed and over-the-top. Mr. Connelly is an imaginative and playful comprimario on the rise, and Mr. Scollin has a pointed bass-baritone used with solid conviction. Dr. Caius finds a worthy interpreter in Chris Carr, although he alone seemed trapped in a stereotypical, doddering physicality. 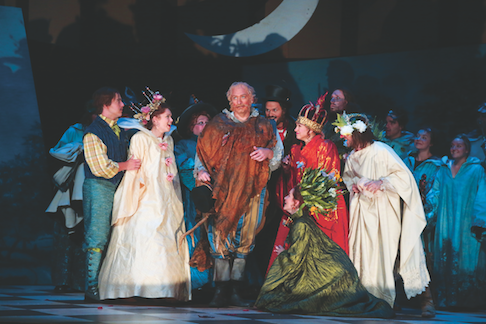 Director Tomer Zvulun achieved much to admire and the responsive audience clearly appreciated his efforts. I found the staging quite apt, often clever, and unusually carnal. And why not? The whole tale hinges on pursuit of love-making, and fears of wives being seduced into infidelity. If this overt physicality interestingly informs the older personages in the show, I found that by also imposing that on Fenton and Nanetta, their randiness deprived the show of its balancing sweetness.

Too, there were a few (but only a few) instances of lilies getting gilded. Or jokes being given away too soon. It is far funnier if we don’t get tipped off that Caius is inadvertently marrying Bardolfo. It also strained credulity that Ford and Caius mercilessly batted, pushed and bullied Fenton. These brief distractions were offset by moments of real brilliance like the chase scene in pursuit of Falstaff as he is caught mid-faux-seduction. The bustling stage was a riot of beautifully controlled movement. And the entrance of the fairies through the audience was a splendid effect.

Erhard Rom’s set design provides the piece with a handsome and atmospheric playing space, as adaptable as Shakespeare’s Globe Theatre. Two heavy, dark, oak-paneled walls flank the stage, able to close in or angle out as needed to create the interior of the inn (with addition of furniture), the exterior (with addition of the “Garter Inn” shingle), the Ford household (with emphasis on the upstage window) or the forest (with addition of three huge cockeyed oil paintings of stylized trees). I loved the placement of the double sided portrait that got changed out with Sir John on one side and Verdi on the other side. After the fat night is unceremoniously dumped in the river, a trashed version shows up in Act III. And the Advent calendar reveals of compartmentalized plotters was a delectable touch.

Mr. Rom also used a Fantastick’s-like act curtain on which was copied the title page of Verdi’s vocal score for Falstaff. This proved a clever touch and allowed the show to start with a silhouette of a backlit Fenton and Nanetta kissing, only to have them scatter when the curtain reveals them by dropping to the floor. Lighting designer Barry Steele repeated this effect perfectly timed when the two are caught kissing in the script. Throughout the evening, Mr. Steele deployed effective and subtle lighting shifts and made excellent use of tight specials, with the fairyland greatly enhanced by the starry lights. Vita Tsykun’s handsome, well-tailored, often highly colorful costumes seemed to belong to Maestro Verdi’s era rather than having the usual Elizabethan look. Nonetheless, they were lovely to look at, and defined the social strata of the participants. Sir John’s outlandish visiting costume was alone worth the price of admission.

This great opera reveals new delights and greater depth with each encounter, and Team Falstaff is to be commended for breathing yet more fresh air into this enduring masterwork.