There was much fine vocal talent on display, but the singers had to contend with some unhelpful direction and design. Director Richard Gerard Jones, a JPYA
since 2015, and Lighting Designer Nick Havell decided to give all the scenes a ‘modern’ spin with a ‘radical’ edge. An eight-foot black wall served as a
set and props were minimal – a transistor radio for Varvara and Kudrj·ö to bob along to, a wheel-chair for Mireille to slump into, an armchair to support
the fast-fading Mimi, a microphone for a karaoke-rendition of the Champagne Aria. Certainly, stagings need not be lavish to make their mark – companies
such as Opera Holland Park and Bampton Classical Opera repeatedly prove that invention can triumph over budgets – but the grungy grimness of these designs
was dispiritingly unimaginative. Lighting was of the extreme chiaroscuro type with naked bulbs (starlight for the lovers’ nocturnal tryst in K·t’a
) and dazzling strip-lights (glaring painfully from the lowered lighting rig at the close of Onegin) serving to blind rather than illuminate. Too
often characters were half in darkness, which I suppose did fit in with the general ‘twilight zone’ ambience. 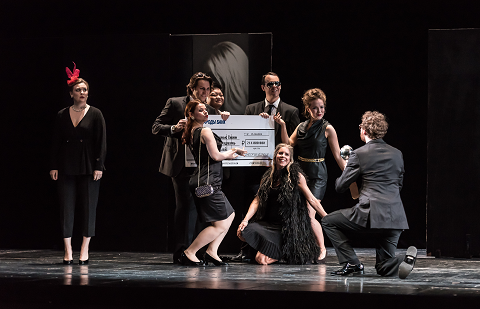 The settings, and costumes, were dubious, too, in that they didn’t seem to take heed of anything that the protagonists might be singing about. The tender
romance of the night-time rendezvous in K·t’a was blunted by Varvara’s far too revealing hot-pants. Mireille did not seek her wounded lover in the
church of Sainte-Maries-de-la-Mer, but found herself in a mental asylum, dressed in a white sack and dumped, fairly unceremoniously, in a wheelchair while
two medics looked on aghast at the vocal antics of this would-be suicide. Prince Gremin’s ball was a flashy charity fundraiser complete with paparazzi to
snap the posing celebrities, and the somewhat coarse ambience was at odds with the grave sincerity of Gremin’s subsequent avowal of love for Tatyana. CafÈ
Momus was a pole-dancing club – or so the animated neon silhouettes which prefaced the final scene from La bohËme suggested: they drew an initial
whoop but the flickering images, on a loop, quickly became nothing but a distraction. Worse still, they reappeared half-way through Orlovsky’s ball, though
there was nothing riotous, or anything festive, about the revelling.

However, despite the fact that the black wall, which radically foreshortened the ROH stage, made the acoustic unsympathetic to the voices the singers
displayed considerable talent, with the ladies perhaps just having the edge.

Vlada Borovko, who the evening before had sung the role of Xenia in the ROH’s Proms performance of Boris Godunov ( review), was an impassioned Kat’· Kabanov·, demonstrating great power at the
top and a lovely gleaming timbre. Kat’·’s innocence and love were equally credible. Borovko received praise when she made a role dÈbut when she stepped
into Violetta’s shoes at short notice in March this year, and I look forward to hearing her sing Mademoiselle Jouvenot (Adriana Lecouvreur) and Giannetta ( L’elisir d’amore) next season. Emily Edmonds was a
vivacious Varvara and as Prince Orlovsky she got the party going with a swing. Edmonds won acclaim in her native Australia before joining the JPYA
Programme in 2015 and one can see why: her mezzo is full and sensuous, and she has sparkling stage presence. Her performances next season, which include
Kate Pinkerton (Madame Butterfly) and Tebaldo ( Don Carlo) will be keenly
anticipated. 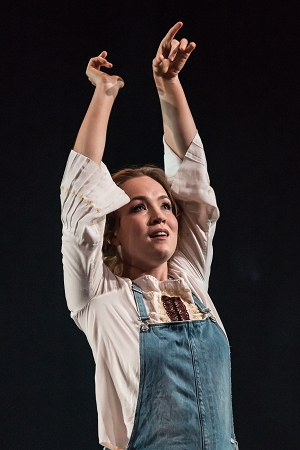 There is currently a quartet of Australian JPYAs, and soprano Lauren Fagan shone as Gounod’s Mireille, despite having been cast as a deluded, self-harming
depressive. Her stunningly rich tone and vibrant timbre rose above the incongruous design and later, as MimÏ, she showed that she has range of colour too.
She deserved praise for showing forbearance with the directorial quirks in the latter excerpt too, whipping an oxygen mask from a carrier bag and
convulsing violently during in MimÏ’s death throes. Despite a pre-curtain announcement that Jennifer Davis was under-the-weather, there was no obvious
effect on her singing and she was an open-hearted Tatyana, her soprano unforced and rounded, and a bright Adele in Fledermaus. Davis is cast as
Ines in next season’s Il trovatore and as Arbate in Mitridate, re di Ponto. 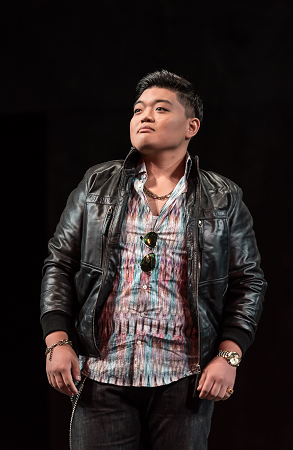 Among the men, Australian baritone Samuel Dale Johnson stood out as a firm-voiced Rodolfo and was joined in the ‘garret’ by David Shipley’s Schaunard and
Samuel Sakker’s Marcello for a tacky take-away beside a needle-light Christmas tree and a feeble electric bar-heater. Sakker, the fourth of the
Australians, also had his moment in the spotlight during the run of Traviata earlier this year, stepping in as Alfredo when Albanian tenor Saimir
Pirgu was struck down by a last-minute illness. He has a resonant tenor and appealing tone but he’s not a natural stage animal and took a while to settle
as Boris in the scene from K·t’a Kabanov·. In contrast, David Junghoon Kim was an ebullient and strongly characterised Kudrj·ö. Kim and Sakker
share the role of Ruiz in the double-cast Il trovatore next season. 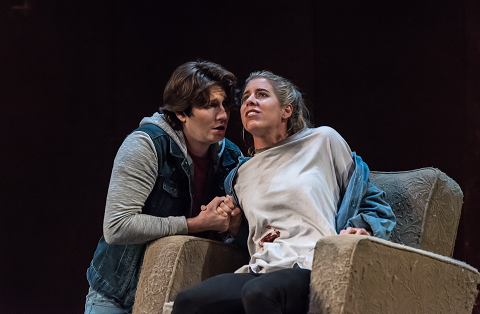 James Platt – who, like Borovko, sang in the previous evening’s Prom performance (Border Guard) – injected some much needed gravitas into the Eugene Onegin excerpts. Tall and imposing, he was an impressive Prince Gremin and had the low notes for Gremin’s declaration of love, descending
smoothly to the bottom. No wonder Tatyana threw her arms around him in a tight bear-hug. Yuriy Yurchuk has a sonorous baritone but his brief turn as Onegin
didn’t afford much opportunity to show it off. I admired Yurchuk’s performance as Angelotti in January this year ( review) noting that he used ‘his lovely tone to garner our sympathy’, and his
moment came in Die Fledermaus, as the elegant Dr Falke calmly invited Orlovsky’s revellers to treat each other as ‘Br¸derlein und Schwesterlein’.
There will be several chances to hear Yurchuk at Covent Garden next season, as he performs Schlemil (Les Contes d’Hoffmann), Baron Douphol (La traviata) and Prince Yamadori ( Madame Butterfly).

The fine singing was complemented by the crisp playing of the ROH Orchestra conducted by Paul Wynne Griffiths, Paul Wingfield and Jonathan Santagada (the
latter two are former and current JPYAs respectively). Fledermaus’s Adele tells us that ‘Champagne washes down all sorts of things sometimes, So
wise monarchs never let, their people go thirsty’. On this occasion it was the fantastic music-making which was the spoonful of sugar.