On July 15 the Arcanto Quartet, artists-in-residence at the Aix Festival, opened its program with the first and second four voiced fugues of the 14 fugues of the Art of the Fugue, the second fugue delighting in the dotted rhythms of French Baroque dance. This opening sequence of fugues concluded with the ninth fugue, a lively, double subject exercise rendered even more complex by invertible counterpoint.
In exquisite straight tone the four voices of the quartet fought elegantly for attention, converging finally and almost incidentally in the first fugue, then converging staunchly in the third fugue, these four consummate players in absolute control of the the most mature of fugal machinations.
The program continued with the 18 year-old Mendelssohn’s first string quartet that the composer prefaced “Is it true that you wait for me in the arbor by the vineyard wall?” The structures of this late-Beethoven inspired work dissolved into youthful sonic atmospheres of seasons, of light and shadow and plumbed the mysteries of nature and its magical forces in a myriad of colors and textures, the four voices of the quartet now one in infinite gestures of sentient sounds. 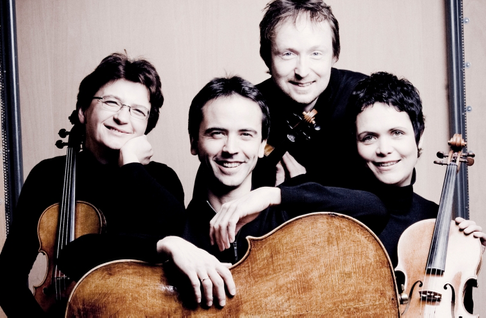 The Arcanto Quartet
The program concluded with Alban Berg’s Lyric Suite. The quartet carefully and succinctly laid out the program of this six movement, late Romantic tone poem exploiting the composer’s fascination for his friend’s married sister. Here the sounds of the quartet delivered a monologue by a brilliant human psyche, no nuance of a very private drama overlooked in this journey into rarefied musical territory.
This concert was Western art at its most refined, its precious moments savored and self-consciously treasured.
On July 16 a magnificent theater of a dead civilization, the ThÈ‚tre Antique in Orange breathed death’s prayer, the requiem mass. It is Verdi’s most terrifying portrayal of any of his tortured souls. In this Orange requiem we were these souls, as indeed was all humanity. 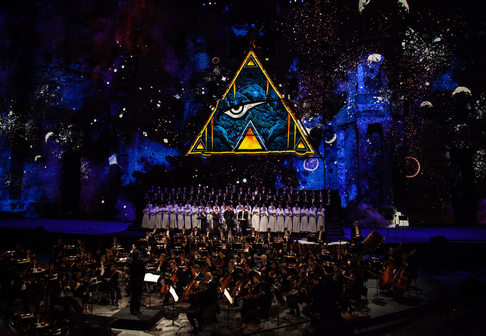 The Eye of Providence, Orchestre National du Capitole de Toulouse, soloists and the OrfeÛn Donostiarra. Photo copyright Kris Picart, courtesy of the ChorÈgies d’Orange
The acoustic of this massive theater is unforgiving, every voice of the awesome Toulouse Orchestra laid bare, the three flutes and two human voices of the Agnus Dei cutting into the hearts of the many thousands of spectators, the 60 centimeter high hammer stokes of the tympani mallets creating the deliberated havoc of an angry God, the huge bass drum thunderclaps burying us in eternal damnation.
The final prayer, the Libera Me, is intoned by the soul graveside who knows its guilt and begs the mercy of God for its salvation. It is delivered by the purist of voices, the soprano whose range belies the innocence of a child, whose warmth encompasses the heart of a woman, and whose primal ancestor was the Eve of original sin.
Russian conductor Tugan Sokhiev with his splendid players, the Orchestre National du Capitole de Toulouse sought universal humanity and not the particular sinner. The operatic drama of the individual soul was drowned by the hugeness of the theater, the one hundred five voices of the OrfeÛn Donostiarra from San Sebastion (Spain) and colossal, non-relevant, confusing and quite colorful iconography of the digital game-like images that were projected onto the huge scaenae frons of the ThÈ‚tre Antique. [This back wall is 61 meters wide by 31 meters high — 200 by 120 feet!]
In the late afternoon of July 17 the Aix Festival gave its final performance of a new opera entitled KalÓla wa Dimna (the names of a brother and sister), based on a Persian fable famous for its transcription by Ibn al-Muqaffa’ (executed in 759 AD) into narrative Arabic — a lion, jackal and raven trick a camel into sacrificing itself. In the opera a king is tricked into executing a poet whose song then posthumously reconciles populace with power. 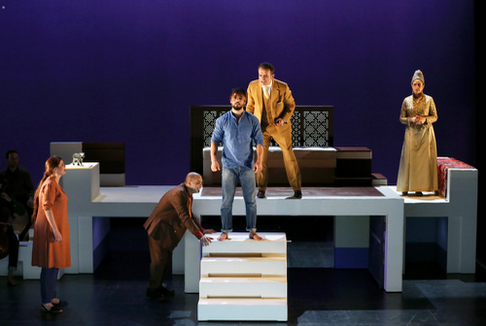 left to right: KalÓla (sister), Dinma (brother), the poet, the king, the queen mother, photo by Patrick Berger / ArtcomArt
French/Palestinian composer Moneim Adwan combined elements of Arabic and Indian musical languages to create the 24 scenes that meticulously spell out deception and revelation. Five singers and five instrumentalists, all born and trained in the classical musical arts of north Africa or the Middle East, discovered many musical moods in richly melismatic singing and what seemed to be virtuoso levels of plucking, bowing, striking, and blowing mostly arabic instruments.
With lengthy narrations and perfunctory staging it was a theater piece with inserted songs more than an opera, and the heavily instructive intention of the story gave it the trappings of dogmatic oratorio. Most striking was the absence of relevance of its message to the Western world, and certainly its absence of relevance to the Arab world, civilizations shaken to their foundations in this twenty-first century. This 68th Aix Festival in particular was laden with social, intellectual and artistic complexities in which this opera was an island of innocence, an interesting and enlightening, too lengthy excursion into an alternative musical language.
The afternoon’s world of Arabic innocence, its innocuous play on power and pity gave way in the evening to the shattering intellectual proportions of an individual soul — the powerful Oedipus. The Grand ThÈ‚tre de Provence hosted Stravinsky’s opera-oratorio Oedipus Rex, the king of Thebes who confronts his blindness to know what he could not know, the savior of Thebes who must confess his sacrileges in searing melismas and become an object of pity. 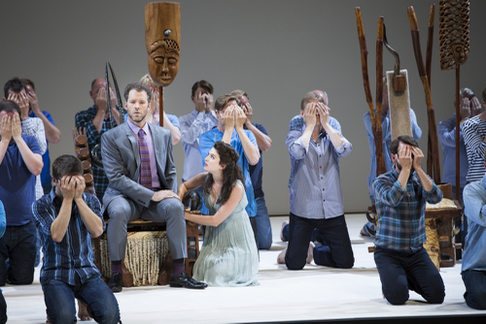 Oedipus and Antigone with singers of the Orphei Dr‰ngar, photo by Vincent Beaume, courtesy of the Aix Festival
Shattering as well was the volume of sound pouring forth from the pit, Esa-Pekke Salonen’s magnificent Philharmonia Orchestra. The 75 voices of Orphei Dr‰ngar, the famed all male choir from Uppsula, Sweden shouted the glory of Oedipus’ power and their anger at his betrayal at unprecedented acoustic levels, and finally whispered their pity for their errant king.
Peter Sellars, the sixty-year-old wunderkind genius of late twentieth century opera ignored the text Stravinsky provided for narrator, making his own narrative adaptation for female voice of the Sophocles tragedy that would continue into Stravinsky’s Symphony of Psalms to complete the evening following an intermission.
This choral symphony was intoned by some seventy Christian singers comprised of members of Orphei Dr‰ngar, plus Sweden’s Gustaf Sjˆkvist Chamber Choir and its Sofia Vokalensemble. The blinded Oedipus, here bravely acted by the now silenced, splendid Canadian tenor Joseph Kaiser was led onto the stage by Oedipus’ daughter Antigone, the narrator for both pieces, and by her dancer sister Ismene (a Peter Sellars addition to the mythic forces at play in the Oedipus Rex). 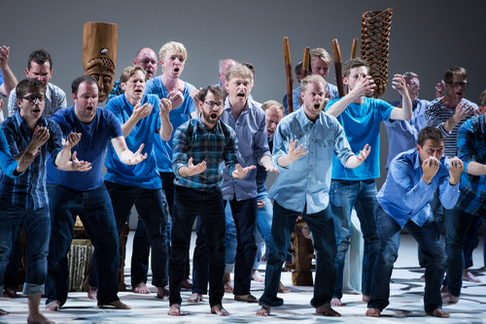 Singers of the Orphei Dr‰ngar, photo by Vincent Beaume, courtesy of the Aix Festival
The Salonen pit begged redemption and peace for the soul of Oedipus in thundering exclamations as the lines of singers moved their arms in synchronized motions indicating abstracted, distilled universal participation in this neo-Classical musical world, Oedipus was led across the stage to be placed in a square of light (outlined by four neon tubes) while the chorus shouted praises of the Lord (Psalm 150). In the midst of this celebration Oedipus walked off stage left. The final image of this Symphony of Psalms was Antigone and Ismene embracing downstage right, each comforting the other.
In the aftermath of the tragedy in Nice each of us in Aix and Orange will have seen and felt these magnificent works of art in our own way. These were my perceptions.
Michael Milenski