In an article in the programme book Michael Grandage explained that the 1960’s setting for the production came about partly because they were looking for a
suitable milieu in which it would be possible for the Countess and Susanna to convincingly swap clothes. Peter Schlesinger’s photographs of the beautiful
people of the late 1960’s provided the inspiration. Another given was the intention to have the action set just in the single day specified in the
libretto, so Christopher Oram’s designs pair a massive, ancient-looking Moorish palace on a revolve with 1960s people, the whole flowing beautifully from
the opening when the Count and Countess arrive early morning during the overture, to the finale in the darkened garden.

I had seen the production when new, when it came to the BBC Proms and also caught it on television, but this was the first time that I had seen it at
Glyndebourne. The advantage of the production is manifestly the great beauty of the sets, the lovely contrast between the Moorish-inspired architecture and
the 1960s costumes, and the remarkably detailed personen-regie ensuring that the characters were both brilliantly realised and finely in period.
And it was both very funny and rather touching. 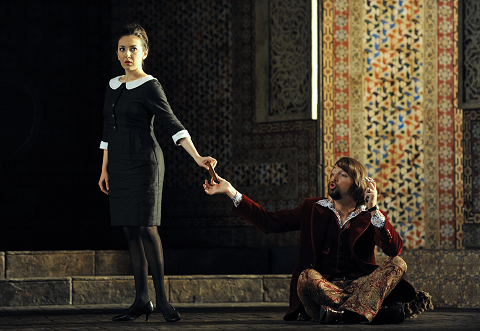 My biggest problem with the production remains the depiction of the Count (Gyula Orendt): a selfish playboy prone to bouts of jealousy, he just didn’t seem
to inspire the sort of fear that would seem to be needed to make the other characters’ behaviour believable. A telling point at the performance was that
when Orendt’s Count went down on one knee at the end of Act Four to beg forgiveness of the Countess (Golda Schultz), there was a small but distinct titter
from the audience. In 1960s guise, with his red velvet jackets and tendency to start jiving, this conception of the Count had too many funny moments.

But thinking about the production, as the performances from Davide Luciano as Figaro, and Rosa Feola as Susanna were so strong, it was as if Michael
Grandage and Ian Rutherford were refocussing the dramaturgy slightly, making the servants the stronger, more dominant characters as the feckless
aristocrats play on around them. 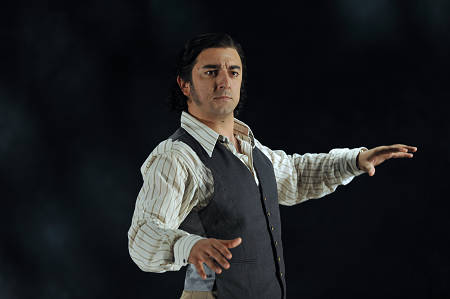 It helped that both Luciano and Feola are native Italian speakers, so that the opening scene had great strength and vitality in their use of language.
Luciano’s strong, rather virile performance reminded me that in the original play Figaro had a number of Revolutionary sentiments (which were stripped out
by librettist Lorenzo da Ponte). Here was a Figaro less the charmer and more the schemer, quick to jealousy and full of passion. Luciano’s musical
performance was to match, singing with a sense of a strong line and with a feeling of suppressed anger. Rosa Feola as Susanna was poised and elegant, again
with an inner strength combined with suppleness of line. You felt that Feola could have easily taken on the role of the Countess, and her account of ‘Deh
vieni’ gave us some of the finest singing of the evening.

Against this pair, the self-indulgent, rather feckless Almavivas did not stand a chance. Golda Schultz’s Countess, floating around in her kaftans, was all
elegant charm with no real core to her character. Schultz sang warmly vibrant voice, drawing on a lovely sense of elegant personality in the recitatives
and beguiling as she should. But ‘Porgi amor’ seemed to lack a real sense of line and felt a little too much like a series of isolated, albeit beautiful,
notes, though her account of ‘Dove sono’ had a touching melancholy about it. Gyula Orendt’s Count was beautifully sung, within the confines of the
character as conceived in this production. Orendt could spin a beautiful line, yet also be quick to anger and his pacing of the long comic scene which ends
Act Two was simply brilliant.

Natalia Kawalek was a piece of relatively late casting as Cherubino. Kawalek made a wonderfully convincing youth, and her impulsively sulking performance
really helped ground the drama in the naturalism which Grandage clearly desired. Musically she seemed to take some time to warm up, and ‘Non so piu’ seemed
to lack the sort of relaxed refulgence of tone which is ideal in this role, though ‘Voi che sapete’ was sung with great charm. 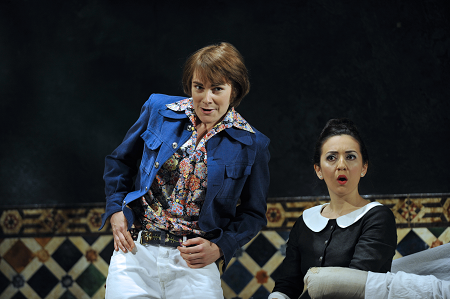 Carlo Lepore was a striking Don Bartolo, rather slickly untrustworthy yet touching when he discovers Figaro is his son. Susan Bickley made a delightful
Marcellina, matronly but elegant and full of character, it was a shame that we did not get her aria. Neither did John Graham-Hall’s oily Don Basilio get
his aria, though Graham-Hall was a complete delight as this odious character. Nikola Hillebrand was a leggily elegant Barbarina, cavorting with Natalia
Kawalek’s Cherubino and singing her Act Four aria with poise.

The smaller roles were all strongly taken with Alasdair Elliott as Don Curzio, Nicholas Folwell as Antonio, and Julia Hamon and Alison Langer as the
bridesmaids. Like the rest of the cast, the chorus clearly had great fun with the 1960s visual details of the production, and helped to bring the ensemble
scenes alive. Though I have to confess that I found the choreography (originally by Ben Wright and revived by Kieran Sheehan) relied a little too much on
fitting 1960s dance moves to period music, a trope that can easily weary.

From the opening notes of the overture, Jonathan Cohen and the Orchestra of the Age of Enlightenment gave us a crisply vivid account of the score. Cohen
used the period instruments to keep the textures light, yet vivid, and to allow the music to move without seeming overly rushed. Individual numbers were
shaped finely, but there was an over-arching sense to the performance too, matching Grandage’s desire to have the action move seamlessly through the day.
There was some lovely continuo playing from Ashok Gupta (forte piano) and Jonathan Manson (cello), responsive and imaginative without overly drawing
attention to itself.

All concerned brought out that combination of pathos, humour and tragedy which is the work’s hallmark, and if the great moments did not quite move us as
much as they could, overall this was a vividly engaging production, with a cast of beautifully realised characters.